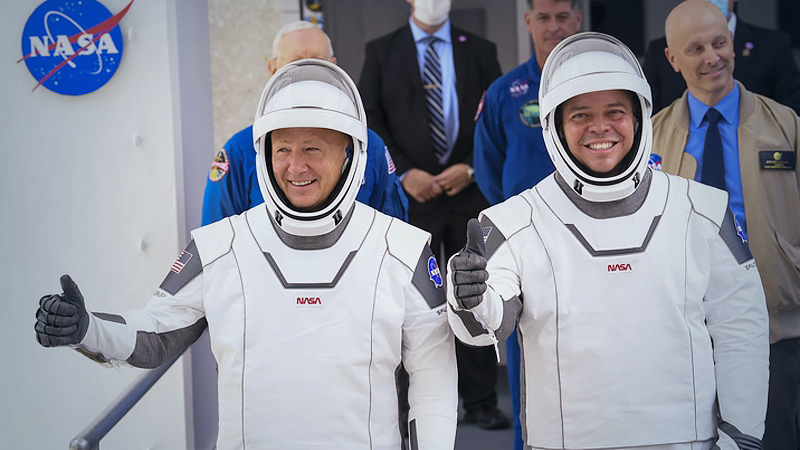 NASA commercial crew astronauts Doug Hurley, left, and Bob Behnken leave for their flight aboard the SpaceX Falcon 9 rocket on May 27, 2020. MUST CREDIT: Washington Post photo by Jonathan Newton

They've been up there about a month now, floating around on the International Space Station, keeping tabs on their ride home.

One, NASA astronaut Bob Behnken, has taken a pair of spacewalks. The other, Doug Hurley, has turned his Twitter feed into a startling exhibition of Earth art photography.

Both have been monitoring the health of the Dragon spacecraft that ferried them to the station, and will, in a few weeks, carry them home in a perilous second leg of their historic test mission.

On May 30, the pair became the first NASA astronauts to launch on a commercial rocket to the station, hitching a ride on vehicles manufactured by Elon Musk's SpaceX, not NASA.

A day after lifting off from the Kennedy Space Center, their Dragon spacecraft, which they named Endeavor, docked with the station autonomously, and the duo were greeted on the station by fellow NASA astronaut Chris Cassidy, as well as Russian cosmonauts Anatoly Ivanishin and Ivan Vagner.

The journey marked the end of a long fallow period of launches for NASA, which had not flown humans from United States soil since 2011, when the Space Shuttle was retired.

"Certainly, the highlight for both Doug and I was the initial arrival at space station, coming through the hatch again and being on board after several years of working on a new spacecraft," Behnken said in an interview from the station this week.

Since then, he has performed two spacewalks with Cassidy, successfully replacing batteries on the outside of the station. During the spacewalk, they were able to see the Dragon spacecraft docked to the station, and Cassidy turned and took a photo.

"It was just awesome to be able to look back and snap a picture, and I think we got a good daylight shot," Behnken said.

Hurley has spent a fair amount of time in the station's cupola, a small dome with six windows that provides some of the best views. As the station orbits the Earth every 90 minutes, traveling 17,500 mph, he's captured stunning images from all around the globe, posting them to his Twitter account.

Here was the Saharan dust plume and the western Atlantic Ocean. Here were clouds coiled like Rorschah inkblots over the South Pacific; Iran's Lake Urmia, clouds framing the St. Lawrence River; the tan expanse of the Middle East, and the deep blue of the Pacific off the southern California coast.

And then on Thursday, he posted a shot of the Earth transitioning from day to night, one half dark, the other light. It is a peaceful image with no hint of the turmoil of the coronavirus pandemic or the social unrest following the death of George Floyd while in policy custody.

"Look at the atmosphere!" Tweeted Hurley's wife, Karen Nyberg, a former NASA astronaut. "It is such a gorgeous blue, and so thin. @Astro_Doug has been taking some beautiful pictures of earth from @Space_Station. They serve as reminder to me that this amazing home belongs to all of us, together."

NASA celebrated the mission as the beginning of a new era in human spaceflight, one where the private sector would play a larger role. President Donald Trump and Vice President Mike Pence were at the Kennedy Space Center for the launch, and afterward, Trump heralded it in a speech as a victory for the country.

"A new age of American ambition has now begun," he said. "Those of us who saw the spectacular and unforgettable lift off this afternoon watched more than an act of history. We watched an act of heroism."

The Trump campaign sought to seize on the launch with an ad titled "Make Space Great Again." But the ad was quickly criticized by Democrats, who pointed out that NASA's "commercial crew" program - the hiring private companies to fly its astronauts - began under President Barack Obama. Others said it violated NASA rules that prohibit the agency from endorsing "a commercial product, service or activity."

Nyberg, who was featured in the ad with her son, said on Twitter that she found it "disturbing that a video image of me and my son is being used in political propaganda without my knowledge or consent. That is wrong."

The ad was abruptly taken down.

Now, NASA and the astronauts are turning their focus to the return trip. At the moment, the space agency says the soonest Behnken and Hurley could return is Aug. 2. If all goes well, the Dragon would undock from the station, fire its thrusters and descend through the atmosphere.

The entire mission is a test to see how SpaceX's Dragon capsule performs, and while NASA said its ascent went flawlessly, there still are many risks ahead.

As it plunges down, the thickening air will cause friction and generate enormous heat, testing the capsule's heat shield. Then the spacecraft's parachutes are to deploy to slow the vehicle further. SpaceX has struggled with its parachute designs in the past, however.

Another risk will be landing in the ocean. American astronauts have not splashed down in the water since 1975 - the Space Shuttles landed on land, as do the Russian Soyuz spacecraft.

Behnken said he and Hurley expect to spend about an hour bobbing on the ocean surface before they are hoisted on the deck of a ship. SpaceX has been training extensively for the recovery mission, working to get the astronauts to safety as quickly as possible, but that will also be a key test.

"I wouldn't call it nervousness," Behnken said. "But one of the areas that both Doug and I really need to make sure that we're prepared for is that if something doesn't go as smoothly as expected with that recovery operation and we end up in that capsule for a little bit longer."

He added: "We need to be on top of our game, both physically and mentally."