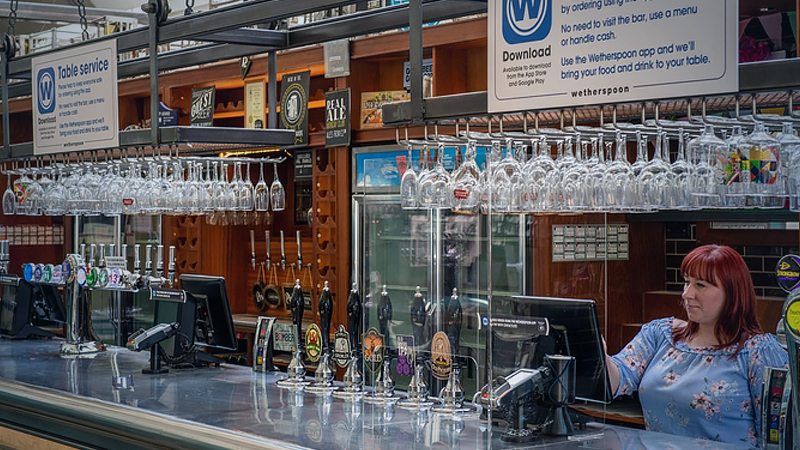 An employee checks a till behind a screen at a pub in London on June 24. MUST CREDIT: Bloomberg photo by Chris J. Ratcliffe

Pubs, bars and restaurants in England opened their doors on Saturday, putting a million people back to work, in the biggest loosening yet of the lockdown the U.K. imposed in late March.

More than half of food and drink businesses plan to open on what's been dubbed "Super Saturday," but just 19% of consumers say they're planning to go out on the first day. How quickly pubs recover will largely depend on how willing punters are to leave the lockdown behind.

"I expect our entire sector will be incapable of making a profit for 12 months," said Roger Ward, owner of Mr. Thomas's Chop House in central Manchester, setting a gloomy tone that matched the northern city's skies.

Hospitality represents 5% of the U.K.'s economic output and employs 10% of all workers, trade group UKHospitality said. The industry generates about 38 billion pounds ($47 billion) of tax for the government every year and is the country's third-largest private-sector employer, double the size of financial services and bigger than automotive, pharmaceuticals and aerospace combined.

"It's a ghost town" in central Manchester this morning, said Barry Hayes, who has owned and managed the Circus Tavern for a decade. "I'm thinking, will it ever come back?"

Boris Johnson urged Britons to act responsibly and sensibly as hotels, cinemas and hairdressers also reopen. The U.K. has suffered one of the deadliest outbreaks of the pandemic, with more than 44,000 deaths and 285,000 confirmed cases.

Those brave enough to shake off the shackles of lockdown relished the return of their weekend pint after months of being shut out.

"The pubs reopening is a win-win situation, because we can do our bit and support small businesses all while downing a Guinness or two," Penny Hackett, a secondary-school teacher from Wolverhampton in the West Midlands, said in the Railway Tavern where more than 20 customers were queuing outside by 7 a.m.

The reopening is a cautious one. At the same time as Johnson was urging Britons to return to pubs, the government was imposing a new lockdown on the city of Leicester in the East Midlands, where cases have been on the rise.

The pubs that do reopen will face higher costs for everything from staffing to technology. The New Inn in North Yorkshire expects to lose between 35% and 40% of capacity due to requirements that customers stay at least 1 meter (3.3 feet) from other groups.

Staff costs are "massively increasing" said Tom Ledsham, 26, who took over the pub and hotel with his parents in February. An average Monday shift, which ordinarily would only have required one employee, will now need three.

Staff will wear protective gear and have their temperatures checked daily and plastic screens have been installed around cash registers. The pub is also using disinfectant fogging machines, more often seen in airplanes and hospitals, to clean its 18 bedrooms and the pub area more quickly and cost-effectively.

"We are number-crunching constantly because before you know it, you can have spent 5,000 pounds overnight," Ledsham said. "It is going to be challenging but we need to start bringing some revenue in."

Guests will have to provide their names and phone numbers upon arrival, in case an infection emerges and they need to be contacted about possible exposure. Many places are asking people to book ahead. That's adding costs too, Ledsham said.

Pub and restaurant owners are counting on pent-up demand to drive a rebound. The combination of billions of pounds in government support for furloughed workers, coupled with a drop in spending during the lockdown that has underpinned savings, could support consumption, said Dan Hanson of Bloomberg Economics.

The government aid has replaced about 57% of the hit to take-home pay caused by the job losses during the lockdown, while savings jumped to 21% of disposable income in the second quarter, compared with 8.4% in the previous three months, Hanson estimated.

"We've had a very difficult time with the furloughed money; the system doesn't work for us," said Benjamin Iles, landlord of Popcorn and the Marlborough Arms pubs in Chester in northwest England. Iles spent 85,000 pounds of his own wedding fund trying to keep staff afloat.

Undeterred though, Iles is opening his larger venue Saturday and has already taken 1,000 reservations for the coming week.

"There are many other pubs that won't be able to open yet, which means we're going to be even busier for a while because other venues aren't there for demand," he said.

Reopening will be a fragile process, said James Watt, the co-founder and CEO of BrewDog Plc. It isn't just new outbreaks or lockdowns that have him worried -- it's how an industry that's predicated on drinking and socializing responds to a crisis that isn't going away.

"We need to build up consumer confidence and show that it's a safe environment, but if some places don't behave responsibly and there's a backlash, that won't just shake confidence in one business but across the entire sector," Watt said.

That confidence was clear on Saturday among some regular customers at the Milk House in Sissinghurst in Kent, southeast of London, where staff are enforcing a one-way system and wearing large clear visors.

"I've saved a fortune over lockdown, about a grand," said Keith Borough, a dance-floor technician. "I could buy a car."