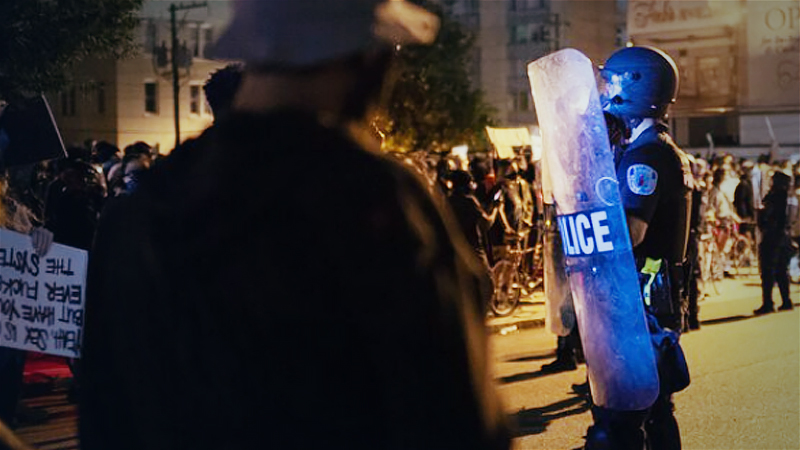 File photo: Large number of people in the U.S. protest against police brutality and racial injustice.

Kimberly Reese has never visited Ghana, but she is already designing her dream home there. The Ohio mother of five says she doesn't feel safe in the United States.

She'd rather focus on floor plans some 6,000 miles away.

As the United States again confronts its history of racism, as outrage again erupts over police killings, leaders in Ghana say they're rolling out the welcome mat for black Americans who want to get away from the turmoil.

The government has negotiated with local chiefs to earmark 500 acres of land near the nation's center for newcomers, carving out enough space for about 1,500 families. Survey and registration fees are waived for members of the African diaspora.

The effort grew out of a public campaign called the Year of Return, which attracted a record number of tourists to the West African country last year - four centuries after the first slave ship reached Virginia - and aims to convert visitors to residents with special land deals, expatriate guides and easier paths to citizenship.

"We want to remind our kin over there that there is a place you can escape to," said Akwasi Agyeman, chief executive of the Ghana Tourism Authority. "That is Africa."

Reese, who owns a public relations agency in Cincinnati, heard about the deal from her close friend and business partner, who is from Ghana.

She can work anywhere with an Internet connection and has tucked away savings from her time in corporate America, where a manager once said her natural hair was inappropriate for the workplace.

Now old pain swirls with renewed fears: What if police stop her teenage son on his walk to the recreation center?

"It isn't like that in Ghana," she said. "You don't have to worry about being black."

The number of visitors in 2019 from January to September leaped by 237,000 - a 45 percent increase, according to the Ghana Tourism Authority. Most came from the United States.

Officials are building on that upswing with a 10-year program, launched in June, to entice people to keep their talents (and money) in Ghana.

Outreach has ramped up since the killing of George Floyd in the custody of Minneapolis police, which set off protests worldwide - including in Ghana's capital, Accra.

President Nana Akufo-Addo sent the country's traditional kente cloth to Floyd's family after his funeral in Houston. Mourners held their own memorial for the slain American in seaside Accra, chanting some of his last words, "I can't breathe."

"We continue to open our arms and invite all our brothers and sisters home," Barbara Oteng Gyasi, Ghana's tourism minister, said at a televised ceremony. "Build a life in Ghana. You do not have to stay where you are not wanted forever."

Ghana has extended such invitations for decades.

After the country declared independence from Britain in 1957, the first prime minister, Kwame Nkrumah, received a series of American civil rights leaders.

"He thought the independence of Ghana was meaningless without the total liberation of people of African descent everywhere in the world," said Kevin Gaines, a professor of civil rights and justice at the University of Virginia.

Martin Luther King Jr., one of his first guests, told his congregation that Nkrumah had urged them to come and help build the new nation.

A handful of Americans accepted that mission. Among them: Pauli Murray, a prominent activist and lawyer who landed at the Ghana School of Law in Accra.

"She lacked professional opportunities and ended up helping Ghana develop its legal and constitutional infrastructure," said Gaines, who wrote a book about the period.

The movement stalled after a coup ousted Nkrumah in 1966 and autocracy swept much of the continent.

Some view the arrivals as wealthy outsiders in a country where 30 percent of the population lives on less than $3.20 per day.

The government has urged people to stop calling them foreigners. (A previous marketing campaign cast the Americans as "brothers and sisters.")

Not everyone feels welcome: A colonial-era law still criminalizes homosexuality. The rule is rarely enforced, but LGBT activists in Ghana say it fuels discrimination and harassment.

People are angry about Floyd and others who met violent ends at the hands of law enforcement. About the coronavirus killing disproportionately high numbers of black Americans. About President Trump retweeting a video that featured a supporter yelling, "White power!"

"With the political climate, people are really looking to get here as soon as they can," Cheetham said.

One is Kindra Parker, 42, who spent this week packing up her house in Detroit.

The music publicist fell in love with Accra when she visited in 2018 and planned to return for two months this spring. Her fiance grew up there. Then the pandemic hit, and Ghana suspended international flights.

Parker had never felt so trapped in America.

"I'm scouring my house, purging it, throwing everything away," she said. "As soon as the borders open, I'm out."

She plans to get married and stay in Ghana for the long haul.

Parker had long sensed that racism was holding her back. Her credit was good - why did that bank deny her a loan?

And her industry seemed to have a titanium ceiling. Maybe she didn't have to work twice as hard as her white peers to advance in Ghana.

"Everyone says, 'Ghana has its problems, too,' " she said. "Of course it does. However, it's 63 years old. How old is America? We've had a minute to get this right."

The headlines have exhausted Khadijah Polly, 38, who owns a popcorn company in Houston.

Her mind has lately strayed to Ghana, where one trip turned into a three-year visa's worth of regular visits.

Polly craves the rooftops, the ocean, the pineapples she swears are uniquely tasty, the relaxation she rarely finds in the United States.

"Initially when I got there, I had zero expectations," she said. "Then something felt familiar - like home - and that's when I made the connection: 'Oh, this is what it's like to just walk.' "

Now she's sure: The country holds her future.

"Do I want to have the feeling of being free and excited and curious?" Polly said. "Or do I want to continue to feel frustrated, sad and disrespected?"

Reese made a similar calculation in deciding to leave Ohio.

She's eyeing a plot near Kumasi, the capital of the southern Ashanti region.

"There are some gorgeous houses going up," she said. "They're making it very reasonable, very affordable."

That she has never been to West Africa doesn't concern her. She has felt pulled toward the region for years. Her boyfriend is from Ghana. Her former husband is Nigerian. (She has been to South Africa.)

Her ticket to Accra is booked. She's studying one of the local dialects, Twi, and mulling dual citizenship.

"Ghana is a very peaceful country," she said. "We want to experience that. We want to reconnect with our ancestors. We want to teach our kids our true history."

The next step is the construction blueprint.

Reese is torn between a two-story home with a generous veranda and something more original: a circular model meant to blend with the forest.