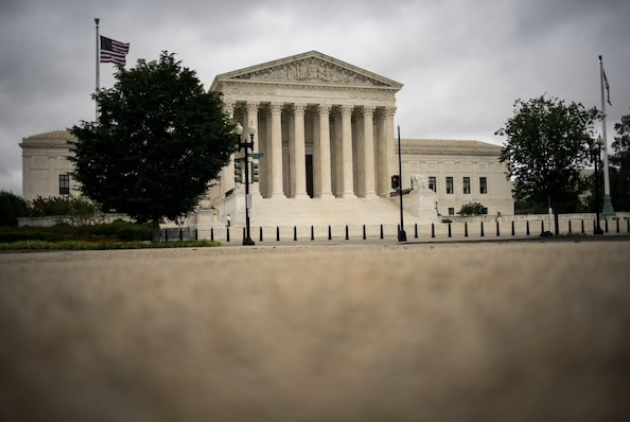 The Supreme Court building in Washington, D.C., on June 17. MUST CREDIT: Bloomberg photo by Al Drago

The Supreme Court is poised to cap a term like no other with potentially blockbuster decisions covering birth control, religious rights and President Donald Trump's efforts to keep his financial records private.

The justices will tackle their eight remaining cases starting Monday, when they issue opinions in July for the first time since 1996. The eight cases were heard in an extraordinary May argument session, held by telephone because of the coronavirus outbreak. The justices could finish their work later in the week.

Together, the final opinions could rewrite the narrative of a Supreme Court term that so far hasn't produced the clear conservative shift some envisioned after two Trump nominees joined the court. The rulings will shape public perceptions of the court, and perhaps of Trump, heading into the November election.

Here are the top cases the court still must resolve:

House Democrats and a New York state prosecutor are separately trying to get Trump's accounting firm to turn over his financial records, material that could include the tax returns he has long refused to release publicly. The House committees are also subpoenaing the president's banks.

Trump says lawmakers are trying to engage in law enforcement, which his legal team argues is beyond Congress's constitutional powers, particularly when it involves the president's private affairs. And Trump contends presidents should have absolute immunity from state criminal investigations while in office to ensure against unwarranted distractions.

For his part, Manhattan District Attorney Cyrus Vance Jr. says Trump is trying to put the president above the law. Vance is investigating whether the Trump Organization falsified business records to disguise hush payments to two women who claimed they had sex with Trump before he took office.

The House case could have the most tangible political impact. If the court upholds any of the four subpoenas, Democrats would get access to a trove of financial records involving Trump, his family and his business - and could make those documents public before the election.

Both cases also could have profound long-term ramifications, potentially giving presidents sweeping new protections from investigations, at least while they are in the White House.

The Trump administration is seeking to give employers and universities a broad right to claim a religious or moral exemption from the Obamacare requirement that they offer free birth control through their health-care plans. The opt-out would expand a narrower religious exemption offered by President Barack Obama's administration as part of the Affordable Care Act.

Although the case could turn on technical questions of federal administrative law, its symbolic and cultural implications loom much larger. And a high court blessing for Trump's opt-out could mean that tens of thousands of woman would lose access to free contraceptives.

The administration is arguing alongside the Little Sisters of the Poor, an order of Catholic nuns that says it is trying to avoid having its employee health-care plan "hijacked" to provide birth-control coverage.

As in many of the court's cases, Chief Justice John Roberts may wield the pivotal vote. During arguments in May, he said the Trump exemption "reaches far beyond" the Little Sisters' concerns. "In other words, not everybody who seeks the protection from coverage has those same objections," he said.

The contraceptive clash is one of two remaining religious-rights cases. The court also will decide whether to extend a previous ruling that shields faith-based organizations from discrimination claims by ministers. Two Roman Catholic grade schools in Southern California say that exemption should also apply to teachers who carry out important religious functions.

In the 2012 case, Roberts said a religious group has a constitutional right to "shape its own faith and mission through its appointments." That unanimous decision threw out a suit by a grade-school teacher who had completed a required theology program and been given the title "minister of religion."

Federal appeals court panels said the circumstances were different in the latest cases because the instructors held the title of "teacher," lacked any special religious training and didn't hold themselves out as religious leaders or ministers. The schools are being accused of age and disability discrimination.

The Supreme Court's conservative wing has been broadly supportive of religious rights in recent years. On Tuesday a divided court bolstered the school-choice movement by ruling that states must include religious schools in programs that offer taxpayer subsidies for private education.

The pending issue that could most directly affect the November election involves so-called faithless electors, people who cast their votes for president in the Electoral College for someone other than the winner of their state's popular vote.

At issue in cases from Washington and Colorado is whether states can penalize, or remove, a faithless elector. The Supreme Court ruled in 1952 that states could require electors to support their party's nominee, but the justices have never said whether states can take enforcement steps.

A sleeper case could wipe out the 1991 federal ban on robocalls to mobile phones. The law is being challenged on free speech grounds by Democratic Party officials in Oregon and Washington and a trade group that represents political consultants.

A lower court tossed out an exception in the law for calls made to collect debt owed to the federal government. But that ruling had the effect of expanding the ban, and the challengers are looking to invalidate the entire law before the election so they can ramp up their activities.

Finally, the Supreme Court could rule that much of eastern Oklahoma is still American Indian territory - and cast doubt on the state's authority to prosecute crime and enforce regulations there. A convicted child molester is arguing that Oklahoma lacked authority to prosecute him because he's a Native American whose alleged crime took place within the boundaries of the Creek Nation reservation.

The core issue is whether Congress took the necessary steps to "disestablish" the Creek reservation in preparation for Oklahoma becoming a state in 1907.