Amnesty International Thailand called on Cambodian Prime Minister Hun Sen to ensure “timely investigation of the abduction” of government critic Wanchalearm Satsaksit, in an event titled “One Month of finding the truth”, organised by the human rights organsation and the Satsaksit Family at Angoon Children’s Park in Bangkok’s Wattana district on Saturday (July 4) to mark the one-month anniversary since Wanchalearm disappeared in Cambodia.

The 37-year-old political critic was abducted by unknown persons from outside an apartment building in Phnom Penh on June 4. Wanchalearm fled Thailand in 2014 after the military seized power, and has been a vociferous critic of the Prayut administration ever since, broadcasting his views on Facebook.

“If the culprits are found, they must be given a fair trial in a civilian court with a guaranteed no-death penalty,” she said. “Cambodia must also follow international human rights laws on forced disappearances and must not send Wanchalearm back to Thailand, where his human rights are likely to be violated.”

After the speech there was a screening of documentary film “Klai Baan” (Away from home), directed by Theeraphan Ngaojeenanat, which was awarded best documentary film by the Bangkok Critics Assembly. The film portrays the story of Wat Wanlayangkur, a famed writer who went into self-exile from the country after the 2014 coup d’etat.

Wanchalearm’s sister Sitanan Satsaksit, 47, said she had tried every possible way to track the whereabouts of her brother, including submitting an appeal to both Thai and Cambodian authorities.

“The Office of the Attorney-General has said that before starting the investigation they must first receive a confirmation from the Department of Special Investigation that they will take the case, which I had submitted in an appeal on June 25, and they had said it would take at least 15 days to consider. We also hired a lawyer to file a case with Cambodian authorities, but they immediately rejected this,” she said.

“I was the last person Wanchalearm talked to on the phone before he was abducted. I have CCTV footage that shows the car that took him, with clear view of the licence plate. However, Cambodian authorities have refused to accept the case, so we cannot continue [with any legal proceedings] there. I have been praying for his survival in the past month, although my hope grows dimmer by the day,” Sitanan said.

“All I want is confirmation of his whereabouts,” she said. “In case he has died, I want to bring his body back to Thailand for a funeral. Dead or alive, I just want him to come home,” she said.

Sitanan said her brother left the country after the 2014 coup and had lived in several countries for two years before settling in Cambodia, as their family had an acquaintance there who could give him advice on doing business.

“Wanchalearm engaged in several businesses in Cambodia, including running a restaurant and doing farming. He is well loved and shouldn’t have been in conflict with anyone there,” she pointed out. 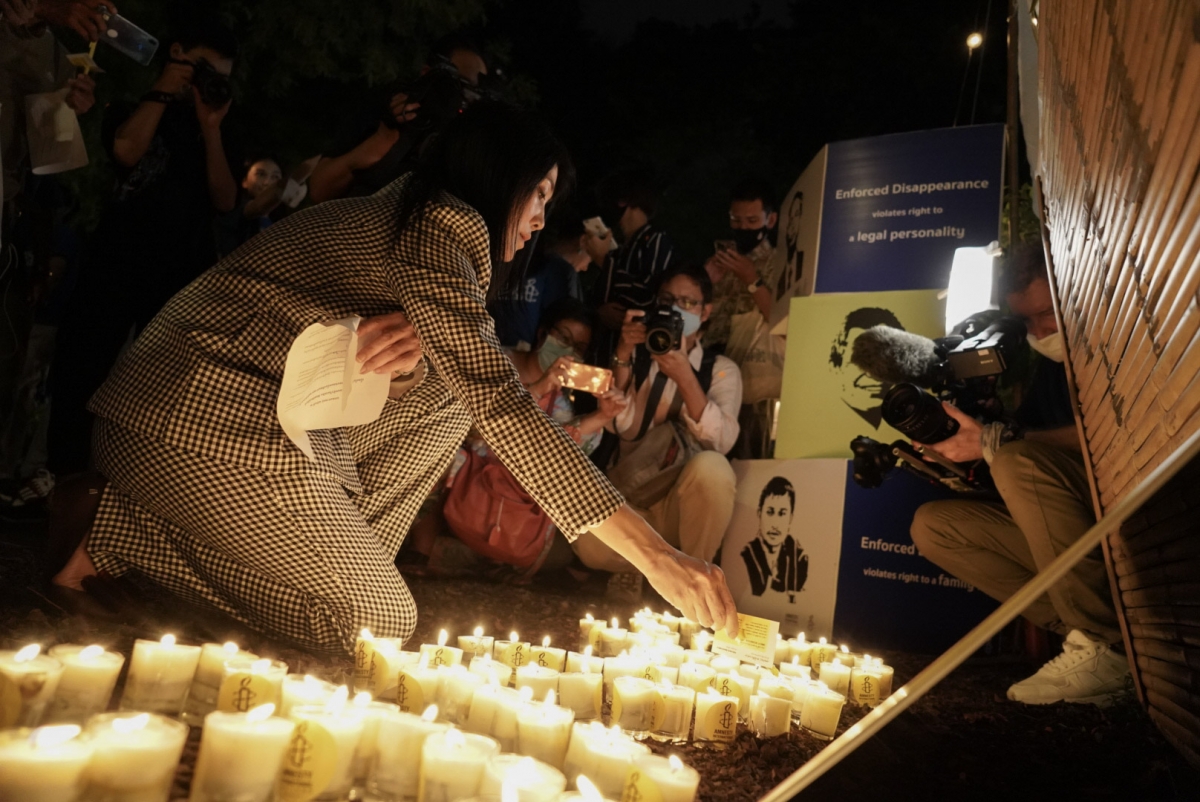 “Forced disappearance is horrible and is something that can happen to anyone anywhere and at any time. We hope that what happened to Wanchalearm will be the last time such an incident takes place, although there have been at least eight political Thai refugees who have been forced to disappear while staying in neighbouring countries. Of these, only two bodies of the victims were found, both indicating that they were brutally tortured and killed. We, however, hope that the persons who did this will have mercy on Wanchalearm and let him come back to the loving arms of his family,” Sitanan said in closing remarks.

Participants at the event then lit candles and placed them at Wanchalearm’s portrait to signify their faith in human rights, non-violence and freedom of speech.