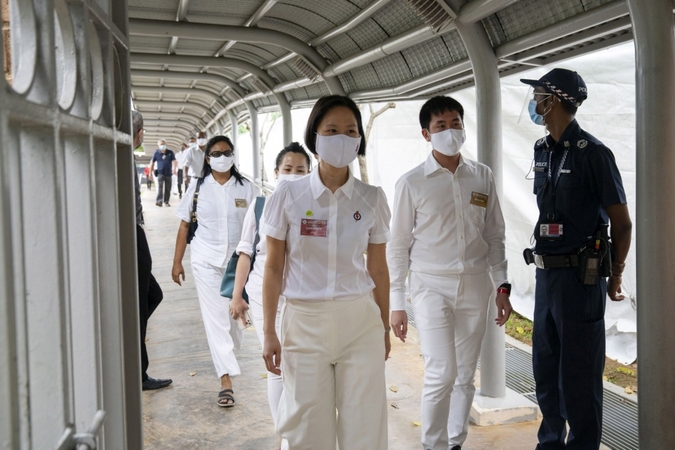 Packed rallies are out, along with their cheers and jeers. In comes the Internet, with its memes and trolls.

The era of social distancing ushered in by the deadly coronavirus has forced Singapore's political parties to face off online in the lead-up to a national election in less than a week.

"Compared to past elections, parties clearly are adopting a more experimental approach to sustain people's interest and meet different needs," said Carol Soon, senior research fellow and head of the society and culture department at the Institute of Policy Studies in Singapore.

Though previous elections have increasingly seen political parties vie for attention online, social media is quickly shaping up to be a key pillar in campaign strategies this time around. The shift comes as politicians face public health restrictions on election activities with the island still grappling with virus infections. That includes the scrapping of physical rallies, typically held outdoors at stadiums which sometimes attract tens of thousands of voters.

Social media has presented an opportunity for these parties to obtain greater access to voters, many of whom are digitally-savvy and increasingly politically engaged.

Ahead of the July 10 polls, most opposition parties have sought to reach more voters by bolstering their content on Facebook, Instagram and Twitter. They are also making use of the ability to conduct live video broadcasts on platforms such as YouTube and Zoom.

To facilitate online campaigning, venues have been provided for candidates to do live streaming at certain time slots throughout the day during the campaign period, equipped with Internet connectivity at subsidized rates.

Minutes after Parliament was dissolved in June, the Workers' Party - the main opposition force - posted a video introducing the 12 candidates it intends to field in the coming polls. The video of its line-up of candidates smiling for the camera and set to soaring music has garnered 210,000 views to date.

Tan Cheng Bock, the 80-year-old leader of the Progress Singapore Party, became a sensation after he attempted to use millennial slang while addressing the press during a walkabout. Tan has avidly posted content on Instagram, including a video showing how he types with a single finger, in an effort to relate to younger voters.

"Cyberspace has helped open up Singapore's political culture," said Cherian George, a professor of media studies at Hong Kong Baptist University's School of Communication. Whether that would have an impact on "electoral outcomes is a very different question. So far, the answer is no," he said.

The Singapore Democratic Party said it's "constantly looking for ways to creatively" get its message out on social media, but there still are limitations to the online reach. "We have always depended on rallies and large walkabouts which are banned for this election," Chairman Paul Ananth Tambyah said in an emailed response to questions.

Many of the country's present ministers, who hail from the ruling People's Action Party or PAP, already are established on the same online platforms. The party has governed the Southeast Asian nation since independence in 1965. While Singapore doesn't allow opinion polls, most analysts expect the PAP to easily win again in a race that will see all 93 seats contested by at least two parties for just the second time.

The PAP has revved up its social media activity by posting video segments explaining the party's stance on key policy issues. It's focused on the government's handling of the coronavirus and the economic fallout. Ministers are also posting more updates about their activities on the ground during the campaign season. Collectively, the posts have garnered thousands of likes.

But with greater access also comes greater scrutiny. Social media has proven to be a double-edged sword that can inflict damage on the image of candidates and parties as well.

Deputy Prime Minister Heng Swee Keat's 'East Coast plan' blunder during a speech last week was widely shared, leading to memes poking fun at him and his comments. Heng is widely seen as the PAP's successor to current Prime Minister Lee Hsien Loong. The Progress Singapore Party's Tan -- a former PAP lawmaker -- also had a near slip in rallying support for the ruling party instead of his own.

On Sunday, Workers' Party candidate Raeesah Khan publicly apologized for her previous online remarks about how law enforcement treats different groups in Singapore. The apology came after authorities announced that police reports had been lodged against Khan for the social media posts, which date back to 2018 and also one earlier this year.

Promoting enmity between different groups on the grounds of race or religion under the country's penal code could warrant up to three years in jail, a fine or both. Police said investigations are currently ongoing.

Earlier as elections in the country kicked off, PAP candidate Ivan Lim faced a wave of allegations online over his behavior when he was in the military and as an executive at a unit of conglomerate Keppel Corp Ltd. Lim withdrew from contest shortly after, saying he didn't want the allegations to distract from the PAP's efforts. The incident prompted Prime Minister Lee to caution against a "culture of trial by the Internet."

"It sets a very damaging precedent that you can condemn somebody and write him off on the basis of an Internet campaign," Lee said at a virtual press conference on June 29. "We don't have time to settle it now, but we can't simply write off and destroy people like this."

In October, Singapore enacted a fake news law that empowers the government to issue correction orders and even force social media platforms to restrict access to web-based content it deems untrue. Officials have said the law is needed to quell errant online information -- drawing criticism from the opposition and even Facebook Inc., amid concerns it would set a precedent for stifling free speech.

Since general elections were announced by the prime minister last month, officials continued to invoke the law. Correction orders were issued over the weekend against the Singapore Democratic Party and various media over statements about the city-state's population target, as well as carrying comments made by an opposition leader on migrant workers' virus testing.