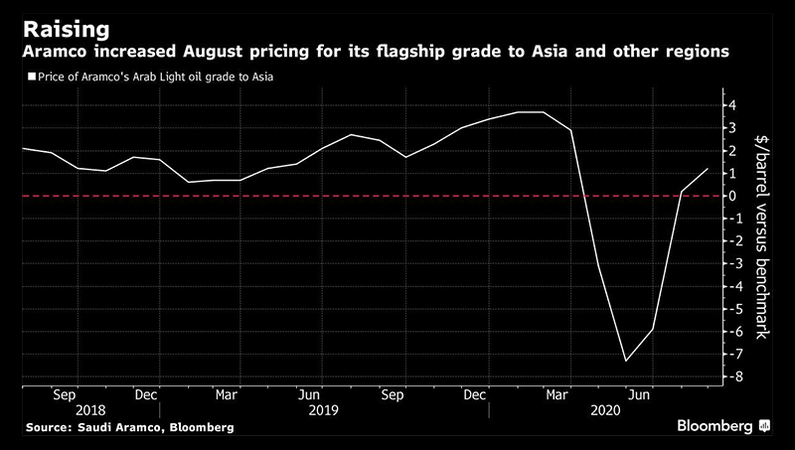 Saudi Arabia raised pricing for August oil shipments to Asia, the U.S. and northern Europe amid signs that energy demand is recovering from its coronavirus-triggered collapse.

The world's biggest crude exporter is increasing rates as it pushes other major producers to keep cutting supply to rebalance the market.

State producer Saudi Aramco lifted the official selling price for its flagship Arab Light crude to buyers in Asia, its biggest market, for a third consecutive month, though by less than expected. Aramco raised pricing to the U.S., where it's also reining in shipments, for a fourth month.

"The increase in prices reflects the overall recovery in oil markets," said Carole Nakhle, chief executive officer of London-based consultant Crystol Energy. "Demand growth remains uneven and may even be subject to temporary reversals, but it is unlikely to fall off a cliff because lockdowns, if reintroduced, are likely to be more localized."

Arab Light crude to Asia rises to $1.20 a barrel above the Middle East benchmark, compared with a 20-cent premium for July, the company said in a statement. Traders and refiners, who are struggling with low margins, expected the premium to climb to $1.45, according to a Bloomberg survey.

Aramco raised U.S. pricing by between 20 cents and 40 cents a barrel. Light crude will sell at a premium of $1.65 a barrel, up by 30 cents, the company said. It also increased prices for most grades sold to northwestern Europe -- the main hub for which is Rotterdam. The only reductions are to the Mediterranean region, where Aramco pared prices by as much as $1 a barrel.

Saudi Arabia and Russia have led efforts by the OPEC+ producer alliance since last April to reduce output and drain stockpiles. The group agreed in June to extend cuts totaling nearly 10 million barrels a day -- roughly 10% of world supply before the pandemic hit -- for a third month until the end of July. They plan to scale them back after that.

OPEC+ is "on the right track" but still has "a long way to go" before rebalancing oil markets, Saudi Energy Minister Prince Abdulaziz bin Salman said in mid-June. The Saudis slashed their crude shipments in June to a multiyear low, according to Bloomberg tanker tracking.

Brent crude has more than doubled since OPEC+'s April agreement to around $43 a barrel. The global benchmark is still down 34% this year.