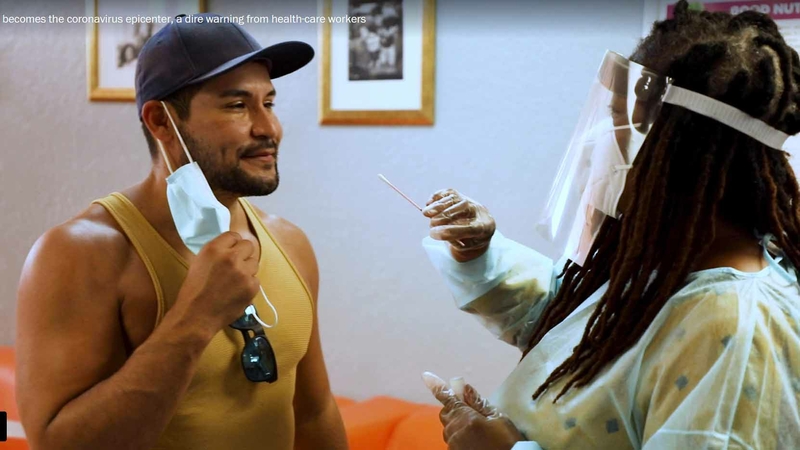 The Independence Day weekend concluded with dire predictions about the surge of coronavirus cases across the country and with national and local officials saying a rush to reopen fueled the spread of the novel coronavirus and outpaced efforts to care for its victims.

"We're right back where we were at the peak of the epidemic during the New York outbreak," former Food and Drug Administration commissioner Scott Gottlieb said on "Face the Nation" on CBS. "The difference now is that we really had one epicenter of spread when New York was going through its hardship, now we really have four major epicenters of spread: Los Angeles, cities in Texas, cities in Florida, and Arizona. And Florida looks to be in the worst shape."

New coronavirus cases in that state on Sunday exceeded 10,000 in a day for the third time in the past week, after the state posted a record of 11,458 the previous day. The new infections pushed the state's total caseload past 200,000, a mark passed by two other states, New York and California.

"It's clear that the growth is exponential at this point," Miami Mayor Francis Suarez, a Republican, said on ABC's "This Week." More than 47,000 of Florida's cases are in Miami-Dade County.

The rolling seven-day average for daily new cases in the United States reached a high for the 27th day in a row, climbing past 48,000 on Sunday, according to The Washington Post's tracking. Coronavirus-related hospitalizations rose to their highest levels to date in Arizona and Nevada.

FDA Commissioner Stephen Hahn was pressed to analyze President Donald Trump's comments Saturday that a vaccine would be ready "long before the end of the year" and that 99% of the cases have been "totally harmless."

Hahn dodged both in appearances on Sunday talk shows.

"If you don't follow local and state guidelines about what to do, if you're not following the CDC and White House task force guidelines, you are putting yourselves and you're putting your loved ones at risk," Hahn said in an appearance on CNN.

He also said it was "too early to tell" whether the Republican National Convention could be held safely in Jacksonville, Fla., next month. "We'll have to see how this unfolds in Florida and elsewhere around the country," Hahn said.

Trump's campaign on Sunday said the president would hold an outdoor rally next Saturday night at Portsmouth International Airport in New Hampshire. "There will be ample access to hand sanitizer and all attendees will be provided a face mask that they are strongly encouraged to wear," the campaign said in announcing the event.

Hahn, on ABC, refused to be pinned down about whether there would be a vaccine by the end of the year, as the president has said there will be.

"I can't predict when a vaccine will be available," he said, adding that the FDA was moving with "unprecedented speed for the development of a vaccine."

But he noted that his department issued guidelines last week about vaccine development because "our solemn promise to the American people is that we will make a decision based upon the data and science on a vaccine with respect to the safety and effectiveness of that vaccine."

Public health experts continued to push back on what they say are misleading claims that the surge in cases is the result of expanded testing capacity alone. "When the virus is under control, testing doesn't uncover more cases," Gottlieb said. "It's a tool for keeping the epidemic at bay."

Frustration about the pandemic response has mounted among local leaders, who say they have had to grapple with conflicting orders and frequently changing guidelines from governors and the White House as they try to curb sharply rising infections.

After Texas reported another single-day record for new coronavirus cases over the weekend, Austin Mayor Steve Adler told CNN's "State of the Union" that there won't be enough medical personnel to keep up with the spike in cases if the rate of increase continues unabated in his city.

"If we don't change this trajectory, then I am within two weeks of having our hospitals overrun," said Adler, a Democrat, adding that intensive care units in the city could be overflowing within 10 days. He said he was not sure that Texas needed a statewide shelter-in-place order, but he said he wanted the authority to impose one locally.

She said she had been stripped of authority to issue stay-home orders after Gov. Greg Abbott, a Republican, decided to move forward with an aggressive reopening plan in the spring. All she could do now was issue "recommendations," which were nowhere near as effective, she said.

Phoenix Mayor Kate Gallego, a Democrat, attributed soaring case numbers in Arizona to the state's decision to resume business as usual before the virus was under control. She noted that young people who ignored health precautions had probably led the explosion in cases.

Gallego said federal officials had dismissed her requests to conduct community-based testing in the area after people reported waiting in line for six hours at some testing sites. "We were told they're moving away from that," she said, "which feels like they are declaring victory while we're still in crisis mode."

The local officials said mixed messages about reopening contributed to a false sense among the public that the crisis had passed. "The city of Miami was the last city in the entire state of Florida to open. I was criticized for waiting so long," Suarez said. "But there's no doubt that the fact that when we reopened, people started socializing as if . . . the virus didn't exist."

The number of deaths and the morbidity rate have not increased with the surge in new cases, in part because the spike in infections has been among younger, more resilient victims. And health officials say they now know more about the disease than they did when deaths were on the rise.

"What we're able to do is when people do get hospitalized and get into the ICU, we're able to save more lives with treatments like remdesivir, with steroids now, which has a big impact on mortality, and innovations in care like using blood thinners on patients and not intubating them as aggressively," Gottlieb said.

Said Hahn: "We are in a fundamentally different place now than we were in March and April."