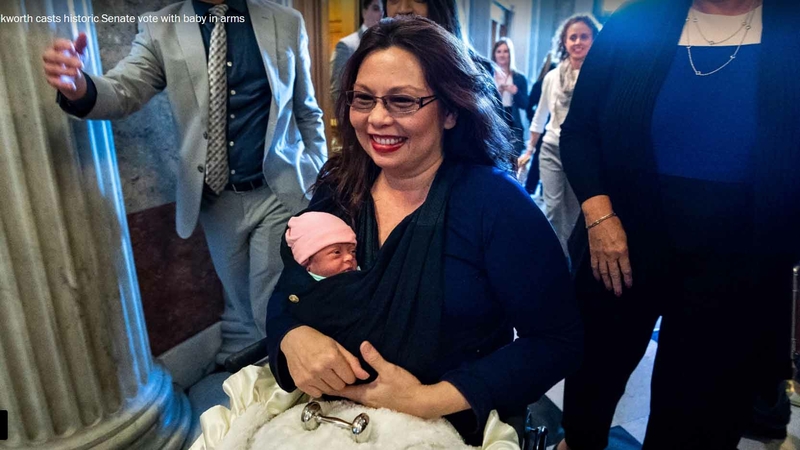 WASHINGTON - As Joe Biden pushes ahead with his search for a running mate, Sen. Tammy Duckworth, D-Ill., has quietly emerged as a serious contender, according to three people with knowledge of the selection process, one of several developing dynamics as the search enters its final weeks.

Duckworth is a Purple Heart recipient and veteran of the Iraq War, the only finalist with military combat experience - and as a woman of Thai and Chinese descent, one of several candidates of color under consideration. While she has a lower profile than some rivals, she is being taken seriously by Biden's team, according to the people with knowledge of the search, one of whom said she has lately received strong consideration.

Former Senate majority leader Harry Reid, who has been in direct contact with the Biden campaign about its search, said in a recent interview that there was a "lot of attention" lately on Duckworth, whom he called "a highly decorated woman."

Reid suggested Duckworth's qualifications are getting more attention. "You had all the other names there, and it was as if she didn't exist," Reid said. "And suddenly people began to look at her - this highly decorated woman, member of Congress, senator."

Two others with knowledge of the search said Duckworth has been attracting notable interest from the campaign, including one who said Duckworth had left a strong impression on at least part of the Biden team. They spoke on the condition of anonymity to discuss private deliberations.

Duckworth's emergence comes as some Biden allies say former senator Chris Dodd, D-Conn., a close friend of Biden's, is taking a primary role in the search process. It is also unfolding as Republicans prepare to launch fierce attacks on whoever is chosen as running mate, believing that person might present an easier target than Biden himself.

As the vetting continues, the people with knowledge of the search say that it remains fluid and that it's far from clear whom Biden will select, with Sen. Kamala Harris, D-Calif., still seen by many Biden allies as a favorite and other prospects very much in the mix. Some Biden allies said privately that while Duckworth is an appealing candidate, they don't think she will ultimately be chosen.

Beyond Duckworth's relative inexperience on the national stage, her selection would frustrate those who are pushing Biden to choose an African American, saying the issues raised by protesters in recent weeks highlight the need for someone who understands the black experience in America.

In an interview Sunday on CNN's State of the Union, Duckworth said black female voters "are a key to the victory for Democrats."

But she added that the Biden campaign has its "own process that they are going through, and I'm sure Vice President Biden will pick the right person to be next to him as he digs this country out of the mess that Donald Trump has put us in."

Duckworth recently moved to block promotions for 1,123 senior members of the military as a way to extract assurances from Defense Secretary Mark Esper that he would not retaliate against an Army officer, Lt. Col. Alexander Vindman, for his role in the impeachment of President Donald Trump.

Biden, who has said his running mate will be a woman, is considering a diverse list of candidates. Those who have received close consideration include Rep. Val Demings, D-Fla., Sen. Elizabeth Warren, D-Mass., former United Nations ambassador Susan Rice and Democratic New Mexico Gov. Michelle Lujan Grisham, according to people with knowledge of the situation, who spoke on the condition of anonymity to describe private talks. Rep. Karen Bass, D-Calif., has also been vetted by the campaign.

While some of the candidates have adopted the traditional posture of not promoting themselves publicly for the job, others, like Rice, have been more open about touting their credentials. With Biden's commitment to choose a woman and the public debate about whether she should be African American, this has been an unusually open search process.

"Joe Biden needs to make the decision as to who he thinks will be his best running mate, and I will do my utmost, drawing on my experience of years in government, years of making the bureaucracy work," Rice said Sunday on NBC's "Meet The Press.

She added: "I've worked on multiple campaigns, presidential campaigns. I've been on the campaign trail as a surrogate and I'm going to do everything I can to help get Joe Biden elected and to help him succeed as president, whether I'm his running mate or I'm a door knocker."

Biden initially said he planned to name his running mate by Aug. 1, but recently suggested that deadline could slip. As the prospects have been scrutinized, Dodd has cemented his position as a central figure in the process, according to the people briefed on the situation.

Dodd, 76, is one of four co-chairs of the selection committee, but "it's obvious that Dodd is the chair of the group," said Reid, who has spoken directly to Dodd.

Some groups have raised concerns about Biden's decision to name Dodd to the selection committee. In the 1980s, Dodd allegedly behaved inappropriately with a waitress at a restaurant in Washington, according to a GQ article that described an alleged encounter involving former senator Edward Kennedy physically forcing himself on a waitress.

Dodd did not respond to a request for comment Sunday.

Republicans are watching the Biden team's actions, with Trump allies preparing to unleash a barrage of attacks on whoever emerges as the running mate, according to people familiar with the plans.

Biden himself has proved largely impervious to Trump's attacks so far, and Trump aides hope the vice presidential nominee - a woman who could be more liberal and less familiar than Biden - will prove more vulnerable to criticism.

The attacks could be bolstered by Biden's age, 77, and the possibility that he would only serve one term, making his running mate something of a president-in-waiting.

"Republicans are more likely than ever to hammer the Democratic vice presidential nominee," said Dan Eberhart, an oil industry executive and Trump donor. "Biden is boxed in by the progressives in the party - he has to pick a woman and someone who is relatively far to the left of himself. That's going to provide natural openings for the campaign to draw contrasts."

America Rising, a conservative organization, has been filing Freedom of Information Act requests to get background on the prospects, according to a person familiar with the group's activities.

Those close to Biden's process say his campaign is anticipating the GOP attacks and factoring them into the search, and they argue that Republican attacks could backfire.

One person with knowledge of the system recently said that more in-depth interviews by Biden and his staff are expected to be arranged and conducted at some point.

Some Democrats do not expect Biden to name his pick until shortly before the Democratic National Convention, which is slated to begin on Aug. 17. That would be a more traditional time to name a selection, and it would avoid giving Trump a target in the intervening weeks.

"My only admonition is: Don't rush into this," Reid said. "Because things change significantly."