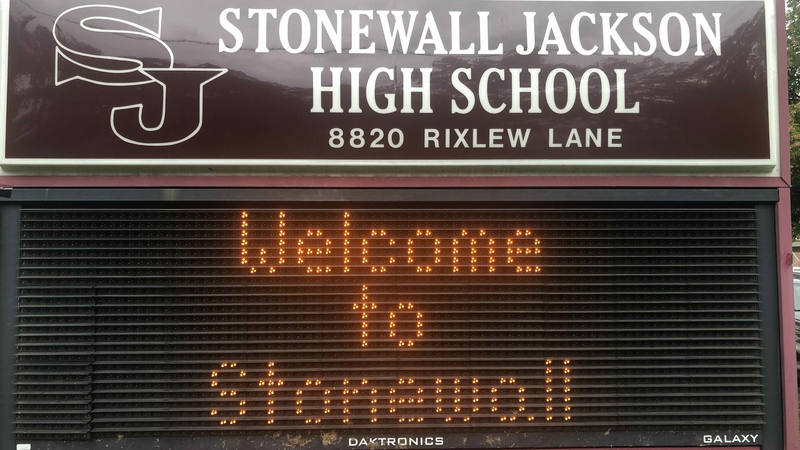 Schools throughout Virginia are shedding Confederate names and mascots as officials face a burst of advocacy from students, alumni and parents fueled by the national reckoning over racism and injustice.

And Fairfax County is searching for a new name for one of its most racially diverse schools, Robert E. Lee High School - long ago informally re-christened "Lee High School" by embarrassed students who hoped peers from other places wouldn't recognize the reference. Options for new titles, put forth by the superintendent in a recent email to families, include Rep. John Lewis, D-Ga., President Barack Obama and civil rights activist Cesar Chavez.

Often, schools' names have fallen after students or alumni started online petitions, which garnered hundreds, and in some cases thousands, of signatures in the days following the police death of George Floyd in Minneapolis police custody. A.J. Jelonek and Deirdre Dillon, white alumni of Loudoun County High School, started just such a petition against the Raiders last month on Juneteenth, the holiday celebrating African Americans' emancipation from slavery. They said the pandemic, combined with the Floyd demonstrations, fueled the perfect opportunity for change: People were angry and stuck at home, and this marked one of the few ways they could speak out.

"I think a lot of people, right now, are looking back and examining things in their life that they let slide or just accepted as 'that's the way things are,' " said Dillon, 29. "That's how it went for me, anyway, and my mind jumped right to the Loudoun County Raiders."

Historians said wholesale rejection of Confederate iconography by Virginia schools is unprecedented, but James Grossman, executive director of the American Historical Association, said "the rejection of the icons by black students, parents and community leaders has a history that goes back to the renaming of the schools and the mascots themselves."

That took place mostly in the 1950s and 1960s, Grossman said, as an angry reaction to the Supreme Court's seminal 1954 decision, Brown v. Board of Education, which mandated the desegregation of public schools nationwide. In response, angry white Southerners launched a program of "massive resistance," which included, in addition to more violent measures, renaming schools and their mascots for Confederates.

An analysis by Education Week found that at least 191 schools in 18 states, almost all in the South, still bear the names of men with links to the Confederacy, though historians said that's an underestimate. The Education Week data suggests that Virginia has the second-highest count of these in the country at 23, trailing only Texas, which has 45.

Adam Domby, assistant professor of history at the College of Charleston and author of "The False Cause," said white people at the time hoped to send a clear message to black families trying to integrate America's school system.

"It was trying to make black students feel unwelcome, while white students and white communities were emboldened to resist desegregation," he said. "And it helped instill a narrative of history that is false and celebrates white supremacy . . . it was teaching white students who is a hero, who is the perfect white gentleman worthy of emulation."

Kimberly Boateng, a 17-year-old black senior at Robert E. Lee High School, said the name never made her feel unwelcome. Her school is majority black, Latino and Asian, with white students making up 16% of the student body in 2018-2019; she has always felt its culture is loving and accepting.

She loved walking the hallways, filled with diverse crowds, colorful in all senses of the word. But she didn't like walking past the gigantic painting of Gen. Robert E. Lee hung just by the school's entrance.

"One day I was sitting after school and the lobby was empty and I looked up and it was kind of menacing," Boateng said. "Then I walked to the plaque underneath it and saw it was donated by the Daughters of the Confederacy. And suddenly I felt, 'This is ridiculous.' "

Boateng and her friend Kadija Ismail, also 17 and a senior, knew some students and alumni had begun pushing to change the name in 2017. They got involved in the effort last year.

After Floyd's death, Ismail, who is also black, decided she was fed up with waiting. She launched an online petition on June 6 that earned more than 1,000 signatures in its first 24 hours. And she and Boateng wrote an open letter the next day to Superintendent Scott Brabrand and the school board.

Robert E. Lee "embodies the very heart of racism," they wrote. "The next graduating class [shouldn't] have the misfortune of having his name immortalized on their diploma and remembered as their alma mater."

Days later, the board voted unanimously to change the name. The girls are far from done, they said: With other young people, they're discussing ways to add more black history to school curriculums and ensure that the school system hires more black teachers and administrators.

"Civil rights didn't end with Martin Luther King," Ismail said. "The fight isn't over, and the fight won't be over for a long time."

Boateng and Ismail said they faced little opposition throughout, from classmates or alumni. That wasn't the case in Loudoun, where Jelonek, 28, and Dillon soon noticed backlash from older graduates on Facebook. Another white graduate, Shawn Carver, started a counterpetition calling the mascot a "generic cowboy-like raider" and urging the school board to "protect the legacy of thousands of students from being destroyed."

He also noted the cost of a mascot switch - school officials had estimated a price of $1 million - and argued that the money could be better spent on boosting online learning during the coronavirus pandemic, or on purchasing textbooks that do a better job of capturing black history in America. His petition garnered nearly 1,000 signatures, and, Carver said, earned the support of students and alumni of all races and ages.

At the heated virtual board meeting on June 29, others gave more sentimental reasons.

"Our children have been stripped of so much this year, between a meaningful education, socialization with their peers and now a possible . . . mascot removal," said Carolyn Williams, parent to a high school senior, a middle-schooler and a kindergartner. "My senior athlete really cares about the Raiders."

But, like in Fairfax County, the vote, which took place about 1 a.m., was unanimous.

In Falls Church, Hayley Loftur-Thun is still awaiting the final outcome of her petition, which takes the battle beyond Confederate generals and calls to rename Thomas Jefferson Elementary School, where she attended first-fourth grades.

Through research this summer, Loftur-Thun, a 22-year-old student at Virginia Commonwealth University, learned that Thomas Jefferson exploited enslaved black boys - between 10 and 16 years old - to staff his profitable nailery at Monticello. She found records in which Jefferson wrote that he oversaw "all the details of [the boys'] business myself."

"I'm not saying let's erase Jefferson," said Loftur-Thun, who is white. "All I'm saying is that it's particularly inappropriate to name an elementary school after a man who enslaved young boys."

She has faced fierce opposition, including a letter to the editor in a local newspaper, often from older white men. But, through phone calls, she has managed to convince some opponents. She got her father, an initially skeptical history buff and Jefferson fan, on board, too.

The Falls Church School Board has taken no definitive action, though at its most recent meeting it discussed hiring a consultant who could provide more historical context. Even if the name never changes, Loftur-Thun said, she will still feel proud she launched the petition. At least she started a conversation.