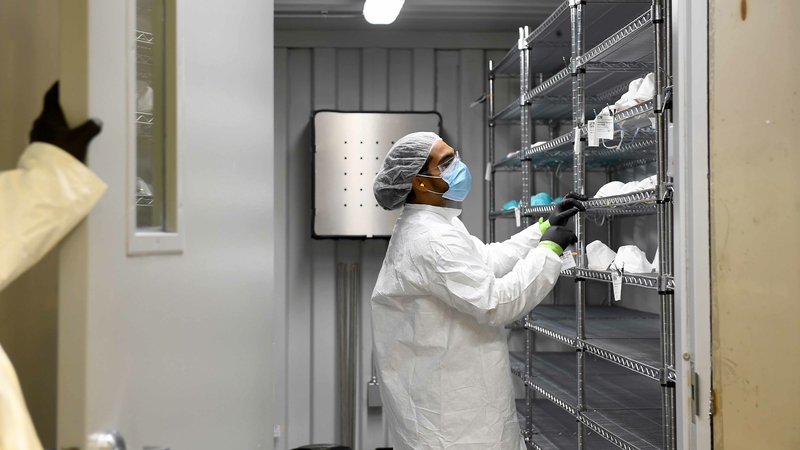 Decontamination Technician Courtney Walton checks on masks that have been in a sealed shipping container at the Battelle Critical Care Decontamination System in the District. MUST CREDIT: Washington Post photo by Katherine Frey.

WASHINGTON - In a warehouse in Washington sits eight large shipping containers - the kind one might expect to see in a shipyard.

Inside are dozens of previously worn N95 respirator masks.

Workers, clad in protective clothing, place masks onto racks inside a container, tossing aside any that are contaminated with bodily fluids or makeup. The masks are sprayed with hydrogen peroxide vapor, then moved into empty shipping containers to be aerated.

The process is part of a government-sponsored program to decontaminate and reuse what is normally single-use personal protective equipment during the novel coronavirus crisis.

The system operated by Battelle Memorial Institute, an Ohio-based nonprofit research corporation, is part of efforts in the D.C. area and across the country to reuse personal protective gear such as masks amid continued shortages of the equipment.

The shortages have persisted largely as a result of supply chain failures, including the availability of materials, said Ingrida Lusis, vice president of policy and government affairs at the American Nurses Association.

On top of that, she said, some hospitals are storing large amounts of personal protective equipment amid concerns about future waves of the coronavirus that causes the disease covid-19. And as hospitals bid against each other to obtain critical materials such as respirators, gowns and gloves, some have lost out.

Meanwhile, PPE decontamination appears to be more commonplace. There are nearly 50 Battelle decontamination facilities nationwide. And in an American Nurses Association study administered in May, 43% of the 14,000 nurses surveyed said their hospitals were decontaminating and reusing N95 respirators.

In addition, 79% of respondents said they were required or encouraged to wear personal protective equipment for longer periods of time or reuse it, according to the study conducted between May 15 and 31. 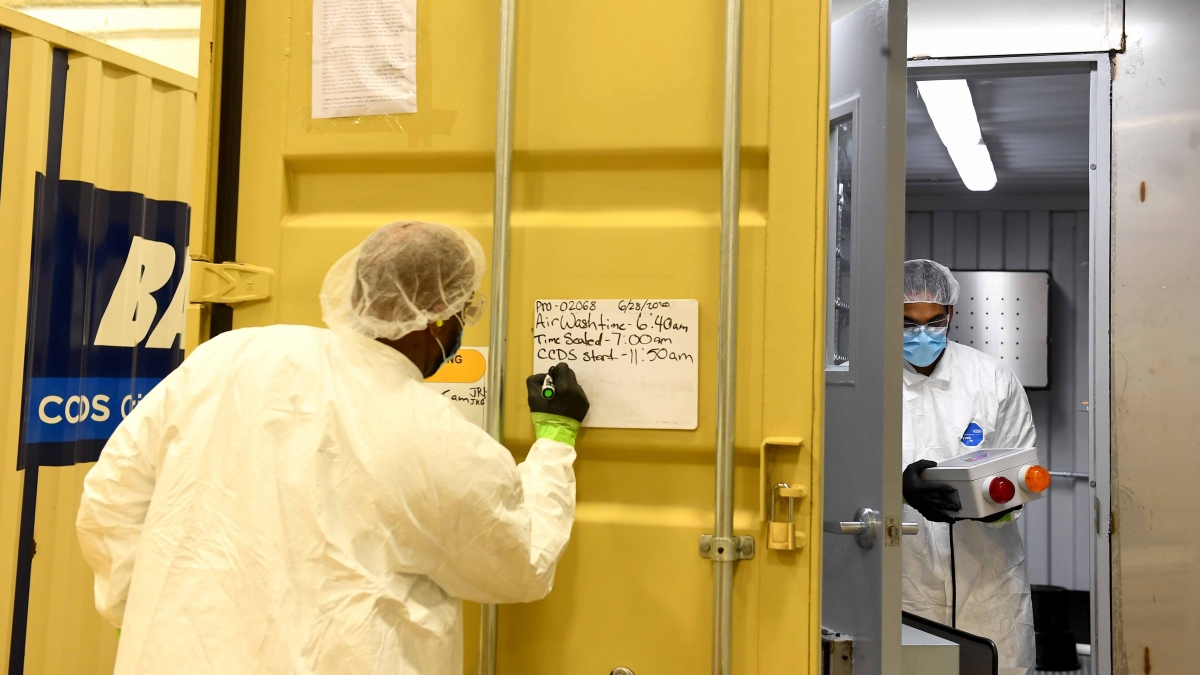 The coronavirus pandemic forced sterilization professionals like Greene-Golden to toss aside old rule books that called for PPE to be discarded after it was used with one patient.

"It changed things for me, because I had to defend a practice that was technically wrong, as far as our standards go," she said.

The International Association of Healthcare Central Service Materiel Management, an organization for sterilization professionals, said it received questions from health-care professionals after federal agencies moved to support the decontamination of PPE.

The Food and Drug Administration has released emergency authorizations allowing for N95 decontamination. The National Personal Protective Technology Laboratory at the Centers for Disease Control and Prevention has tested and signed off on a number of decontamination techniques.

"Our phones rang off the hook and our emails were burning up because people were saying, 'Is this real? Can we do this?' " said Natalie Lind, IAHCSMM's education director.

Concern about the safety of mask decontamination has been mounting among some nurses.

In the May survey conducted by the American Nurses Association, 53% of nurses said the decontamination of N95s made them feel "unsafe."

"The reason why we're learning nurses are feeling unsafe is because there's the risk of what we call off-gassing, and the inhalation of those gases, as they are emitted from the N95 respirator," said Kendra McMillan, senior policy adviser at the American Nurses Association.

Concerns have also arisen among nurses and nurses' unions that respirators may not fit as well or may return degraded after undergoing decontamination.

But Battelle officials say its Critical Care Decontamination System is backed by scientific research. Studies began in 2014 during the Ebola crisis, and the system has evolved into one that has now processed more than a million masks, said Will Richter, principal research scientist at Battelle. The percentage of masks that have yielded a complaint is a fraction of 1%, Richter said.

The masks are aerated after each decontamination until the hydrogen peroxide vapor is 0.8 parts per million, below the Occupational Safety and Health Administration standard of one part per million, Richter said.

"We've seen no outliers," he said. "They all have passed with flying colors."

3M, which manufactures N95 respirators, has been reluctant to embrace strategies to disinfect and reuse its product. But the company recently released its own evaluation stating that Battelle's system could be used safely up to 20 times on 3M N95 respirators.

"However, the number of cycles that a particular respirator will withstand will depend on how many times it has been donned, stored and duration and conditions of use," 3M spokesperson Jennifer Ehrlich wrote in an email.

Some hospitals, though, are opting to decontaminate the masks fewer than 20 times.

Within Kaiser Permanente, the health system's "inventory supply planning is making forecasts based on assumptions that an individual respirator will undergo less than half that number of reprocessing cycles," spokesman Marc Brown wrote in an email.

Some hospitals are returning N95 respirators to their original users after each round of decontamination, partially in an effort to boost the confidence of front-line health-care workers.

"The team was already worried, people were already fearful of covid-19. And the one thing we could do to comfort their fears was to say, 'We're giving you back your mask,' " said Greene-Golden of Adventist HealthCare's Shady Grove Medical Center.

Greene-Golden said it's still uncertain when hospitals like hers will be able to resume disposal of PPE after each patient. Her hospital is hoping to have a 90-day supply of N95 masks on hand before they return to the previous process, she said. Last she checked, there was about 75 days' worth of masks. Things are improving, she said.

Battelle's decontamination system has received attention from the White House.

On March 29, President Donald Trump tweeted, "Hope the FDA can approve Mask Sterilization equipment ASAP. As per Governor @MikeDeWine, there is a company in Ohio, @Battelle, which has equipment that can sterilize masks quickly."

That day, the FDA, which had permitted Battelle to operate the decontamination system at its headquarters in Ohio, authorized the company to bring it to other sites throughout the country.

In addition to concerns about the safety of reusing treated masks, Battelle's system has garnered criticism for its hefty price tag. The company's contract with the federal government has a ceiling of more than $400 million.

The company has charged roughly $78 million so far for the setup of 47 systems nationwide, said Battelle spokesman T.R. Massey.

"The cost of operations won't be known until the program comes to an end," he wrote in an email. "The ceiling is about $400 million, but it's just that, a ceiling. We did not just get a check from the government."

For the time being, decontamination work continues in earnest at the District's Battelle facility on New York Avenue.

Vivian Smith, a principal research scientist for Battelle, recently took over the site after running a CCDS facility in Pennsylvania.

There, she said, she worked alongside volunteers from a wide array of backgrounds, including doctors, National Guard members and military veterans.

"It's been really helpful for us, because they've helped improve the process," she said.

Luis Garcia, a Battelle software engineer who ran the D.C. facility until recently, said he volunteered - even though he had little experience in the field - in an effort to aid those battling covid-19.