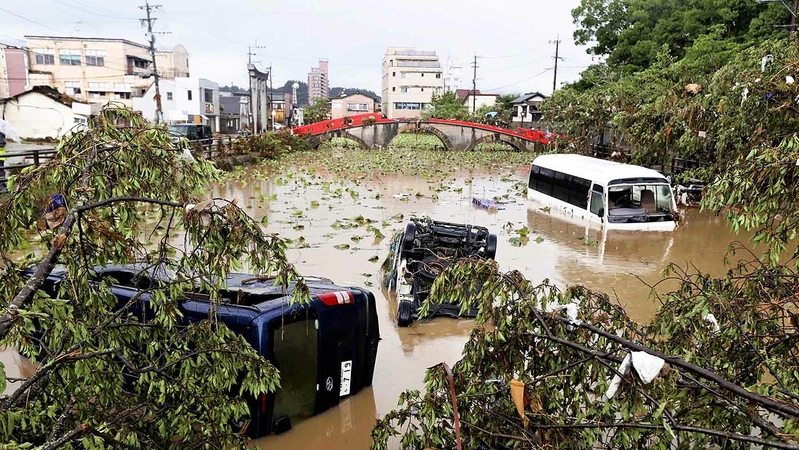 Vehicles are seen washed up in a pond near a shrine in Hitoyoshi, Kumamoto Prefecture, on July 6, 2020. MUST CREDIT: Japan News-Yomiuri

An evacuation notice was issued to about 250,000 people on Monday in Kumamoto, Kagoshima and Miyazaki prefectures, The Yomiuri Shimbun has learned. Already hit by torrential rain due to a stationary rainy season front, the three prefectures saw more heavy precipitation on the day.

The death toll in Kumamoto Prefecture has increased to 44. The search for the missing is continuing, but firefighters have postponed their searches in some areas due to the rain.

There have been reports of rivers overflowing in Miyazaki Prefecture, and the Japan Meteorological Agency is calling for people in rain-hit areas to be on full alert against landslides and other potential disasters.

According to the agency, the hourly rainfall by noon Monday had reached 109.5 millimeters in Kanoya, Kagoshima Prefecture, the heaviest rain on record in the city. There was also a record 88 millimeters of rainfall in an hour in Shibushi in the prefecture.

Radar analysis indicated about 120 millimeters of rainfall near Kushima, Miyazaki Prefecture, in the hour to 7:10 a.m. The agency therefore issued an alert on a record downpour in a short time in the area.

In Kushima, the Honjo River broke its banks and flooded into farmlands. There were no reports of injuries or damage such as flooded houses in the area. Oyodo River in Miyakonojo in the prefecture also rose above the flooding alert level at one point.

In Kanoya, Kagoshima Prefecture, an evacuation notice was issued to some areas because the Kimotsuki River in the city was in danger of breaking its banks. The Kuma River in Kumamoto Prefecture also rose above 10.9 meters, the level at which the local government considers the evacuation of residents because the river could flood after a certain period of time.

In the prefecture, evacuation notices were issued to areas where about 200,000 people live in 11 municipalities. As of 6 a.m. Monday, a total of 1,912 people had evacuated. According to the Health, Labor and Welfare Ministry, more than 7,000 households in nine municipalities, including Yatsushiro and Ashikita, have had their water supply cut off.