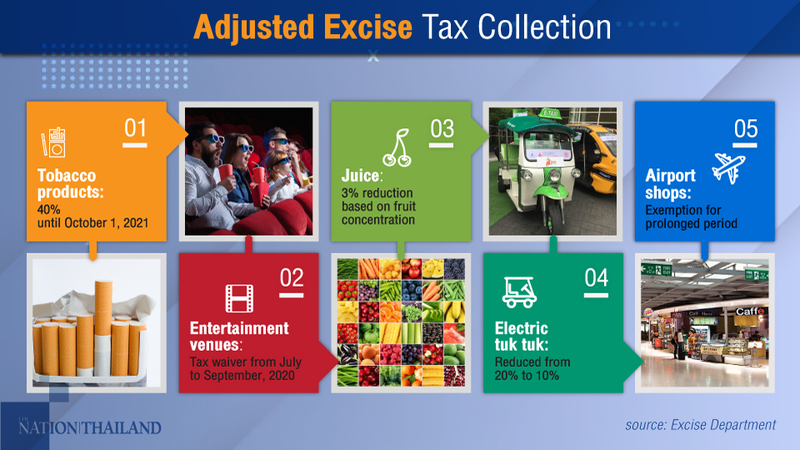 The Excise Department is set to issue nine new regulations to adjust excise collection in five businesses amid the Covid-19 crisis.

Pachara Anantasilp, the department’s director general, said two ministerial regulations and seven of its own announcements will be published in the Royal Gazette this week  before implementation. The main aim of the regulations is to reduce, exempt or expand the collection of excise in five businesses.

“Maintaining the tax at this rate for another year will help tobacco businesses during this crisis,” he said, adding that no tax will be collected from entertainment venues from July to September, though operators are expected to continue employing their staff.

Excise tax on electric tuk tuk will be reduced to 10 per cent from 20 per cent in a move to woo investment.

In addition, the department will expand the period of tax exemption for products sold at airports. Usually no tax is collected from products being sold via airport shops if they remain in the store for 15 days. However, the department decided to extend this period to 30 days and plans to go as far as 120 days if the Covid-19 crisis continues.

Pachara said these adjustments would cost the department at most Bt1 billion, adding that his organization has reduced its collection target this year from Bt64 billion to just Bt6 billion owing to the outbreak.