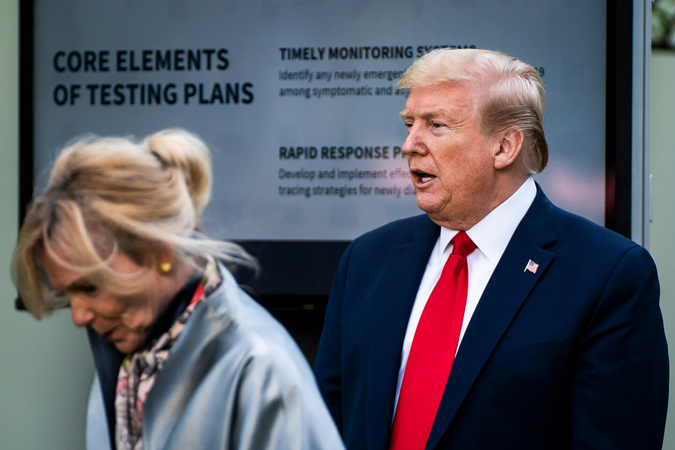 WASHINGTON - President Donald Trump on Tuesday dialed up pressure on state and local authorities to reopen schools, even as coronavirus cases spike, accusing officials who keep them closed as being motivated by politics.

He said in-person education was essential for the well-being of students, parents and the country as a whole, and he vowed to keep up the pressure on governors to open buildings.

"We want to reopen the schools," Trump said. "We don't want people to make political statements or do it for political reasons. They think it's going to be good for them politically, so they keep schools closed. No way."

The president did not mention that his own reelection prospects may depend on whether voters see the country as having recovered from the economic and social devastation of the novel coronavirus pandemic. It's also unclear whether the schools push will be a political winner for Trump. Some parents are eager to return to normal, but many others, fearful of the virus, have told districts that they want to keep their children home this fall.

Virtually every K-12 school in the United States closed this spring in an effort to control infections, abruptly moving to online learning. The system worked reasonably well for some families in some school districts but was an outright failure in others. Colleges and universities also shut down, though their remote learning was generally seen as more successful.

Now schools at all levels are struggling to develop plans for the fall, with many planning a mix of in-person and online classes.

On Tuesday, Trump mentioned Harvard University, which said this week that all students will learn remotely, though 40% of students will be invited to live on campus.

"They ought to be ashamed of themselves, if you want to know the truth," he said. "That's called the easy way out."

During an afternoon dialogue at the White House, federal, state and local officials made the case for in-person schooling, saying it was imperative for the education and social-emotional well-being of children, and critical for parents who need to go to work. They noted that schools provide children with meals, mental health counseling and socialization.

Children, officials added, are far less likely to become ill and die of the virus than older people, though little was said about the teachers and staff members who might be at risk.

"We cannot simply focus on virus containment at the expense of everything else," said Elinore McCance-Katz, assistant secretary for mental health and substance use at HHS.

The confidence projected from the White House stood in contrast with the angst in many local districts working to develop plans for the fall. Most big cities and many others are developing hybrid models that alternate days in the building and days at home to minimize the number of students present at any given time.

Those models are being developed in part to comply with guidance from the Centers for Disease Control and Prevention that recommends "enhanced social distancing" in buildings. For instance, the CDC recommends that desks be placed at least six feet apart, something that might not be possible if all students are on site.

One guest, Patrick Daly, principal of St. Vincent de Paul High School in Petaluma, Calif., said he plans to implement a hybrid system in which students learn from home on some days. Trump replied that he hoped the school could be in-person full time. "I know you want to try," he said.

CDC Director Robert Redfield noted that the agency never recommended that schools close in the first place. And he appeared concerned that his agency's guidance has made districts hesitant to open.

"Nothing would cause me greater sadness" than learning that schools view the guidance as reason not to open, he said.

Schools can safely reopen if they arrange for appropriate social distancing, face coverings and strong personal hygiene including hand-washing, Azar said. He and some other administration officials were seen wearing masks at the White House, a donning the president has resisted.

Making his case for a return to normal, Trump repeatedly played down the rising number of coronavirus cases, saying treatments and vaccines are coming soon. He said there are only more cases because the country is doing more testing, a point health experts dispute.

A statement from two teachers unions and four other school associations said that they, too, want to return to the classroom but that it must be done with safety, not politics, in mind. They also said funding is needed to cover protective equipment and other expenses.

"The White House and the CDC have offered at best conflicting guidance for school reopening, and today offered little additional insight," the groups said.

Many university faculty members have raised questions about whether reopening plans will accelerate the spread of the virus and pose risks to public health. In response, colleges are requiring students to wear face coverings and submit to virus testing.

On Monday, Florida fell in line with the Trump approach, though coronavirus cases in the state are rising. Florida's top school official ordered all schools in the state to reopen buildings for in-person instruction this fall. Hybrid models, as many Florida districts have proposed, are allowed, but schools must offer full-time instruction five days a week for families who want it.

Many rural districts are planning to resume in-person learning for all students, with contingency plans for other models if local cases spike, said Sasha Pudelski, advocacy director for AASA, the superintendents association. But she said many larger districts and those on the coasts are planning hybrid models.

Administration officials highlighted a recent report from the American Academy of Pediatrics, which advised districts to do everything they can to bring students back to classrooms. The academy's president, Sally Goza, was among those invited to the White House on Tuesday.

"Children get much more than an education at school," she said. "Being away from peers, teachers and school services has lasting effects for children. Although this will not be easy, pediatricians strongly advocate that we start with the goal of having students physically present at school this fall."