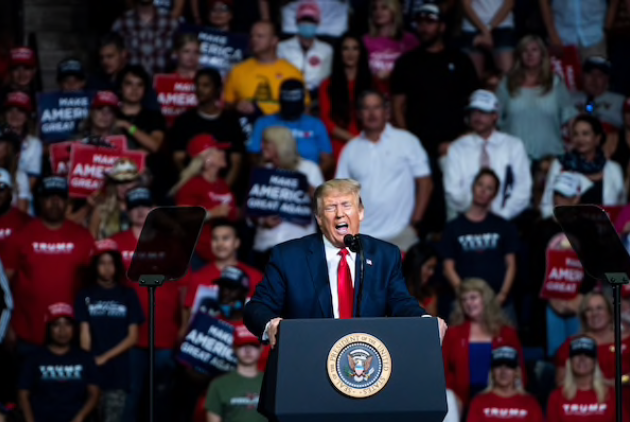 WASHINGTON - The Trump administration has begun the process of withdrawing the United States from the World Health Organization, a move that could hurt the U.N. agency's response to the coronavirus pandemic and reshape public health diplomacy.

The notice of withdrawal, effective July 6, 2021, was sent Monday to United Nations Secretary General António Guterres. Under the terms of a joint resolution passed by Congress in 1948, the United States must give a year's notice and pay its debts to the agency to leave.

Stephane Dujarric, a spokesman for Guterres, said the secretary general was "verifying with the World Health Organization whether all the conditions for such withdrawal are met."

It is not clear whether the president can pull the United States out of the organization and withdraw funding without Congress. When Trump first threatened to withdraw, Democratic lawmakers argued that doing so would be illegal and vowed to push back.

Sen. Robert Menendez of New Jersey, the ranking Democrat on the Senate Foreign Relations Committee, tweeted Tuesday that Congress had received notification of the withdrawal, which he said "leaves Americans sick & America alone."

Rep. James Comer of Tennessee, the ranking Republican of the House Oversight Committee, called the withdrawal "the right decision."

"Until the WHO undergoes some serious reforms, it doesn't deserve our money or our membership," he said in a statement.

Joe Biden, the presumptive Democratic nominee for president, said Tuesday that, if elected, he would immediately rejoin the organization and "restore our leadership on the world stage."

"Americans are safer when America is engaged in strengthening global health," he tweeted.

Trump's push to withdraw in the middle of a pandemic has alarmed health specialists and put the United States at odds with traditional allies.

A group of more than 700 experts on global public health and law on Tuesday called on Congress to push back against the plan, warning that "cutting funding to the WHO during a global pandemic would be a dangerous action for global health and U.S. national interests."

The letter, which was signed by former directors of the Centers for Disease Control, the executive director of the American Public Health Association, the president of the National Academy of Medicine, and university presidents and deans, said a U.S. pullout "will likely cost lives, American and foreign."

The United States helped shape the WHO and U.S. officials still fill key roles there. Pulling American expertise and money will diminish that influence. It could also hurt ongoing health initiatives, particularly in the developing world.

The United States makes mandatory payments to maintain its membership in the WHO in addition to larger voluntary donations. This funding makes up about 15% of the agency's budget.

The mandatory payment, known as the "assessed contribution," may prove difficult for Trump to cut without congressional approval.

At more immediate risk are the "voluntary contributions," money provided to U.S. agencies for health efforts and then given to WHO programs. The largest share of this money goes to polio eradication, with large chunks to fight vaccine-preventable disease, malaria, HIV/AIDS and the provision of basic health care.

The impact may also be felt at home. Without a seat at the table, the United States could be cut out of conversations about the coronavirus response, vaccine development, or the next emerging threat.

One irony is that the administration has in recent months pushed for Taiwan to gain membership or observer status at the WHO for its safety, noted Mara Pillinger, an associate in global health policy and governance at Georgetown University's O'Neill Institute for National and Global Health Law.

"Now, by withdrawing U.S. membership, they are knowingly, deliberately, jeopardizing the health and safety of the American people," she said.

The U.S. plan to cut ties with the WHO is broadly unpopular among America's allies.

"We have a lot of allies on improving WHO, but we have no allies on abandoning WHO," said Jimmy Kolker, a former U.S. ambassador who served as assistant secretary for global affairs at the Department of Health and Human Services until 2017.

The withdrawal letter comes after months of criticism and threats from the U.S. president.

In the early days of the outbreak, Trump praised China and the World Health Organization for their handling of the crisis. But as the coronavirus took hold in the United States and he faced mounting criticism, Trump took aim at the agency's "China-centric" response.

Elements of Trump's critique have resonated beyond the White House. Foreign governments and current WHO advisers have questioned why the WHO amplified false Chinese claims in the early days of the outbreak and repeatedly praised Beijing as the virus spread.

But it is not clear how pulling out of the organization challenges Beijing.

A State Department spokesperson said Tuesday that the process of scaling down engagement with the WHO is already underway but seemed to leave open the possibility of working with the organization in the future.

"The President has been clear that the WHO needs to get its act together," the spokesperson said, speaking on the condition of anonymity in line with department rules. "The United States will continue efforts to reform the WHO and other international organizations to ensure they operate with transparency, fulfill their mandates, and hold governments accountable for their commitments under international law."