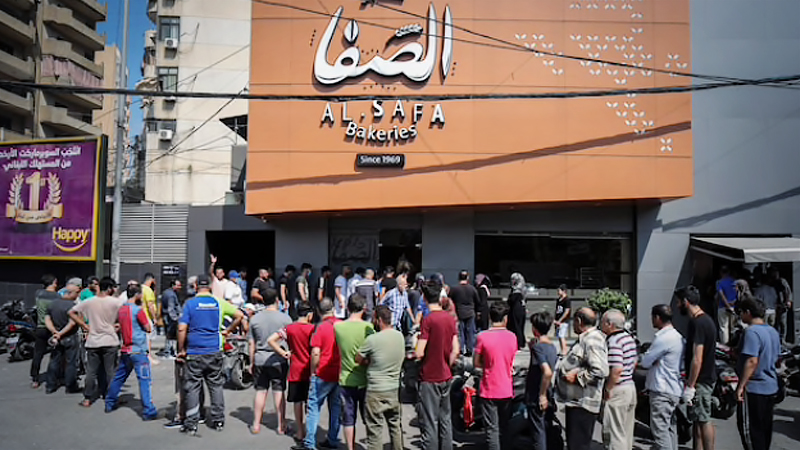 Crowds queue at a local bakery in Beirut on June 27, 2020. MUST CREDIT: Bloomberg photo by Hasan Shaaban

Lebanon's economic crisis is fast slipping out of control, driven by a currency collapse that's decimating businesses and plunging families into destitution.

While politicians and bankers trade blame on the airwaves, the country's pound has lost nearly 60% of its value on the black market in the past month, threatening to suck the economy into a hyperinflation spiral. Food prices are rising so fast that the army took meat off its menus last week. The state-controlled price of a bag of flatbread was raised by a third.

Blackouts are spreading as fuel runs out. Facing ruinous losses, well-known retailers are closing until the currency stabilizes, adding to worsening unemployment that's expected to tip half the population into poverty this year. A spate of suicides over the past week has been linked to the dire economic situation. One man shot himself on a busy Beirut street, leaving a suicide note referencing a famous song about poverty written during the 1975-1990 civil war. A country at the crossroads of the Middle East's flashpoints appears to be coming apart.

The collapse has been gathering pace since protests erupted in October against decades of corruption and mismanagement by political elites who bled state coffers dry. Lebanon defaulted on its foreign debt for the first time in March.

It asked the International Monetary Fund to help overhaul its finances and restore confidence, but talks have stumbled as politicians and bankers bicker over the scale of losses and who should pay. Two finance ministry negotiators resigned over the splits amid IMF calls for the Lebanese to come together and act fast.

Efforts to halt the pound's decline, including with a new pricing platform for exchange bureaus, have yet to bear fruit. One currency changer said that a fearful public was hoarding dollars that and he couldn't see a bottom unless trust was restored.

"We reached the point that we feared most," said opposition lawmaker Sami Gemayel. "Nothing is going to stop the collapse, which is now on all levels."

With Lebanon reliant on imports from coffee to cars, the currency chaos is having a calamitous effect on purchasing power. Prices rose more than 56% in May compared with a year ago, with food costs up about 190%, according to official figures. Those numbers are likely to be much higher in June, when the pound's decline gathered momentum. It skirted 9,500 per dollar on the black market on Thursday, from about 4,000 a month ago, only to slip again over the weekend amid volatility and confusion.

The official peg of 1,507.50 to the dollar remains in place, but is effectively only used for imports of wheat, fuel and medicine. Basic foods are subsidized through an exchange rate of 3,900. Those with dollar deposits can't transfer their money abroad and can only withdraw limited amounts in pounds at a rate of 3,850, forcing savers to pocket the losses.

The minimum wage is 675,000 pounds - worth $450 at the official rate but about $70 at the black market rate that's increasingly used to price consumer goods including clothes, toiletries and cleaning products.

Mohammed Fakhani, manager of one of a chain of minimarkets, closed the meat counter months ago as prices climbed beyond customers' reach. He's stocking cheaper goods that wouldn't have previously sold in brand-conscious Lebanon, and no longer accepts card payments because distributors will only take cash.

"People buy less. They don't ask about brands anymore, they don't go for luxuries, just basics," he said. "There'll be empty shelves if the currency keeps deteriorating this fast as we'll struggle to keep up. Quality and quantity will decline, like the whole country."

Those who can are stockpiling canned food, cooking gas and other essentials in anticipation of shortages. Traffic signals have stopped working, streets are no longer lit at night and roads, already potholed, are falling apart. Lines outside bakeries and evenings by candlelight are conjuring up grim memories of civil war.

On Tuesday, private hospitals said they would limit care to patients undergoing chemotherapy, kidney dialysis and treatments for other life-threatening conditions because of the "critical" financial situation brought on by the foreign exchange volatility and the state's mounting pile of arrears to health-care providers.

Some families are so desperate that Facebook pages have popped up offering personal belongings such as shoes and glassware in exchange for diapers and baby milk.

Lebanese Food Bank, a charity, is trying to fill the void but can scarcely keep up as a package of 14 basic items that once cost 37,500 pounds now costs 105,000.

"Lebanese are proud and used to hide it if they were going through hardships, but we're at the point where some people's fridges are empty and they're asking for help to feed their children," said executive manager Soha Zaiter.

By tying the exchange rate to the dollar for 23 years, Lebanon effectively subsidized imports, allowing its people to enjoy lifestyles otherwise beyond their means. High interest rates paid to depositors attracted diaspora remittances - a crucial source of dollars - but discouraged enterprise because Lebanese could earn more depositing money in the bank.

"The people of #Lebanon are witnessing the largest operation of organized theft and impoverishment in their history by the ruling oligarchs, and within the silence of the international community," economist and activist Jad Chaaban wrote on Twitter.

International lenders, including the IMF, say they're ready to help once Lebanon shows it's serious about ending corruption and restructuring the economy.

For now, the government's banking on expatriates armed with dollars visiting home as the airport reopens following coronavirus closures, but many of them have also lost savings entrusted to Lebanese banks. Instead, those who stayed behind are increasingly looking to leave.

Amin Younes, who inherited a debt-laden coffee shop and that he grew into a brand with 13 outlets over more than two decades, has cut pay and hours. Now, he's seeking opportunities in the Gulf or Europe.

"I'm an optimist by nature. I was always the one who'd say things will be OK but now I can't see the light," he said. "You wake up and everything's shattered, everything you worked for and poured your passion into and you have no control."