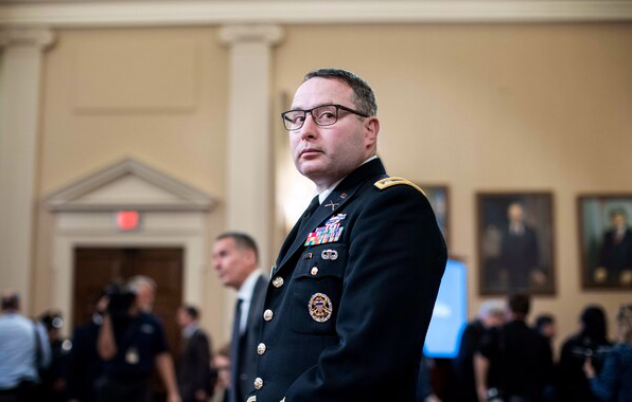 WASHINGTON - An Army officer who played a high-profile role in President Donald Trump's impeachment proceedings is retiring from the military over alleged "bullying" and "retaliation" by the president, his attorney said Wednesday.

Lt. Col. Alexander Vindman, who served as a national security aide at the White House until earlier this year and was up for promotion to colonel, will leave the military instead, his attorney, David Pressman, said in a statement.

"Through a campaign of bullying, intimidation, and retaliation, the president of the United States attempted to force LTC Vindman to choose: Between adhering to the law or pleasing a President. Between honoring his oath or protecting his career. Between protecting his promotion or the promotion of his fellow soldiers," Pressman said. "LTC Vindman's patriotism has cost him his career."

In a message posted on Twitter, Vindman said he had requested retirement from the Army, "an organization I love."

"My family and I look forward to the next chapter of our lives," he said about his decision, which was first reported by CNN.

Vindman, who was the National Security Council's Ukraine expert, testified under subpoena last fall about his concerns surrounding a call between Trump and Ukrainian President Volodymyr Zelensky. In that call, Vindman told House investigators, the president appeared to link military aid to Ukrainian moves to open an investigation into former vice president Joe Biden, the presumptive Democratic nominee for president.

The Washington Post last month reported that government officials have been concerned that the White House would try to prevent the promotion of Vindman, who along with hundreds of other officers had been selected by the Army to be elevated to become a full colonel.

While the White House had not taken any action to strike his name, officials have said that Trump strongly disliked Vindman and might move to block him.

A senior defense official, speaking on the condition of anonymity to discuss personnel decisions, said that Defense Secretary Mark Esper had officially signed off Monday on the list of officers slated to be promoted to colonel, with Vindman's name on it, and that it was expected to be relayed to the White House by the end of the week. The White House would then be responsible for reviewing the list and transmitting it to the Senate for approval.

The official declined to say whether the White House had communicated its intentions surrounding Vindman's potential promotion.

Sen. Jack Reed of Rhode Island, the top Democratic member on the Armed Services Committee, which approves promotions of senior officers, said he had not seen the officer list.

"But we need answers directly from Secretary Esper about what role, if any, the Trump Administration played in this process," Reed, a former Army officer, said in a statement. "Because failing to protect the military promotion process from partisanship sends a terrible signal to all our troops."

Vindman was removed from his position at the White House following the impeachment proceedings, in which Trump was acquitted. On Twitter the president has repeatedly assailed Vindman, who received a Purple Heart for his actions in Iraq.

His fate has presented a potential dilemma for Esper, who recently clashed with the president over the possible use of the military in the government response to civil unrest related to racism and police brutality.

The episode generated a crisis for Pentagon leaders, who scrambled to distance themselves from the president and the perception they were allowing the military to be employed against protesters or used for political ends.

Last week, Sen. Tammy Duckworth, D-Ill., said she would block the promotion of more than 1,000 officers unless Esper ensured that Vindman would not be subjected to retaliation.

On Wednesday, after Vindman's plans to retire became known, Duckworth said she would keep her hold on promotions in place until Esper verified to her in writing that he did not act to stymie Vindman moving up in rank.

If Vindman hadn't retired, he would either have been promoted or, if not promoted, would have been eligible again for potential promotion in a year.

In a statement, Rep. Eliot Engel, D-N.Y., chairman of the House Foreign Affairs Committee, said he believed Trump and his allies would "privately cheer" Vindman's retirement and cited alleged retaliation against the former White House aide.

"That's how the President and his enablers regard public servants - in uniform or otherwise - who uphold their oaths to the constitution, rather than giving into the cult of personal loyalty that has rotted our government from the inside for the last three and a half years," he said.

John Gans, a former Pentagon speechwriter who wrote a book about the National Security Council, said that some military officers who have served at the NSC in past years have been punished by the military for appearing to be too close to the president, a situation he characterized as very different from that of Vindman.

"The 30,000-foot view of Vindman's punishment is desperately worrying: The Army appears willing to lose an officer long seen as a credit to the service by those in and out of uniform," he said.