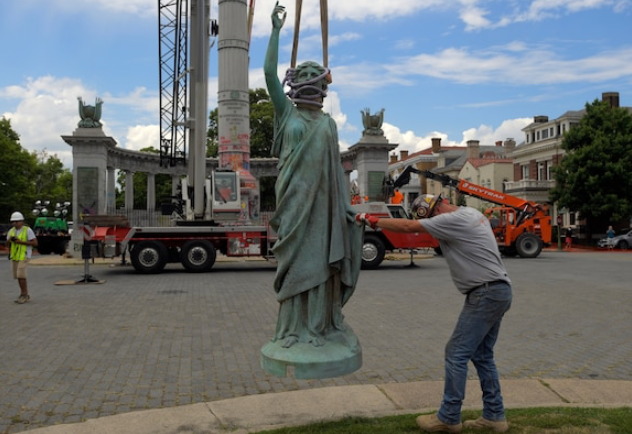 Workers removed the "Vindicatrix" that sat atop the Jefferson Davis Memorial in Richmond on Wednesday. MUST CREDIT: Washington Post photo by John McDonnell

RICHMOND, Va. - Workers used a crane to pluck a bronze female figure known as the South's "Vindicatrix" from the remains of this city's Jefferson Davis monument on Wednesday afternoon, after taking down the Confederate Soldiers and Sailors Monument earlier in the day.

The statues are the latest to be taken down in the former capital of the Confederacy in the week since Richmond Mayor Levar Stoney, a Democrat, ordered the removal of city-owned monuments to the "Lost Cause."

Stoney had work begin July 1, as a new state law took effect giving local authorities control over war memorials on their property. His order, issued without a City Council vote and against the city attorney's advice, came amid a national uproar over police brutality and racial injustice.

Richmond's Confederate tributes, particularly the five towering statues on its famed Monument Avenue, became a focal point for the protests that erupted in late May after the killing of George Floyd in Minneapolis police custody.

Stoney said he had the authority to act without delays mandated under the state law because the city is under a state of emergency, which Gov. Ralph Northam, a Democrat, declared and extended at the mayor's request over the unrest. Stoney said he feared that protesters would get injured or killed if they tried taking the monuments down themselves. He also said the statues might contribute to the spread of the novel coronavirus by attracting large protests.

Protesters took matters into their own hands last month by toppling the statue of Davis, but they could not tackle the Vindicatrix, perched high atop a granite column.

On July 1, Stoney's crews started with the statue of Stonewall Jackson, which was taken down during a thunderstorm. Former Confederate Naval commander Matthew Fontaine Maury was dismantled the next day. J.E.B. Stuart fell Tuesday.

That has left just one iconic monument standing on the avenue, a bronze equestrian statue of Robert E. Lee owned by the state. Northam has ordered its removal, but work has been delayed by a court challenge.

With the biggest city-owned monuments down, work crews carried on Wednesday with the lower-profile Confederate Soldiers and Sailors Monument, which was unveiled in 1894 in the city's Libby Hill neighborhood.

Then it was back to Monument Avenue, where workers in a cherry picker used drills and hammers to loosen the female figure, who stood with her right arm pointing to the sky.

In literature created for the statue's dedication, she was described as "the emblem of Southern womanhood . . . the immortal spirit of her land, shining unquenched within her eyes, and her hand uplifted in an eternal appeal to the God of justice and truth," according to virginiaplaces.org, a historical attractions website.

She was also known as "Miss Confederacy," according to a 2017 Richmond Magazine article on her creation.

Hooked to the crane as dozens of people looked on, she looked like Mary Poppins as she made her sweeping descent, arm extended as if holding an umbrella. A worker in a hard hat with a cigar in his mouth steadied her landing onto the grassy median and then helped load her onto a flatbed truck, with a couple of old tires underneath to cushion her ride to storage.