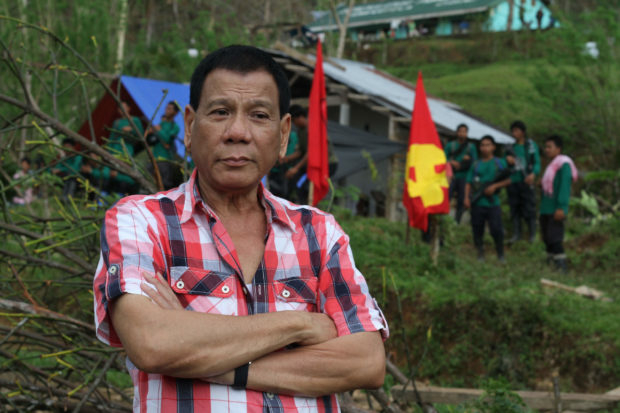 BACK IN THE DAY President Rodrigo Duterte, known for his close ties to communist rebels back in the day in Mindanao, is shown in this December 2012 photo when he was Davao City vice mayor posing near a group of insurgents somewhere in Compostela Valley province. Now as President, he says the rebels are terrorists and targets of his new terror law. (File photo KARLOS MANLUPIG / Inquirer Mindanao)

MANILA, Philippines — As legal challenges to the Anti-Terrorism Act mounted, President Rodrigo Duterte defended the controversial measure on Wednesday, saying it was not meant for law-abiding citizens but for communist rebels and terror groups responsible for bombings, mostly in Mindanao.

He said communist rebels, who have been fighting the government for over 50 years and engaged in on-and-off talks, “think that they are a different breed.”

“They would like to be treated with another set of law, when, as a matter of fact, they are terrorists,” he said.

Duterte said communist rebels were terrorists “because we — I, finally declared them to be one.”

“Why? Because I spent most of my days as a President trying to figure out and connect with them on how we can arrive at a peaceful solution (to the rebellion),” he said, expressing exasperation over the decadeslong communist insurgency.

Duterte initiated peace negotiations with the communist rebels even before officially taking his oath as President and later ordered ceasefires and released key political prisoners to participate in peace talks in Norway.

But the talks fell apart following clashes between state forces and the communist-led New People’s Army.

Angered by the killing of soldiers, the President canceled the talks.

He said the Anti-Terrorism Act was one of “the much-needed legal weapons that we need to fight terrorism.”

He said the terrorists were also those who set off explosives, citing the bomb blasts that killed more than 20 people and wounded over 100 others at the Jolo Cathedral in January last year.

The military blamed the Abu Sayyaf and other groups allied with the Islamic State for the bombings in Mindanao.

Duterte said the law would not be used against those who were not planning to bring down the government or bomb public utilities.

“And for the law-abiding citizen of this country, I am addressing you with all sincerity: Do not be afraid if you’re not terrorists,” he said.

But one opponent of the law said it was the ordinary citizen who was in danger because the law as crafted already was unconstitutional to begin with.

He said the Supreme Court had ruled that a law challenged for imposing prior restraint on the freedom of expression was presumed unconstitutional.

Lagman said he and three other groups that challenged the law in the high tribunal “have protested that among the unconstitutional provisions of the ‘Anti-Terrorism Act of 2020’ is its criminalization of ‘threat,’ ‘proposal,’ and ‘inciting’ to commit terrorism, because it has chilling effects deterring the exercise of free speech and the right to dissent.”

They were joined on Wednesday by two members of the Constitutional Commission that framed the 1987 Constitution.

Another petitioner, former government corporate counsel Philip Jurado, was the sixth petitioner against Republic Act No. 11479 as of Wednesday.

On Tuesday, the Supreme Court consolidated the four petitions filed the day before and ordered the government to reply to them within 10 days.

Monsod and Arroyo asked the Supreme Court to strike down the new anti-terrorism law before it takes effect, saying it “imperils the constitutional rights of our citizens.”

“Its provisions are a lure to abuse and misuse, a magnet to power-wielding and vindictive government officials as well as to lackeys who have no other intent but to please the powers-to-be,” they said in their petition.

The definition of terrorism in Section 4, they warned, was “broad enough to cover legitimate acts and exercise of activities in pursuance of constitutionally protected rights to free speech, expression and assembly.”

They said Section 25 violated the constitutional right to due process of law by allowing the Anti-Terrorism Council (ATC) composed of Cabinet officials to designate individuals and groups as terrorists.

Section 29, which allows the ATC to order arrest and detention of suspects for up to 24 days, violates the right to be protected against warrantless or unreasonable arrests and the constitutional limitations on detention, they said.

The law has no mechanism that provides judicial scrutiny of the ATC’s designation process, they noted.

“It is similar to the administration’s compilation of drug lists, which provide no process for those included to take their names off,” they said.

Had the charges filed against Vice President Leni Robredo and 35 others last year been for terrorism instead of sedition, they all would have been arrested and detained for up to 24 days on mere suspicion and without charges while the Anti-Money Laundering Council would have frozen their assets, they said.

Jurado, whom the President fired in 2018, also attacked Section 29, saying the provision allowed the ATC to waive the application of Article 125 of the Revised Penal Code, which punishes delay in bringing detained persons before a judge within 12 to 36 hours.

“Such waiver is vested solely in the hands of the detainee—the person to whom the right, which is to be waived, is actually vested,” he said in his petition.

Aside from Lagman, the first petitions were filed by a group of lawyers and civic activists led by lawyer Howard Calleja; Far Eastern University law professors; and the Makabayan party-list bloc.

Sen. Ronald dela Rosa, a former national police chief, on Wednesday recalled in an interview with ABS-CBN News Channel that he had nabbed suspected accomplices of terror suspects based on intelligence reports, but could not immediately find evidence and was forced to release them because there was no law allowing authorities to hold them longer than the time legally prescribed.

Later, he saw a video that showed the suspects had joined the Islamic State in Syria and were involved in beheading captives.

It takes time to develop cases against terror suspects as intelligence reports are not enough to file cases and this is where the antiterror law would help, he said.

Reacting to the senator’s statement, human rights lawyer Edre Olalia said Dela Rosa was making a “puerile excuse camouflaging incompetence and a penchant for trampling rights by dressing them up with legal guarantees for impunity using demagogic persuasion.”

“Why did they not build up their case in the interval between their release and the beheading video? Would they have extracted forced, even tortured confessions and information if they were kept in jail longer?” Olalia said.

“You arrest, detain, prosecute and convict someone on the basis of what you have and not on the basis of what the future holds or on evidence that might crop up later. That is not only speculative, guesswork or gambling with luck but illegal and fraught with danger, mistake, and abuse,” he said.

—With reports from Melvin Gascon and Dona Z. Pazzibugan