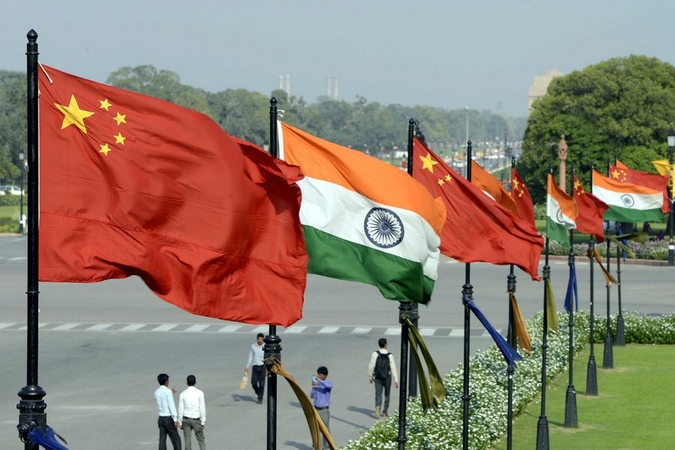 Indian and Chinese national flags flutter side by side at the Raisina hills in New Delhi, India, in this file photo. [Photo/Xinhua]

India was completely responsible for the clash last month on the Sino-Indian border as its forces crossed the Line of Actual Control and built illegal structures on the Chinese side, according to images released by China Central Television.

CCTV broadcast a number of satellite images of some parts of the Galwan Valley during its prime-time news program Focus Today on Monday. The images showed several Indian structures on the Chinese side such as a helipad and bridges, as well as Indian troops who were apparently building such structures.

Some Indian military personnel in uniform can be seen preparing tents and transporting construction materials across the Line of Actual Control.

According to the program, Indian troops have made repeated attempts since April to unilaterally cross the border and enter the Chinese side to cause trouble. On May 6, the Indian side started building barriers and fortifications, trying to unilaterally alter the control situation in the border region.

A few weeks after the confrontation between the border forces of the two sides, the first round of group army commander-level talks between the two militaries was held on June 6. The two sides reached a consensus at the meeting, with the Indian side promising not to patrol and build facilities across the mouth of the Galwan Valley.

However, on June 15, the Indian side went back on its word, violating the consensus and sending troops to illegally cross the control line. The Indian officers and soldiers even attacked Chinese troops coming to negotiate on the matter, sparking fierce physical conflicts and causing casualties, the program said.

Ruan Zongze, executive vice-president of the China Institute of International Studies, said on the program that the moves by the Indian side were provocations and were illegal.

Historically speaking, there have been no disputes over China's sovereign rights in the Galwan Valley area and the nation's control over the region, according to Ruan.

India started the recent clash because of its misjudgment of the current situation and its "great-power mentality", the researcher said.

"Such moves would do harm to India itself," he said.

Su Xiaohui, a senior researcher of international strategies at the institute, said it was the Indian military that started the provocations, the illegal crossing and the physical confrontations.

"We will pay attention to a long-term goal of India that aims to use various means to infringe on other nations' interests and rights," she said.