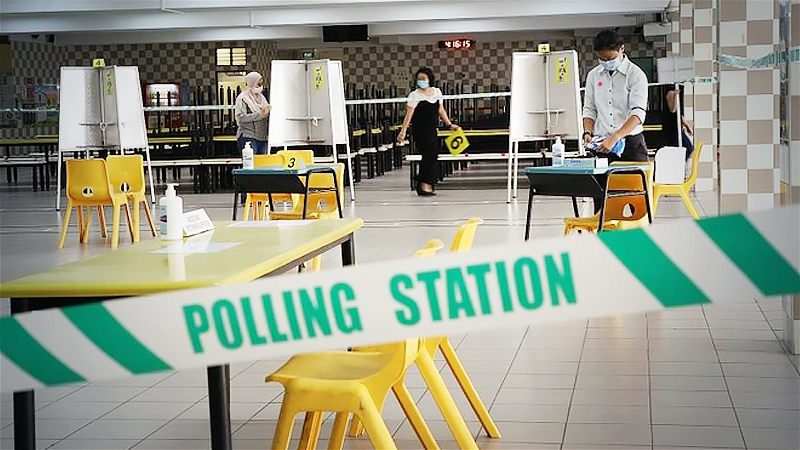 Voters heading to the 1,100 polling stations advised to comply with safety instructions.

Hand sanitisers and disposable gloves are in place at every polling station as more than 2.65 million voters head to the ballot box today to round off Singapore's remarkable Covid-19 election campaign by picking the 93 members of Singapore's 14th Parliament.

Yesterday's Cooling-off Day was one of reflection for voters, after nine days of occasionally fractious campaigning by various parties, both online and on the ground.

While candidates caught a break during the 24-hour no-campaigning period, public servants were busy putting in place the safedistanced polling booths, equipping school canteens and void decks with temperature-taking points, sanitising products and the now-familiar floor markings for spaced queues.

The number of polling stations has been bumped up from 880 to 1,100 for this election, to minimise crowding and exposure to others who may be unwell.

Some candidates, such as Minister for Culture, Community and Youth Grace Fu used the break to have lunch and durian with party activists and volunteers.

Progress Singapore Party's (PSP) Marymount SMC candidate Ang Yong Guan caught up with his staff and reading at his clinic.

Seven political parties made their final pitches to voters yesterday in party political broadcasts, largely sticking with the messages they had delivered over the previous nine days of campaigning.

Prime Minister Lee Hsien Loong said the People's Action Party (PAP) has the concrete ideas and practical plans to deal with the immediate crisis caused by Covid-19, and sought a strong mandate to save jobs in the near term and restructure the economy going forward.

"We do not know how the next few years will unfold, but we give ourselves the best chance of success if we rally together, choose a competent, experienced and committed team to lead the country and give it our full support," he said.

Opposition parties asked Singaporeans to elect more opposition members into Parliament so that the ruling party would not have carte blanche to enact policy.

Workers' Party chairman Sylvia Lim said: "Imagine a Singapore where the huge power imbalance that now exists with the government dominating and controlling the people is changed - and power shifts back towards our citizens."

PSP leader Tan Cheng Bock said its candidates will hold the PAP to account if elected, and to ensure the country is not "blindsided when we make important decisions together".

Meanwhile, overseas Singaporeans residing near the 10 designated overseas polling stations were among the first to cast their votes, starting with those in Dubai at noon yesterday, followed shortly by those in London.

Meanwhile, voting starts at 8am in Singapore and ends at 8pm.

The ELD has advised those voting today to check the crowd situation at VoteQ.gowhere.gov.sg and asks that they show up at their designated polling stations during the allotted two-hour time slot.

However, seniors who are assigned voting time bands in the morning on Polling Day can vote at other times if they are unable to stick to their allocated time slots.

Voters should also take their temperatures before going to vote. There will be temperature screening at the entrance of polling centres and anyone with a temperature of 37.5 deg C or higher will be turned away. Those on Stay-Home Notice or those who are unwell will be allowed to vote only between 7pm and 8pm.

Safe distancing measures will also have to be complied with at polling stations, and voters will have to sanitise their hands and put on disposable gloves before they can receive their ballot papers.

The tallying of votes is done immediately after the close of polls at 8pm. The results of GE2020 are likely to be finalised earlier than in past elections, as mechanical counting machines will be deployed this time to speed up the counting process, although the first round of counting will still be manual.

"Counting machines will also be sanitised with disinfectant wipes," the ELD said.