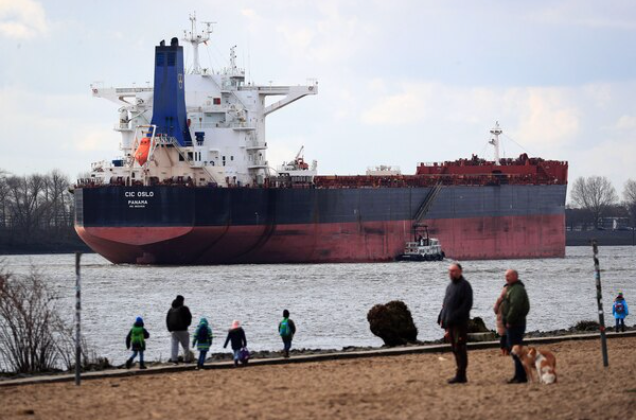 More than a dozen countries with crucial global shipping hubs agreed to ease port and border restrictions for seafarers to help the more than 200,000 workers still stranded on vessels return home.

Nations including the U.S., Singapore, Greece and the United Arab Emirates said they would ease coronavirus-related restrictions for seafarers and boost commercial flights to help facilitate crew swaps. The pact comes after months of pressure on governments, ports and shippers to find ways to get workers off vessels after a rash of suicides and an uptick in expired contracts.

Seafarers will now get international recognition as "key workers" to enable freer movement and quicker repatriation, following a virtual International Maritime Summit hosted by the U.K. Thursday. Some crews have spent more than a year at sea, exceeding limits under maritime agreements, as border restrictions to halt the spread of Covid-19 and canceled flights limited travel.

"It is time to act for seafarers," said Kitack Lim, secretary-general of the International Maritime Organization. "Safe ship operations and crew well-being should not be compromised. The humanitarian crisis seafarers face has implications for all of us, for the world economy and for the safety of life at sea and the environment."

While cruise companies have been able to get most seafarers home by pooling thousands of workers and chartering flights, or in some cases taking them home on luxury liners empty of passengers, the majority of crews on merchant vessels have been stranded.

Another 200,000 seafarers haven't been able to get back onto ships because of travel restrictions to relieve crew who have finished their contracts.

"What we need is for every country around the world to acknowledge seafarers and allow them to get home," said Chirag Bahri, director of regions at International Seafarers' Welfare and Assistance Network. "They're not robots. They need to get home."

While a growing number of ports are now allowing crew changes, management companies say the restrictions have made it difficult to relieve substantial numbers. Ship managing firm Wallem Group says the company has only been able to execute about 20% of their usual crew changes, according to CEO Frank Coles. About 40% of their 4,000 seafarers on vessels have completed their contracts and 10% have been at sea for more than a year.

In the Philippines, the government on Friday designated Subic Bay north of Manila Bay as a hub for international crew change. The Philippines is among the top countries supplying workers in the shipping industry.