Dana Faulkner, who is concerned about her mother's approach to social distancing, poses with a masked statue in Chevy Chase, Md., on June 24, 2020. MUST CREDIT: Washington Post photo by Bill O'Leary

When the pandemic began, Darcy Scott worried most about her parents, who are in their 80s and among the most vulnerable to the coronavirus. To keep them safe, her brother drove them 27 hours from Kerrville, Texas, to Churchton, Md., where Scott and her husband were hunkered down. 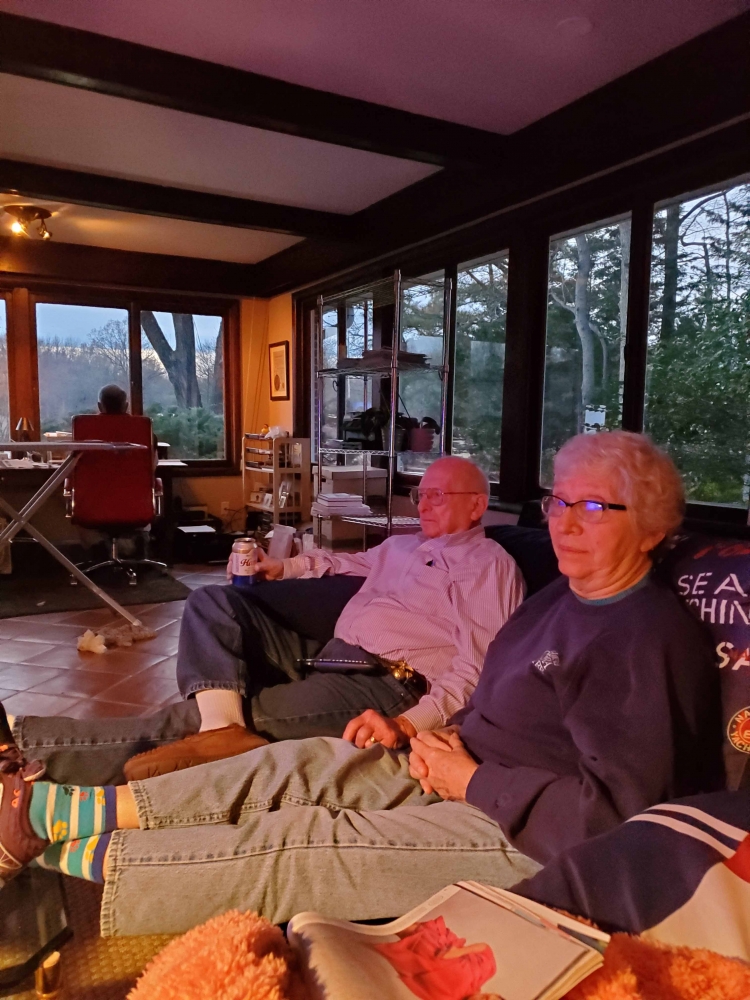 But after a couple of months, Texas started to open up and her parents wanted to go home. Scott's brother drove them back, and since then, she has watched with growing dread as her parents have resumed many of their regular activities even as the infection rates there have climbed.

"Mom went back to the gym, to aqua aerobics. Dad went out to pick up the recycling around town," Scott said. "So there you go, we expended 11 weeks of our lives, and now our parents are wading around in a cesspool of germs."

The effects of covid-19 are most devastating for older people, with a 30% death rate among people over 85 in the United States who develop it. Many in that age group are sheltering in place and skipping social events in an effort to avoid the virus that causes the disease, and younger family members have often stayed away or gotten coronavirus tests before seeing them, to protect them.

But others have taken a more relaxed attitude, engaging in behavior that fills their middle-aged children with terror, for both their parents' health and their own.

Various factors are contributing to this generational divide. Older people in the United States are statistically more likely than younger generations to listen to conservative media and to politicians who have played down the dangers of the virus, and some may have followed their lead. Others may be well aware of the risks but have weighed them against the mental and physical benefits of maintaining exercise and social routines.

Whatever the reasons, the dynamic can leave middle-aged people, many of whom may already be worried about their adult children going to protests or beach gatherings, feeling that they must also parent their parents.

"They were thinking about coming up north for the summer, and they told me they were going to fly, and I told them I thought that was a bad idea," said New York City resident Karyn Grossman Gershon, 58, whose 88- and 85-year-old parents were in Florida when the country shut down. They ended up driving to the New York area.

"I then heard that my mother has been getting her hair done, and that made me crazy. She said, 'The [hairstylist] is healthy, and I'm healthy, and all the people he's seeing are healthy.' "

That didn't reassure Gershon, who along with her partner has strictly limited social contacts and trips to the grocery store.

Scott, in Maryland, worries her parents don't see themselves as vulnerable.

"They don't believe the virus doesn't exist, they just don't believe it will happen to them," she said. "It's that sense of invincibility that I think people who make it into their 80s get - 'I've made it this far when people around me have dropped like flies.' "

Her father, W.J. Scott, 80, said he appreciates his daughter's concern but thinks she's being "a little bit of a mother hen.

"Let's face it, I'm 80 years old and I don't have a whole lot to lose in the end anyway. It's just at what level you're willing to take your edge. I'm a Marine. I was in Vietnam, people shot at me, so this isn't that much more dangerous than that, I don't think."

Even when older people do understand the risks, it may not terrify them as much, said Laura Carstensen, director of the Stanford Center on Longevity. "Older people in general experience less stress in everyday life," she said, adding that surveys show that older people are doing just as well now as in pre-coronavirus times.

"They absolutely see themselves at risk, [but] there is lots of evidence that as people come to the end of their life, they come to live in the present and they stop worrying about the what-ifs," she said.

Bill Thomas, a geriatrician and founder of ChangingAging.org, agreed, saying he has seen many examples of this kind of intergenerational conflict over covid-19 precautions and thinks it's not so much because older people feel invincible but rather the opposite.

"As we get older, we are more likely to lose the illusion of immortality compared to younger people," he said. "Older people are more likely to be living with the awareness that they are in fact mortal and they have a limited amount of time left. Many older people are more conscious of weighing the risk-benefit based on the knowledge that they're not going to be around much longer. So you make some different calculations than younger people."

People in their 50s and 60s tend to still be invested in maximizing their life span, Thomas said. "The 80-plus, they're the real lions of the human race. They've seen more, done more, and a lot of times may be more realistic about their end-of-life prospects."

JoAnn Schaffer, 89, of Shaker Heights, Ohio, dons masks when she goes out and avoids in-person shopping, but she recently had her hairdresser come to her house and hosted a bridge party on her patio - much to her 62-year-old daughter's chagrin.

"I have a different perspective," she said. "I'm old, and if I die, I die. If it's going to kill someone, let it happen to the older people. I've lived my life."

Her hairdresser wore a mask, and they opened the windows. As for the bridge players, "we took our masks off. There was a beautiful breeze. These are people I've known for 30 years, and they're clean."

Her daughter, Ann Schaffer Shirreffs of Cleveland, said she knows she can't tell her mother what to do: "At this point, she's almost 90 years old, and if she wants to get together with three other ladies and sit less than six feet from each other and handle the cards, what can I say? There's nothing I can say." Still, she said, "I lose sleep over it."

Thomas cautioned against young people trying to change older parents' activities: "It's a really ageist presumption on the part of these 60-year-old children that they get to tell their parents what to do. They get to do whatever they want. My message to the 60-year-olds is: Get over it. Let them live their life. Part of being an adult or a grown-up is you have the right to do stupid things . . . but that person has to accept the consequences - young people aren't going to want to be around you."

But Sepideh Sedghi, 51, of Beverly Hills, Calif., can't avoid her parents - she lives with them in a condominium building - and she has underlying health concerns of her own.

"I think they were more paranoid in the beginning and now have become more lax," she said. "There's been this desire to maybe play backgammon or cards with one of our neighbors. My mom has been saying, why don't we go somewhere for Fourth of July? And I've had to explain that even though much of the country is opening up, they're older. . . . So every day is an explanation of how and why and why not.

"My dad has this attitude of he survived World War II, cholera, typhus epidemic, the Islamic revolution, and he's not going to be taken down by corona," she added.

In some cases, adult children have come to a kind of peace with their parents' relative lack of concern.

Dana Faulkner of Chevy Chase, Md., realizes that, thanks to the pandemic, she may not see her mother again. Her mother, whom Faulkner describes as "an outdoors person," is 92 and in an assisted-living facility in Connecticut. Faulkner recently returned from a trip there during which she was able to visit her mother, Jane Daych, by waving up to her third-floor window.

The facility was barring visitors and prohibiting outings off-site aside from essential medical appointments, but her mother "instantly takes the mask off whenever she can, though the aide tries to get her to wear it." She also walks through common areas of her building to go out for daily walks on the grounds, a level of risk some in the facility aren't taking.

Faulkner has a background in public health and knows that if her mother developed covid-19, there would be a good chance she would not survive: "At her age and as a diabetic, her risk factors are off the charts in a facility where there have been confirmed cases of the virus."

But the last time they saw each other before Faulkner returned to Maryland, her mother insisted on a hug.

Faulkner hesitated, then hugged her mother.

"Afterward, I was like, 'Oh, my God, this was really a transgression,' " she said.

Then she thought about it some more. If this was going to be her mother's last summer on earth, maybe the most important thing to her was to get out and breathe the fresh air.

"I would say her impulse to be outside and to enjoy the world while she has it is instinctive rather than analytical," she said. "There isn't a big fear factor going on - she seems to be pretty calm about the whole thing. . . . She said she had a dream in which the Lord was holding the door open for her, saying, 'Jane, I'm here, the door's open whenever you're ready.' "

Is Faulkner glad they hugged?