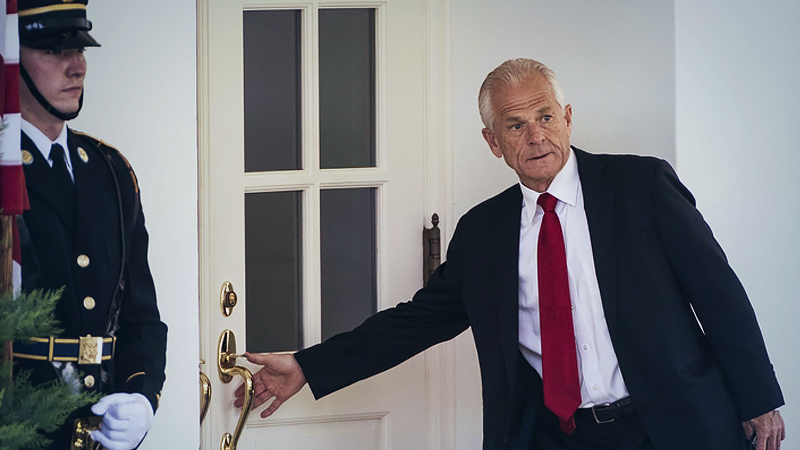 WASHINGTON - White House trade adviser Peter Navarro is leading a Trump administration effort to demand the Food and Drug Administration reverse course and grant a second emergency authorization for the antimalarial drug hydroxychloroquine to treat covid-19, the disease caused by the coronavirus.

Navarro, armed with a controversial new study that he says shows the drug's effectiveness, is being cheered on by President Donald Trump, who has long touted the drug as a "game changer" and even used himself as a possible preventive measure. Trump praised the study on Twitter earlier this week, urging the FDA to "Act Now." The campaign also has been promoted by Rudolph W. Giuliani, the president's lawyer, and Laura Ingraham's show on Fox News.

But Navarro, an economist known more for his aggressive approach to trade issues and China policy than for his medical credentials, faces serious challenges as he denounces what he calls "media-induced hydroxy hysteria." Scientists have widely criticized the new study, by Detroit's Henry Ford Health System, as flawed. In addition, just weeks ago the FDA revoked its emergency authorization for hydroxychloroquine after major studies found the medication wasn't effective for covid-19. And the unexpected revival of a politically fraught issue comes as FDA Commissioner Stephen Hahn tries to shake off criticism he sometimes seems overly deferential to Trump.

"A reversal [on hydroxychloroquine] would be widely seen as bending to the political will of the White House and the hit to Dr. Hahn's credibility would be profound," said Steven Joffe, a medical ethicist at the University of Pennsylvania.

The FDA's response to this pressure will be closely watched, not only because the White House has already been criticized for pushing to influence the CDC's guidelines for the pandemic, but also because the agency will take the lead in approving a vaccine for the coronavirus, a decision that could potentially affect millions. Health experts say it is important for the agency, which was criticized for its initial decision to okay hydroxychloroquine in March, to guard its credibility as it prepares to make these landmark decisions for a public sometimes skeptical of vaccines.

The tug-of-war on hydroxychloroquine also is seen by many as a test for the FDA's Hahn. While sympathetic about his difficult position, some health experts say he appears too willing at times to placate Trump. Just last Sunday, Hahn declined repeated opportunities on two different television shows to dispute Trump's statement that 99 percent of covid-19cases are harmless. On CNN, he said he didn't want to "get into who is right and who is wrong."

Hahn did not want to get into a distracting debate about the president's statement, according to an administration official who spoke on the condition of anonymity to discuss internal deliberations.

Navarro says his goal is simple: At a time when the virus is surging in many parts of the country, there are 60 million millions of doses of hydroxychloroquine in the Strategic National Stockpile that can't be distributed unless the FDA issues an emergency authorization. He asserted the Henry Ford study shows the drug works when used as an early treatment and said the FDA should take action "within days, not weeks or months" so he could send the shipments.

Trump has told aides that he sees the Detroit study as "vindication" of his position and wants the drug sent to hospitals across the country, in the words of another senior administration official who spoke on the condition of anonymity to discuss internal deliberations.A number of Trump political aides, along with the Republican National Committee and campaign officials, have also promoted the Detroit study.

Navarro said if the Detroit data is backed up by subsequent studies, "there is blood on the media's hands" for sowing doubts about the drug.

Navarro has loudly clashed with medical experts, including Anthony S. Fauci, director of the National Institute of Allergy and Infectious Diseases, over hydroxychloroquine and has become obsessed with promoting the drug, advisers say. While he is viewed by many colleagues as bombastic, sometimes uninformed and temperamental, he has maintained a close adviser spot in Trump's game-of-thrones White House by embracing and promoting issues like hydroxychloroquine and tariffs.

The FDA initially gave emergency use authorization to hydroxychloroquine in March based on scant evidence. The agency in April issued a safety warning about potential cardiac problems before withdrawing its approval last month.

The Henry Ford study, which involved more than 2,400 patients hospitalized between March and May, found death rates were 50 percent lower among the patients treated with hydroxychloroquine, the authors said. They also noted the drug posed no safety problems.

Henry Ford officials said the results were different from other studies that didn't show effects from the drug because they treated patients soon after they were hospitalized and used different dosages. They said they asked the FDA for emergency authorization for hydroxychloroquine "for a clearly defined list of clinical uses," including trials. The health system declined to make the authors available and the FDA said it would not comment on any pending submission.

"The FDA needs to very carefully and quickly consider the Detroit request - China virus cases are rising, Americans are dying, and hydroxychloroquine appears to be a very effective weapon when used in early treatment with virtually no downside risk," Navarro said. He said he had talked to someone at the FDA about the issue but declined to identify the person.

But the Henry Ford study has been sharply criticized by scientists who said it shouldn't be used to change policy. It was an observational study, considered much less rigorous than a randomized trial, in which patients are randomly assigned to receive a treatment or not. And its results fly in the face of three major randomized trials that have found hydroxycloroquine is not effective in treating or preventing covid-19.

Critics also noted that twice as many of the Henry Ford patients who received hydroxychloroquine also got a steroid - which has been shown to benefit covid-19 patients - compared to those who didn't get hydroxychloroquine. That made it hard to know which drug benefited the patients, they said. The authors made statistical adjustments to account for that, but other scientists said the methodology wasn't clear and that it is very hard to correct studies in that way.

"You want to look at the totality of the data," said Eric Topol, director of the Scripps Research Translational Institute. "The totality is overwhelmingly in the opposite direction. You have to conclude with the Henry Ford study is an outlier and there's some kind of confounder that is skewing the data and not representing the truth."

Doctors can still prescribe the drug for covid-19 because it is approved for other illnesses. But Navarro said that the FDA's safety warning and withdrawal of the emergency authorization had effectively killed demand. "In my discussions with the FDA, they seemed unaware of the massive depressive effect their decisions have had on use of the medicine," he said.

Peter McCullough, an internist at Baylor University Medical Center, said he agreed with Navarro that the FDA should change its position. "This is the public health crisis of the century and doctors should not have barriers,"he said, noting that some state medical boards are making it hard for doctors to prescribe the drug.

In recent interviews, Giuliani, the president's lawyer, said the studies discounting hydroxychloroquine are bogus. "They've thrown cold water on it because they are academics," he said, adding he has taken the drug three times without side effects.

Test results so far have been "silly," he said, adding that a police officer friend and others in New York have succeeded after taking it. "They don't know what they're talking about," he said of doctors warning against it.,

Any decision about reauthorizing hydroxychloroquine will be made by FDA career scientists, said an administration official who spoke on the condition of anonymity to discuss internal processes.

Many scientists said they doubted the FDA would move to reauthorize hydroxychloroquine based on the Detroit study, considering the price the agency might pay in credibility.

"When future coronavirus vaccines come up for FDA approval, the public should have full confidence that the FDA will make the correct decision to protect the public health by ensuring that vaccines are safe and effective," said David Boulware, an infectious-disease specialist at the University of Minnesota Medical School who conducted one of the major clinical trials on hydroxychloroquine.

Peter Lurie, a former top FDA official during the Obama administration, agreed it was unlikely hydroxychloroquine would be reauthorized. "That would be an about face of an about face," he said. Referring to the Washington suburb where the agency is located, he added, "White Oak will be suffering from dizziness if that keeps happening."