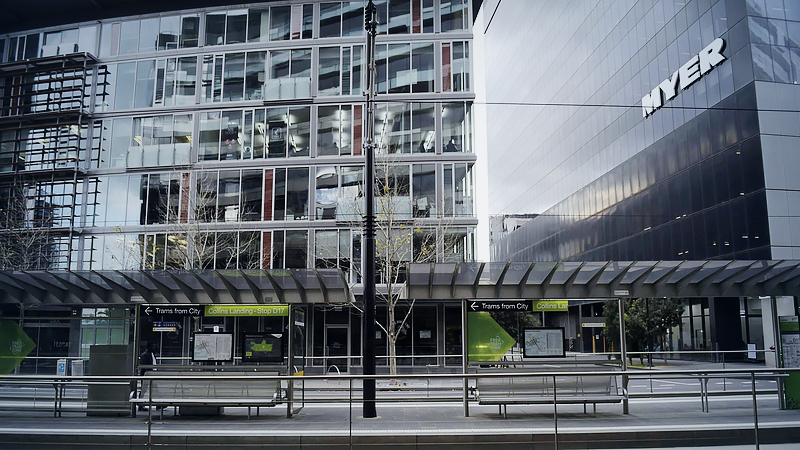 A tram stop stands deserted in the Docklands area of Melbourne, Australia, on July 9, 2020. MUST CREDIT: Bloomberg photo by Carla Gottgens.

Australia will halve the number of citizens who can return home each week to relieve pressure on its quarantine system as an outbreak in the nation's second-most populous state worsens, Prime Minister Scott Morrison said Friday.

Morrison also told reporters the process of quarantining arrivals in hotels would be reviewed, after missteps in Melbourne saw security guards contract the virus -- contributing to an outbreak in the city. Victoria state recorded a record 288 new cases in the past 24 hours, and urged residents to begin wearing masks -- a departure from the health advice issued so far in Australia's Covid-19 crisis.

More than 70,000 Australian citizens and permanent residents have undertaken 14-days of mandatory isolation at government-leased hotels since the crisis began, and the policy has helped contain the spread of the virus. But the system is creaking, particularly as flights are rerouted due to the outbreak in Melbourne, placing pressure on other parts of the country.

Many nations require incoming passengers to self-isolate, but only a handful including New Zealand and Vietnam mandate quarantine in hotels or other facilities. In South Korea, citizens can self-isolate at home but foreigners are quarantined at government-run sites.

Morrison said it was inevitable the cap on numbers would now make it more difficult for Australians to come home and lead to delays. Some 4,000 fewer people would be arriving home each week, he said.

The quarantine review will examine issues such as training for security guards and hotel staff, testing and management of suspected and confirmed cases.

Australia had enjoyed early success in crushing the curve of virus infections by shutting its international border, quarantining arrivals, social distancing measures and a widespread testing and tracing regime.

But a mixture of complacency as restrictions were eased, and missteps in Victoria's quarantine program, has seen a fresh outbreak that's led to Melbourne being placed in a six-week lockdown.

"Certainly 288 new cases today is a pretty ugly number," Victoria's Chief Health Officer Brett Sutton told reporters. He urged Melbourne residents to wear masks where social distancing was difficult, such as on public transport. Unlike countries such as Japan and China where mask-wearing is common to curb colds and flu and has been prevalent during the pandemic, the practice is rare in Australia.

Sutton said he expected the daily virus count to plateau in the next week, provided people follow stay-at-home directions.

Like other states and territories, Victoria ordered all international arrivals into hotel isolation. But instead of drafting in police to oversee the operation, as was done elsewhere in the country, the state farmed the task out to security firms without even inviting tenders for the contract, according to local media reports.

A litany of malpractice followed, the Herald Sun newspaper reported, including improper use of personal protection equipment, allowing families to mix in each other's rooms, and even some guards having sex with quarantined guests.

According to the report, the virus spread among the guards who car-pooled or shared cigarette lighters. They then unwittingly introduced the disease to their own communities in Melbourne's poorer and more multicultural suburbs where it spread through large family gatherings that breached social-distancing rules.

The six-week stay-at-home order in Melbourne is set to devastate the city's restaurants, cafes, beauty spas and small retailers, which were just taking their first tentative steps back to business-as-usual after an earlier nationwide lockdown.

The sweeping restrictions threaten to deepen and prolong Australia's first recession in almost 30 years. Victoria contributes about one-quarter of gross domestic product, but is now isolated from the rest of the country as other states shutter their borders against a worrying spike in community transmission.

Melbourne's travails also provide a cautionary tale for other big, service economy-driven cities such as London, that are reopening pubs and restaurants in a bid to jump-start their crippled economies.