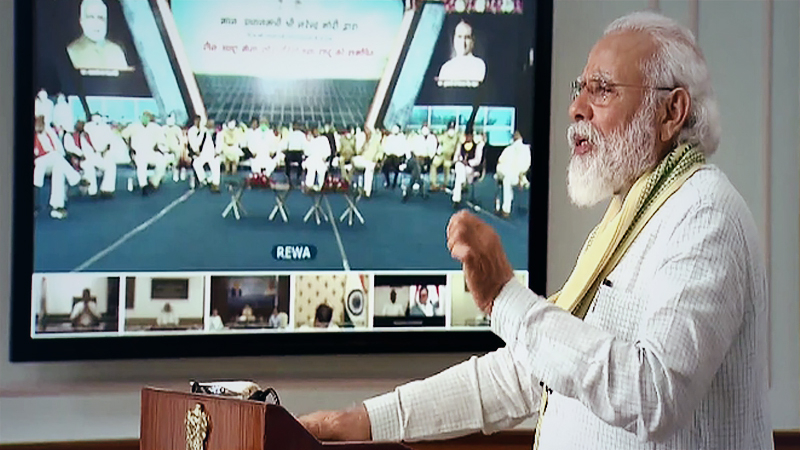 Twenty-four per cent of the solar power produced by the project will be used in the Delhi Metro and the remaining 76 per cent by discoms of Madhya Pradesh.

Prime Minister Narendra Modi on Friday dedicated to the nation a 750 MW solar project set up at Rewa in Madhya Pradesh through video conference from Delhi.

The solar project is said to be the biggest in Asia.

Addressing the event, PM Modi said with this solar plant in Rewa, not only industries in Madhya Pradesh will get electricity, but even the metro rail in Delhi will get its benefits.

Apart from Rewa, work is underway on solar power plants in Shajapur, Neemuch and Chhatarpur, the Prime Minister informed.

He said that, not just for the present, but solar energy will be a medium of energy needs of the 21st century because it is sure, pure and secure.

“Today, Rewa has really scripted history. Rewa is identified with the name of mother Narmada and the white tiger. Now, the name of Asia’s largest solar power project has also been added to it,” he said.

Congratulating the people of Rewa and Madhya Pradesh and extending them his wishes, PM Modi added, “This solar plant of Rewa will help in making this entire area a big centre of energy in this decade”.

The Prime Minister further reiterated his move to make India self-reliant. He said, as India moves towards new peaks of development and the demand for energy and electricity grows, “self-sufficiency in electricity is very important for a self-reliant India”.

“When we talk about self-reliance and progress, the economy is an important aspect. Policymakers from all over the world have been in dilemma for years whether to think about the economy or environment,” PM Modi was quoted as saying by Hindustan Times.

“As we are launching large projects of renewable energy, we are also making sure that our determination towards clean energy is seen in every aspect of life. We are trying that its benefits reach every corner of the country, every section of society, every citizen,” he added.

He said the way India is utilising solar power is being discussed across the globe. “Keeping this expectation of the world and the humanity from India, we are engaged in connecting the whole world. The result of this thinking is ISA which is International Solar Alliance. This is the spirit behind one world, one sun, one grid,” he said.

Twenty-four per cent of the solar power produced by the project will be used in the Delhi Metro and the remaining 76 per cent by discoms of Madhya Pradesh.

The Centre gave Rs 138 crore to RUMSL for the project for which Mahindra Renewables, ACME Solar Holdings, and Solengeri Power were shortlisted through reverse bidding for the three units at tariffs of Rs 2.979, Rs 2.970 and Rs 2.974 for the first year.

This is the lowest tariff ever discovered through a bidding process for solar projects in India.

The Government has claimed that the 750-megawatt ultra mega solar power plant will reduce emission equivalent to approximately 15 lakh tonne of carbon dioxide every year.

The Rewa Project also exemplifies India’s commitment to attain the target of 175 GW of installed renewable energy capacity by the year 2022, including 100 GW of Solar installed capacity.