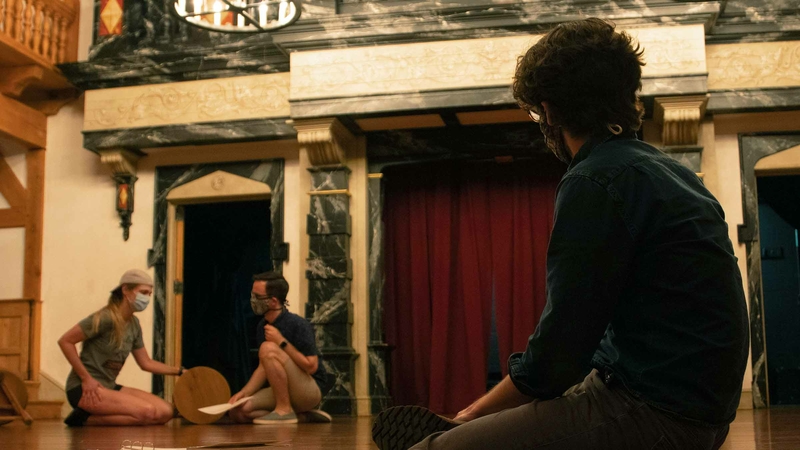 What American Shakespeare Center in Staunton, Va., is doing would have been considered unremarkable a few short months ago. Now, to some people, it will seem unthinkable. 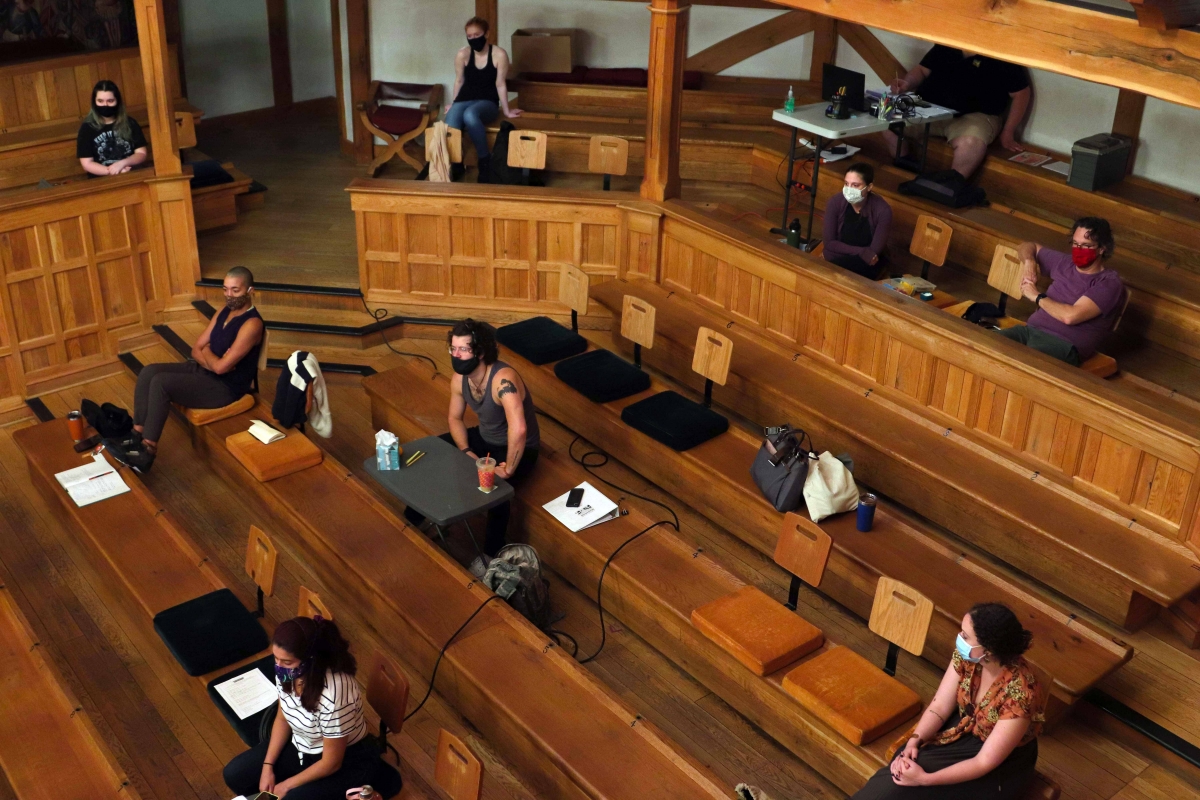 It is putting on a big play. On a stage. For an audience. In person.

Two plays, actually: "Othello" and "Twelfth Night," on a pair of stages, one outdoor, one indoor. Implementing a 12-page "SafeStart" manual that covers everything from mask-wearing to restroom use, the Shenandoah Valley company has deemed itself ready to reopen on July 25. And theatergoers from Virginia, Maryland, Pennsylvania and beyond are buying in.

When the shows start - in a makeshift outdoor space on a hotel lawn and in the company's Blackfriars Playhouse in downtown Staunton - ASC will be one of the first theater venues in the nation to get back to the art it was created for, in the physical surroundings built to accomplish it. How the company adapts to contact-free ticketing, touchless credit card sales and socially distant seating will be closely watched by other theaters around the country. And the scrutiny will not concern the success of the performances so much as the success of the safeguards for audience, actors and backstage crew.

"I've said to the company, we don't want to do this if we can't do it safely," said Ethan McSweeny, ASC's artistic director. "Are we taking a risk if circumstances change? Yes. Are we prepared for that risk? Yes."

The company's geographic isolation, in a city of 25,000 surrounded by bucolic Augusta County, 150 miles southwest of the District of Columbia, has made conceivable a return to the stage, when such a notion remains mostly a dream in Washington and New York. Staunton and its surrounding county, close to Charlottesville and encompassing part of Shenandoah National Park, have recorded a relatively small incidence of covid-19: 285 coronavirus cases and two deaths, as of Wednesday, in an area of 100,000 residents, according to the Virginia Health Department.

In addition to state and federal health guidelines, McSweeny also got advice from an infectious-disease specialist at a local community hospital, Augusta Health. But risk-reward questions remain. Will reopening now help secure the future of a 32-year-old classical organization that's built a following on its minimalist Renaissance performance aesthetic? Or will theatergoers prove too skittish to return - or, worse - subject themselves prematurely to the spread of the virus?

McSweeny says he's bolstered by the detailed rules that have been put in place, and by the vows of ASC's staff and acting ensemble to abide by the guidelines and protect one another, and the audience. "The region we are in has been relatively consistently mild throughout," he said, referring to the pandemic. "It is also important to me that our state has been as smartly responsive as any of those in the Northeast. We've been on a consistent but measured path."

The company has brought together 17 actors for the endeavor, including many of the group's stalwarts - some of whom had to hand in their union cards to participate. Actors' Equity, which represents 51,000 actors and stage managers nationwide, has set its own health and safety agenda for its members; it has placed ASC on a "Do Not Work" list with three other American companies. (ASC casts both union and nonunion actors.) That has meant that actors such as Brandon Carter, who will play Cassio in "Othello" and Duke Orsino in "Twelfth Night," had to quit the union to be employed.

"If you have the means to keep the theater alive, I think we should be taking the risk right now," Carter said. "I had to support my family, and the current (Actors' Equity) leadership wasn't speaking for me and what I agree with." He added that as "a blue-collar actor" who endorses unionization, he had a difficult choice, and he remained respectful of other Equity actors in the troupe who made a different decision. "It was heartbreaking, because it did tear up a family," he said. "We lost a few folks."

Zoe Speas, who plays Roderigo in "Othello" and will trade the sibling roles of Viola and Sebastian in "Twelfth Night" every performance with Mia Wurgaft, said she understood the outsize responsibility she was taking on. "This is a lifeboat, not just for us, but for the theater," she said. "We're not just doing a season of theater. We are trying to save theater itself."

The process of making theater, Speas added, has been "20 times harder than usual." The actors reported for work on June 9 for an initial two weeks of rehearsals on Zoom, during which they were required to quarantine. The pact they've made involves a bubble in which they limit contact to one another and household members. Any deviation must be hashed out. According to McSweeny, one actor, an avid swimmer, got the group's permission to work out in an outdoor pool, provided she reserve an isolated lane entirely for herself.

The pressures of returning to the complexities of Shakespeare amid new rules of engagement have been magnified by another reality: acknowledgment of Black Lives Matter issues concerning white supremacists and racial injustice, reignited after the killing of George Floyd in Minneapolis police custody in May. Inevitably, the diverse ASC cast - returning with, of all plays, "Othello," which deals with the psychological torture of an innocent black man by an evil white tormentor - would have to confront contemporary reality head on. That Othello was being played by a black actress, Jessika D. Williams, made for an intriguing talking point, but venting the pain felt by many in the company proved far more essential.

"It immediately became clear, especially to the actors of color in our company, that they could not literally start safely rehearsing without addressing these long-term concerns," McSweeny said. Or, as Speas put it: "Usually, you get to leave the baggage outside the door. Now, the walls are permeable."

So inside the bubble, regular conversations are held, to air thoughts on all sides. "We've had several 'come-to-Jesus' moments - not just the cast, but the leadership - about the illusion of diversity, versus real diversity," said Constance Swain, an actress of color playing Olivia in "Twelfth Night" and Emilia in "Othello." The talks have been intense: "I feel like this pandemic and this uprising that's been going on have really made us raw to one another," she added.

For Williams, the talking has helped to build insight into Othello and the perspective she can bring, "from the feminine parts of me." And for John Harrell, a white ASC player cast as the villain, Iago, opening himself up to views of his castmates offers its own kind of illumination, in dark times. "It dawns on me daily," he said, "how new a world it is."

The newness extends to the mind-boggling matrix of decisions involved in interacting physically on a stage. After two weeks of Zoom, the actors gathered together for the first time on June 23 in Blackfriars Playhouse, the 300-seat theater modeled on Shakespeare's own. But what does socially distanced Shakespeare look like? In a mask, how does an actor read expressions? What's the protocol when a stage direction calls for a kiss? And, even if physical trust has been established between actors, will an audience be comfortable bearing witness to them in close contact?

The question that has loomed over every rehearsal of McSweeny's "Othello" and the Dan Hasse-directed "Twelfth Night" is what happens when the masks come off, as they're expected to for public performances? "The one thing you learn the first week being an actor is actors spend all day spitting on you," Harrell said. "That's just part of the job."

Amy Wratchford, ASC's managing director, has been addressing some of the "front-of-house" challenges, such as socially distanced seating. In the playhouse, that has meant reducing ticket availability per performance to a little more than 100 - one third of the theater's capacity - with the backs of vacant seats removed. Tickets will range from $33 to $60. Deep cleaning will be the norm.

At the outdoor space - on the grounds of the nearby Blackburn Inn, a luxury hotel that was once a mental hospital - tickets will be sold for 60 blocks of grass, each 8 feet by 8 feet, on which blankets can be spread. Each block can accommodate four people; the hotel will allow patrons to preorder picnic baskets and beverages, Wratchford said. There will also be 22 "chair spaces," each with room for two folding chairs. The spaces go for $40 each.

How the public responds is the cliffhanger; Wratchford is projecting ASC will sell an average of 60 seats at each Blackfriars performance and fill about 60 percent of the spaces at the outdoor venue. Before the pandemic, box office revenue was $50,000 a week, which will not be matched: On a recent weekday, ticket sales were $2,000, Wratchford said, adding that the company has about $500,000 on hand, cash that will get it through August.

The actors are making strides toward giving the summer crowd its money's worth. To that end, Wurgaft, who is playing Desdemona, and Williams, her Othello, took a leap of faith: In a doge palace scene, a masked Wurgaft ran across the stage and into the arms of Williams, who was also masked.

Hardly revolutionary in ordinary times. Which these are not.

"It is exciting," Williams said, of being a working actor, in an era when stage jobs are scarce. "It seems unreal. But so does everything."