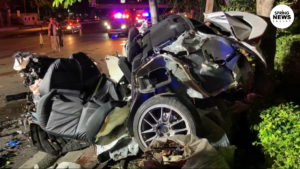 Three were people were killed and one person seriously injured when a speeding car crashed into an electricity post before dawn on Sunday (July 12) in the Bang Phlat district of Bangkok.

Police suspect a combination of slippery road and speeding caused the accident in which bodies of two of the dead persons as well as the injured person flew out of the car.

Police found the wrecked car's roof was ripped open and the body of one deceased person  stuck in the driving seat. Rescue volunteers had to cut open the metal to take the body out while the bodies of the other two deceased -- a man and a women -- were found lying far away from the car.

The survivor, a male, who also flew out of the car was lying on the ground unconscious. He is suspected to have had a seizure due to the shock of the incident. He was sent to Vajira Hospital for treatment.

Officers from Bang Phlat Police Station believed the car was going at high speed when it began to lose control due to the wet road surface following rain, resulting in the car hitting an electric post.

Police is collecting footage from surveillance cameras in the area to conclude its investigation.