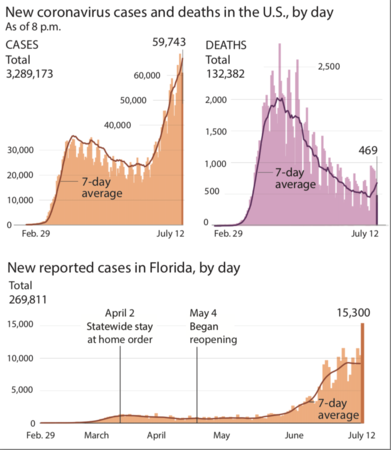 Florida on Sunday reported a record 15,300 new coronavirus cases, the most by any state in a single day and a bleak sign of the United States's failure to control the pandemic about six months after the first infection surfaced in the country.

The number was the result of increased testing and widespread community transmission that has affected the state's population centers as well as its rural areas. It shattered previous highs of 11,694 reported by California last week and 11,571 reported by New York on April 15.

"With Florida largely open for business, I don't expect this surge to slow," wrote Natalie Dean, an assistant professor of biostatistics at the University of Florida.

The latest spike puts Florida at the center of the country's faltering pandemic response, highlighting the ongoing struggle of state governments to gain an edge on the virus as the White House maintains its largely hands-off approach.

The seven-day average for daily new cases nationwide, considered a more reliable indicator of the virus's impact than single-day totals, has risen almost 165% over the past month, from 20,594 in the second week of June to 54,499 at the end of last week, according to tracking by The Washington Post. The country's daily death toll also increased last week after months of decline.

In the last week alone, Florida reported nearly 70,000 new cases, the most of any state. An influx of coronavirus patients is straining the Sunshine State's hospitals, and coronavirus-related deaths in the state are trending upward after leveling off in the late spring.

Amid the soaring numbers, Florida Gov. Ron DeSantis, a Republican, has stuck to an aggressive reopening plan. In addition to guests returning to Disney World, state officials recently ordered schools to reopen five days a week in the new academic year, drawing objections from local leaders. The state is set to hold the Republican National Convention next month in Jacksonville's VyStar Veterans Memorial Arena, an indoor facility that seats about 15,000 people.

The governor sought to project calm at a news conference Saturday, emphasizing that many new coronavirus patients were young and healthy.

DeSantis added that he believed the risk to schoolchildren was low, though health experts say it remains unclear what role children and teenagers play in transmitting the virus. DeSantis also voiced concern about Florida's rate of positive test results climbing into the double digits.

Shortly before Florida announced the new cases on Sunday, Education Secretary Betsy DeVos made rounds on news talk shows, where she continued to pressure schools to reopen.

In an interview on CNN's "State of the Union," she said she would like to see closed schools be the "exception" rather than the norm. Asked about surging caseloads in much of the country, she replied that schools could respond to "little flare-ups" in the future but that they should generally be open for full-time learning.

DeVos added on "Fox News Sunday" that the Trump administration was looking at "all the options" for pulling federal funding from schools that don't open in the fall. Her remarks drew criticism from House Speaker Nancy Pelosi, D-Calif., while the government health official in charge of testing signaled that the virus was still spreading too quickly to allow children to return to classrooms.

DeVos, Trump and other senior administration officials spent much of last week leaning on schools to reopen. They said children suffer academically, socially and emotionally when they are away from school and said remote learning this spring was a disaster for many families, points that outside experts also have made. And they said it was impossible for some parents to return to work if their children are at home.

Trump allies also see a political imperative in persuading voters that the nation is recovering from the pandemic, which will be difficult if millions of families' lives are still upended by school closures.

Last week, a Kaiser Family Foundation analysis estimated that there are nearly 1.5 million teachers, about 1 in 4, who are older than 65 or have health conditions that put them at higher risk of serious illness if they were to contract covid-19, the disease caused by the novel coronavirus. Asked about the finding, DeVos said there are ways for teachers to continue to work and that districts should collaborate with those teachers to "figure out the best scenario for those teachers."

Pelosi called DeVos's message "malfeasance and dereliction of duty" in an interview with CNN on Sunday, and she accused the Trump administration of "messing with the health of our children."

Pelosi urged Trump to invoke the Defense Production Act to make sure schools had access to personal protective equipment as the academic year approaches. She also said the Centers for Disease Control and Prevention should take the lead in mandating health guidelines, rather than just offering guidance.

In Florida's Miami-Dade County, Schools Superintendent Alberto Carvalho said students could return to classrooms six weeks from now if people adhered to restrictions such as wearing masks and practicing social distancing. But the decision would require buy-in from the community and must be dictated by science, he said.

"We need the science to drive the practice rather than politics influencing what is legitimately a community concern," Carvalho told NBC News's "Meet the Press," adding that the positivity rate in the county had gone from 6% to 29.1% in recent months.

Even in places that have not registered a sharp rise in new cases, officials are resisting instructions to bring students back. Maryland Gov. Larry Hogan, a Republican, said Sunday during an appearance on "Meet the Press" that his state would not be "rushed into" fully reopening schools and that it would take a hybrid approach to education during the pandemic.

Michigan Gov. Gretchen Whitmer, a Democrat, has said she wants schools to be able to reopen, but rising case numbers make it "very much in question." In California, Gov. Gavin Newsom, a Democrat, said local officials will decide whether to open their schools based on the spread of the virus there.

"What we need to address is safely reopening the schools, and we need to make that a foundational principle," he said Wednesday at a news conference. "That to me is not negotiable."

New testing, meanwhile, is slowing nationwide after increasing throughout the spring. About 4.6 million diagnostic tests were administered in the U.S. last week, compared with about 4.5 million the previous week, according to the Covid Tracking Project.

Brett Giroir, an assistant health and human services secretary who is the government's coronavirus testing coordinator, pushed back against Trump's criticism of the CDC's guidance for schools.

"When we get the virus more under control, then we can really think about how we put children back in the classroom," Giroir said during an appearance on ABC News.

He painted a dim picture of what's to come in the months ahead, saying he expects the number of hospitalizations and deaths to rise. He said the country would need "tens of millions of more tests a month" as seasonal respiratory infections return in the fall.

"We were hopeful that it would diminish in the summer, but we didn't count on it," Giroir said. "And, yes, there's a possibility it could be worse in the fall, and we are all continuing to increase everything we do."