The closure of the local watering hole - maybe temporary, maybe not - started with a bright yellow T-shirt inscribed with three words: "I can't breathe."

Daryl Rollins bought the shirt in the wake of George Floyd's death in Minneapolis police custody. Rollins, who is black, said he had never personally experienced discrimination until a recent Friday, when he wore the shirt while waiting in line at the Fish Market of Maryland in Clinton. 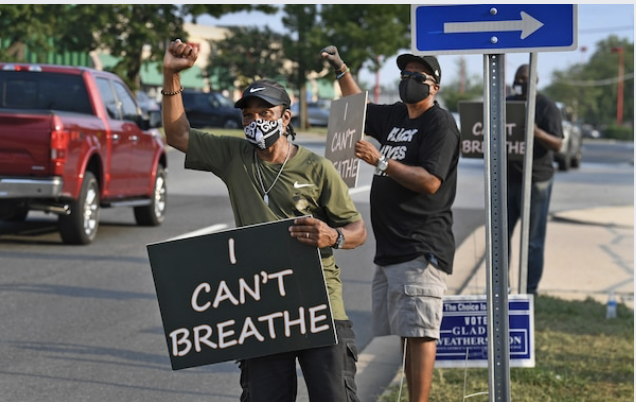 "You can't wear that shirt in my establishment," Rollins said owner Rick Giovannoni, who is white, told him, insisting he take the T-shirt off or turn it inside out.

The episode struck a nerve in Prince George's County, a majority-black suburb of Washington where residents have long complained that they do not have the high-quality restaurants and retail establishments that thrive in neighboring jurisdictions.

After an account of the June 26 incident went viral, residents launched daily protests, a boycott of the restaurant and a demand that it be sold - preferably to owners who are African American.

"We deserve better," said Rachel Sherman, a nurse practitioner who is organizing the daily protests outside the Fish Market, located near Joint Base Andrews. "It's not just this one isolated incident - this is about serving notice to other business owners that this is what is going to happen if we are not respected."

Neither Rick Giovannoni nor his wife, Sherry Giovannoni, a co-owner, responded to requests for an interview. The restaurant has been closed since June 28.

Rollins, a 43-year-old father of two who grew up in Prince George's, said Sherry Giovannoni apologized to him a day after the incident and attributed her husband's behavior to a mental health condition. Rollins said he appreciated the gesture but did not think it made up for her husband's actions.

"If you can't appreciate your patrons, why should you have a business?" he said.

Rollins had never been to the Fish Market before that Friday in June. He said Giovannoni first approached him to say he had seen the video of Floyd's death and thought it was "horrific." He then told Rollins that he could not wear the shirt inside.

Black employees persuaded Giovannoni to allow him to enter and be served, Rollins said. As he walked outside again, he recalled, he heard Giovannoni say he wanted to "smack the guy in the yellow shirt."

"I looked around, and I was the only guy wearing a yellow shirt," said Rollins. "I was surprised. I never thought I would have to live through this moment."

Rollins was headed to his car when Anthony Bethea asked whether he could take his photo and post about what had happened.

Bethea, a 55-year-old Metro supervisor, lives in Clinton and had long thought of the Fish Market as "our 'Cheers' bar" - a neighborhood joint that hadn't been renovated in years but was a spot for friends to gather.

He'd heard rumors over two decades, though, about how Giovannoni had made racist comments, including a racial slur that some regulars said they heard him use when Barack Obama was elected president in 2008 and 2012.

And he said he saw a parallel between what he witnessed at the Fish Market and reports he read about a Baltimore restaurant denying service recently to a young black boy for wearing shorts, even though his mother took a video that showed a white boy in similar apparel who was allowed to eat there.

The morning after he saw Giovannoni clash with Rollins, Bethea posted his photo of Rollins in the yellow T-shirt to Facebook, writing: "At this moment in our nation's racial unrest, inequality, and injustice, this guy was told by the owner of the Fish Market that he could not wear his 'I can't breathe' T-shirt into their establishment. I guess maybe only our Black dollars matter."

The post has been shared more than 1,600 times and sparked the creation of "We The People of P.G. County," where activists coordinate the protests, which both Rollins and Bethea have joined.

Beginning about 3 p.m. daily, dozens of people, young and old, gather across the street from the Fish Market.

They come with lawn chairs and signs: "The fish market is cancelled" and "Black lives matter." They raise their fists in the air when cars pass, many of which pull over on the side of the road to thank the protesters for being there, said organizer Joseph Tolbert, 44, who carries a microphone and often declares: "If you don't respect black people, you're not going to get our money."

Tolbert said protesters - some come after work and others are furloughed because of the coronavirus pandemic - are not begging for respect, but demanding it. Among them is Carla McClinton, a 61-year-old real estate agent and Fish Market regular who said she is ashamed that it took so long for her and other longtime customers to take a stand.

McClinton said two of her children worked at the Fish Market as teenagers. She likes the Giovannoni family personally. But she said customers have long known that Rick Giovannoni makes racist comments, which they often brushed off. Once, in the early 2000s, she said, he used the n-word when he was talking to her, then told her that he was only joking when she objected. She boycotted the restaurant for six years after that, until friends persuaded her to return.

"It doesn't give me great pleasure to do this," McClinton said of joining the protests. "But he did this at the wrong time."

Bethea said he and his friends initially considered trying to pool their money to buy the Fish Market. "We got to own more stuff out here," he said. "Blacks need to open more businesses in their neighborhoods so they don't experience this."

Protesters say their efforts are linked to the history of Prince George's, a once white, working-class suburb that grew more affluent as a generation of African American professionals moved in and whites left.

Some black- and Latino-owned businesses have thrived in the county, but few residents believe there are enough, said Marcus Daniels, a 32-year-old real estate broker and lifelong resident who has been attending the protests.

"We need more," Daniels said. "We need to encourage more entrepreneurship in the African American community and think about how the community can start to reinvest in itself."

Prince George's Executive Angela Alsobrooks, a Democrat who grew up in the county, said her parents live near the Fish Market and told her that they stopped going years ago because the establishment was notorious for "disrespect and the racial comments."

"We work hard for our money here," Alsobrooks said. "We don't have to patronize businesses that don't respect us. This is a new day."

David Harrington, president of the Prince George's County Chamber of Commerce, said businesses need to be seen as assets to their communities.

"Here is democracy in action," he said. "Businesses have to be a lot more sensitive to where they are located."

Prince George's County Council member Mel Franklin, a Democrat who has worked to promote black-owned business for more than a decade, said the national reckoning over racial inequity has given new momentum to old conversations about the need to break down barriers for business owners in a county that is 64% black and 19% Latino.

He said part of the burden falls on lawmakers to invest public dollars where they say their priorities are, noting that a disparity study showed that 14% of the more than $2 billion that Prince George's spent on contracts between 2010 and 2018 went to black-owned businesses.

"You have to ask the question: Why is that still the case in 2020? There is no easy answer," Franklin said. "We as a county haven't made it a big enough priority to spend our dollars with people of color."

Alsobrooks said that since she took office in December 2018, one of her top priorities has been boosting support for small and minority-owned businesses, including making the procurement process for contracts more transparent.