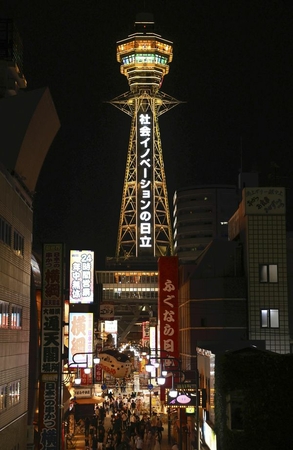 Tsutenkaku tower in Naniwa Ward, Osaka, is illuminated in yellow on Sunday evening. (The Yomiuri Shimbun)

OSAKA — Landmark towers in Osaka were illuminated in yellow Sunday, as the prefectural government announced the confirmation of 32 additional cases of the novel coronavirus.

Tsutenkaku Tower was one of the locations illuminated as a “yellow alert” according to the “Osaka model,” a set of independent criteria upon which decisions such as the urging of self-restraint from outings or the lifting of such requests are made.

Because young people who visit nightlife areas risk spreading infections to those middle-aged and older, the prefectural government has urged locals to refrain from visiting such places on the basis of the revised law concerning special measures to cope with new strains of influenza.

According to the prefectural government, the 32 newly confirmed cases range from preschool children to people in their 70s, with all 32 either showing minor symptoms or being asymptomatic. Among these people, the infection routes were unknown for 21 of the patients. By age group, 21 patients were people aged 39 or younger.

First, the number of cases with unknown infection routes is double or higher compared to the average from the previous seven days.

Second, the average number of cases with unknown infection routes is 10 or more.

And finally, at least 120 new cases have been confirmed within the past seven days, with over half of those being identified in the last three days.

On Sunday, the number of cases with unknown infection routes over the past seven days had risen to 2.16 times the average previous level. The average of such cases was 13.29, and 142 new cases had been confirmed. As all the criteria were met, Osaka’s Tsutenkaku Tower and the Tower of the Sun Museum at Expo’70 Commemorative Park in Suita were illuminated in a yellow warning light from 8 p.m. Sunday.

The prefecture’s infection total has reached 2,027, making Osaka the second prefecture to exceed the 2,000 mark after Tokyo.

Since mid-June, there has been a conspicuous rise in the number of infections among young people, but the prefectural government said that these infections may be spreading from this age group to people aged 40 and older. Such a case was confirmed on Sunday — a man in his 20s had infected members of his family with whom he lived.

The prefectural government on Sunday held a countermeasure task force meeting where decisions were made on such issues as requesting self-restraint from outings among residents until the end of this month and avoiding establishments where proper infection prevention measures have not been taken.

The task force will decide whether the request should remain in place through August based on the status of the infections in the days ahead.

“We would like people to avoid environments where saliva could fly about,” Osaka Gov. Hirofumi Yoshimura told reporters after the meeting. “In particular, we’d like those engaged in work related to nightlife districts to take thorough measures to prevent the spread of infections.”