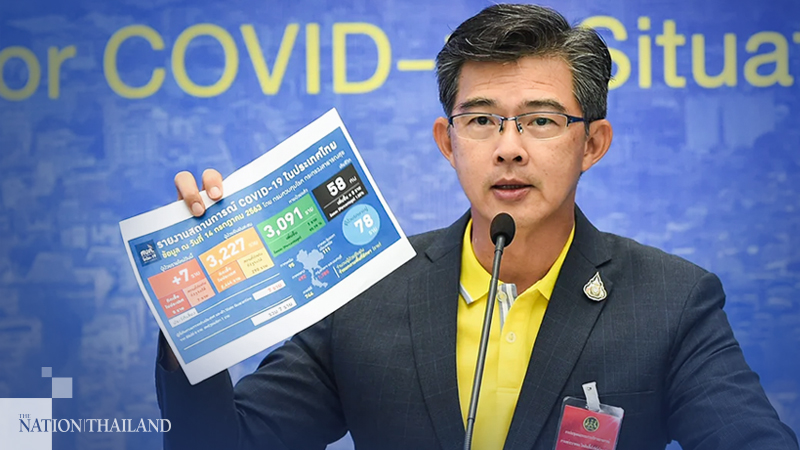 With the case of an infected Egyptian soldier in Rayong causing consternation and criticism, Dr Taweesin Visanuyothin, the spokesman of the government’s Centre for Covid-19 Situation Administration (CCSA), apologised today (July 14) for the “flaw” and “mistake” regarding who should be quarantined, as he reported the full timeline of the case:

A group of 31 Egyptian military personnel travelled on two C-130 air force planes – flights EGY1215 and EGY1216 – to Thailand. They first flew from Egpyt to the United Arab Emirates on July 6 and left the UAE for Pakistan on July 7. They arrived at Thailand's U-Tapao Airport at 7pm on July 8 and checked into Rayong’s D Varee Diva Central Rayong hotel at 11pm that day.

On July 9, they headed out at 5.30am to U-Tapao Airport to fly to Chengdu, China, on an unspecified mission.

On July 10, the group returned to U-Tapao at 2am and headed straight back to their hotel – DVaree. Later that morning, at 11.20am, they split up into two groups, each going to a department store.

The infected soldier was among 27 of one group who visited Laem Thong department store from 11am to 2.59pm. The other four meanwhile took a taxi to Rayong Central Plaza, entering the plaza at 2pm and exiting at 6pm.

None of the 31 left their hotel that night as they had a mission early the next morning and departed the country.

CCTV footage at DVaree hotel showed only three of the 31 Egyptians wore a mask when going out, though all of them carried masks. The infected soldier was one of the three wearing a mask.

The 31 were allowed to enter the country without undergoing quarantine as they were operations staff of military vehicles/planes that needed refuelling and a short stay in Thailand. However, the Egyptian Embassy failed to immediately notify the CCSA or health officials in Rayong and instead contacted DVaree hotel directly for rooms for the group. Local health officers finally turned up at the hotel on July 10 to test the Egyptian personnel for Covid-19.

The group at first rejected any testing, but after their embassy intervened they finally agreed to a swab test. Thirty of them were subsequently confirmed as negative, but the result of the test on one soldier was not clear.

On July 11, all 31 personnel left their hotel and departed Thailand.

It was on July 12 that the test result confirmed the soldier was infected with Covid-19, but by that time he had already left the country with his group.

The Thai Chana platform has now alerted 392 of 394 people who visited the Laem Thong department store at the time the infected Egyptian soldier was there. The remaining two could not be contacted because they provided wrong phone numbers or deliberately gave fake numbers.

Dr Taweesin apologised for the “flaws” in relaxing quarantine for people entering the country and vowed to “correct the mistake”. The CCSA is now reconsidering the relaxation measure for foreigners who enter Thailand.

He said this was not a VIP case but an “ordinary exception” for the Egyptian military personnel who needed refuelling and a short stay. However, while others who entered the country normally came through Suvarnabhumi Airport and stayed in Novotel hotel, the Egyptian military personnel used U-Tapao Airport, which was not prepared, he said. The CCSA will now make sure that every airport is fully prepared, he added.

Dr Taweesin asked Rayong residents who did not visit the Laem Thong department store or DVaree hotel not to panic. If no domestic case is found during this 14-day period, Rayong will be declared a safe area again, he said.

Everyone is keeping their fingers crossed.