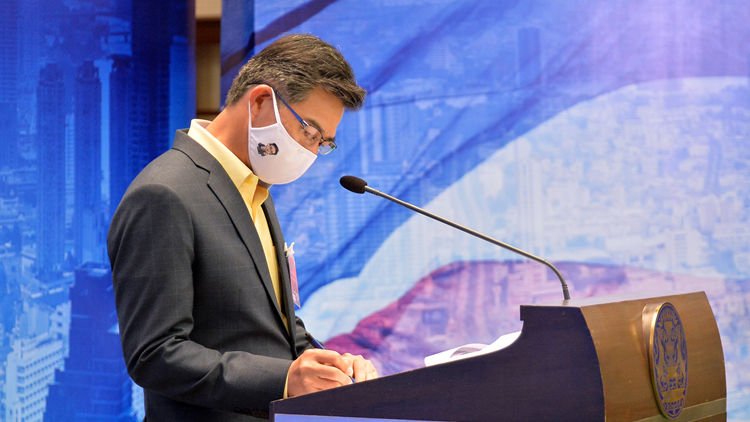 The 9-year-old daughter of the Sudanese ambassador who tested positive for Covid-19 after arriving in Thailand on Thursday (July 10) was not taken shopping in Bangkok on the same day, as rumoured.

Taweesin Visanuyothin, spokesman of the government’s Centre for Covid-19 Situation Administration (CCSA), dismissed the rumour while announcing the full timeline of the girl, who was among 12 new cases reported on Saturday (July 11).

She and other family members travelled from Omdurman province in Sudan, where she lived in a house with her grandfather, grandmother, parents and three sisters. The girl and other family members had not left the house since March 12, with only her mother running errands. Nobody in the house had shown any symptoms during the period of self-isolation.

Sudan is currently suffering a serious outbreak of Covid-19, with more than 10,000 confirmed cases and 657 deaths as of yesterday.

On July 7, the mother and her four daughters visited a hospital for Covid-19 swab tests in preparation for their journey to Thailand.

On July 9, the family travelled to Khartoum Airport in a personal car driven by the grandfather. They boarded EgyptAir flight MS3277 along with 245 Thai citizens. The plane refuelled at Cairo Airport where no passengers disembarked.

The flight arrived in Bangkok at 5.40am the next day (July 10). The family received Covid-19 swab tests at Suvarnabhumi Airport then transferred to ONE X condominium in downtown Bangkok. At 9.25am, the daughter (wearing a mask), her younger sisters and mother (not wearing masks) use number 3 elevator to reach their apartment on the 19th floor. Soon after Suvarnabhumi medics informed the family that the 9-year-old daughter had tested positive for the virus. She was then taken to Phayathai Nawamin hospital by the embassy bus at 11.38am, accompanied by her father, the ambassador. She was found to be suffering from Covid-19-related pneumonia and transferred to Queen Sirikit National Institute of Child Health.

On July 10-11, the remaining family members self-isolated in their apartment and did not use any of the condo’s facilities. They transferred to the Sudan embassy’s guesthouse on July 12 at 4am.

ONE X condominium has a history of two other cases of Covid-19, confirmed back in March.

The CCSA said seven people were at high risk of infection after coming into close contact with the ambassador’s daughter. These are her three family members, a driver, an embassy official, and two airport bus drivers. Meanwhile 15 residents of the condominium who used the same elevator on the same day as the infected girl are also being monitored for infection.

The CCSA also debunked a rumour that the daughter had been taken shopping by Skytrain to Terminal 21 mall and other places in Bangkok. She had in fact gone straight to hospital, said Taweesin.