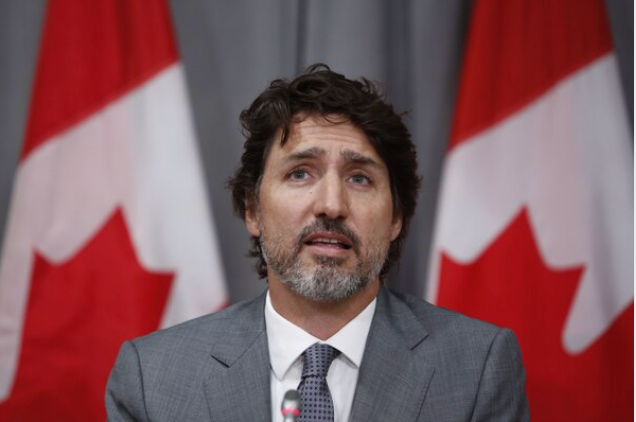 The Canadian leader, who finds himself under investigation for a third time by the country's ethics watchdog, is relying on an approach he's used in the past to get himself out of tight spots: eating humble pie.

At a press conference on Monday, Trudeau offered up a "should have known better" public apology, this time for his involvement in awarding a CA$20 million ($14.7 million) government contract to a charity that has close ties to his family.

While pollsters say they have no reason to believe the apology won't work again this time, Trudeau's ability to mire himself in controversy continues to be one of the defining aspects of his leadership -- limiting his ability to make sustained gains in popularity outside Liberal Party loyalists.

"We're starting to see fault lines appearing in terms of how divided Canadians could get over questions of Mr. Trudeau and his leadership," Shachi Kurl, executive director at the Angus Reid Institute, said by phone Monday. "The Liberal base largely sticks with him, but those who voted for other parties in the past, we start to see their approval of him begin to soften."

The latest crisis comes with support for the prime minister riding high, driven by a government response to Covid-19 that's been widely lauded. Trudeau's handling of the crisis has helped him recover positive rankings among Canadians of all stripes to levels he hasn't enjoyed since early in his first mandate.

Angus Reid's polling shows Trudeau's approval rating jumped to as high 55%, from 33% in February. That's already beginning to come down, though, in the face of the scandal.

This isn't the first time Trudeau has courted controversy. He was accused of groping a reporter before entering politics. He was reprimanded by the ethics watchdog for a secret vacation in 2016 at the private island of the Aga Khan, the spiritual leader of Ismaili Muslims. There was an embarrassing state visit to India, where he was criticized for over-the-top attire and rubbing elbows with Sikh separatists.

Ahead of last year's election, Trudeau was dogged by accusations he sought to intervene in a criminal case on behalf of well-connected Montreal construction giant SNC-Lavalin, leading to another reprimand from the ethics watchdog weeks before the campaign began.

Perhaps the most devastating of all were revelations in the middle of the election that he wore blackface at least three times when he was younger. While the prime minister apologized for that too, and eventually won the election, the result was disappointing for the Canadian leader. He lost his parliamentary majority and returned to power with the lowest share of the vote for any government in the nation's history.

Controversy erupted again when Trudeau's government appointed the WE Charity to administer the Canada Student Service Grant, a CA$900-million Covid-19 aid program that provides grants of as much as CA$5,000 to postsecondary students who volunteer over the summer.

The prime minister and his wife have regularly spoken at the charity's events, and revelations have emerged that the for-profit arm of the organization paid hundreds of thousands of dollars in speaking fees to Trudeau's mother and brother.

Addressing the furor for the first time Monday, Trudeau acknowledged he shouldn't have taken part in the decision and apologized for his role in approving the contract. "I made a mistake not recusing myself immediately from the discussions given our family's history and I am sincerely sorry at not having done that," he told reporters in Ottawa.

Finance Minister Bill Morneau has also been drawn in, due to his daughter's employment by the charity. He tweeted an apology for his involvement later in the evening.

Even with the mea culpas, the scandal could continue to dog the prime minister. Opposition parties have called on Trudeau to resign and for the Royal Canadian Mounted Police to look into the matter.

The optics are bad. The prime minister's wife, brother and mother received more than $350,000 in speaking fees from WE, according to a report by the Canadaland podcast.

Trudeau acknowledged Monday that while he was aware that his relatives work as professional public speakers, he "did not know the details" of their arrangements with the charity.

Only time will tell if the prime minister's knack for dodging political bullets will get him through again. He'll need to muster all the good will he can get, as his minority government embarks on the biggest program of fiscal support in the modern era.

"The longer something sticks around, the higher the risk to Trudeau's leadership, his approval rating and what Canadians think of him," Kurl said. "I wouldn't say he is out of the woods yet."