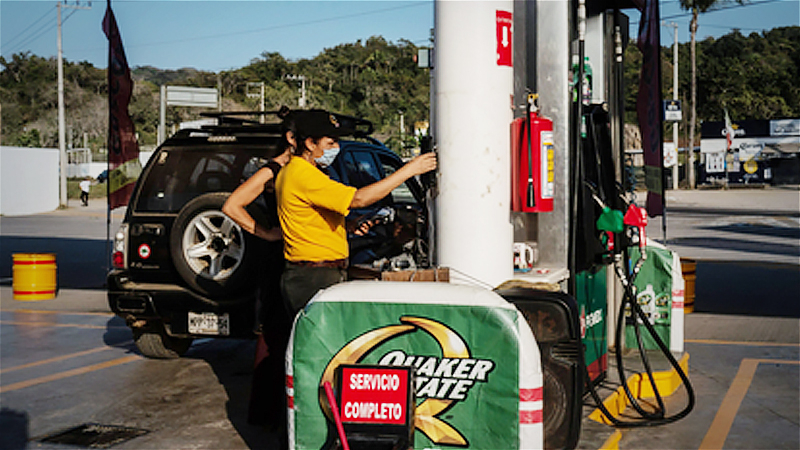 At attendant wearing a protective mask assists a customer at a Pemex gas station in San Francisco, Mexico, on April 22, 2020. MUST CREDIT: Bloomberg photo by Cesar Rodriguez.

Of all the companies around the world affected by covid-19, none has disclosed a worse death toll than Pemex, Mexico's state-owned oil producer.

Petroleos Mexicanos, as it's also known, said late Tuesday that 202 employees and five contractors have died of the disease so far. No other company has reported fatalities that come anywhere near that number, according to data reviewed by Bloomberg.

The closest comparison may be New York's Metropolitan Transport Authority, which has lost at least 131 workers. Pemex's toll also exceeds the 132 recorded by the entire U.S. meat and poultry industry as of July 14, which has four times the workforce and has suffered deadly outbreaks at processing plants.

Indeed, possibly the only institution with a confirmed toll higher than Pemex's may be the U.K.'s National Health Service, which isn't a company so much as a collection of health-care systems employing over 1 million people, many of whom have been on the front line of the battle against the virus.

It's not clear why Pemex's tally is so high, but social distancing is difficult on offshore oil platforms, and the company may initially have been slow to enact protective measures such as sending workers home, according to Silvia Ramos Luna, the general secretary of the National Union of Petroleum Technicians and Professionals. Many of the oil giant's workers have pre-existing health conditions such as diabetes and hypertension, which may have contributed to the problem, she said in an interview.

A Pemex spokeswoman declined to comment on its virus data. The company previously said it has taken measures including sanitizing work spaces and evacuating some workers from offshore platforms. It has adopted stricter safety protocols, such as temperature checks and rapid diagnostic testing, that Ramos Luna's union had requested, and the rate of deaths appears to be declining as a result, the general secretary said in an interview. Shutting platforms and refineries isn't practical because Mexico needs the gasoline and diesel, she added.

Corporate disclosures on virus infections and fatalities are patchy at best and prevent reliable international comparisons. Pemex stands out for being unusually transparent, while most of its oil and gas peers don't report detailed covid-19 numbers.

But the company's high death count raises inevitable questions about conditions for a workforce that totaled 125,735 at the end of 2019. Pemex is a major operator of offshore platforms, which typically house hundreds of employees in shared sleeping quarters and crowded dining halls. "The biggest problems have been on the platforms, for obvious reasons," said Ramos Luna, whose organization has about 2,500 members and competes with the official Pemex union.

The deaths at Pemex are contributing to a rapidly worsening outbreak in Mexico. Data released Sunday show the country surpassed Italy in the number of Covid-19 fatalities and has the world's fourth-highest total. As many as 683 health workers had died due to the coronavirus as of June 28, according to data from Mexico's Ministry of Health.

Pemex's high death toll is "not like a normal metric that you look at when you evaluate either the credit or the equity value of a company, but it's horrible," said Wilbur Matthews, founder of Vaquero Global Investment, which trades in Pemex bonds.

Even before the pandemic hit, the company was no model for health and safety. Pemex reported 10 worker deaths last year, five times as many as Petrobras, even though the Brazilian state-run oil company has half the number of employees.

At least eight patients died at a Pemex hospital after receiving contaminated heparin during hemodialysis treatments, the company said in March. Pemex operates a vast network of medical facilities including 21 hospitals that serve workers, their relatives and retirees.

It has issued covid-19 tests for less than 1% of a population of about 750,000 people in its health-care system. There were 4,119 positive tests as of Tuesday.

Some observers have applauded Pemex for its transparency when it comes to covid-19 data. Pemex publishes the number of coronavirus cases and deaths on a daily basis, whereas companies including U.S. and European oil majors like Exxon Mobil and Royal Dutch Shell don't.

"It's really good that they actually do release this kind of data," said Duncan Wood, director of the Woodrow Wilson Center's Mexico Institute in Washington D.C. Though current and former Pemex employees and their families may have better access to Covid-19 tests than the general population, "even in a privileged health-care system like Pemex's, they're still only testing a tiny percentage of the overall population," Wood said.

Industries such as mining, meat processing and oil production, which are often considered essential work, may be more vulnerable to Covid-19 outbreaks because of difficulties in making social distancing work. Of 4,134 employees tested at a JBS SA pork plant in Brazil starting in late May, 1,075 were positive through July 1, according to figures from an independent public prosecutor's office. Almost all recovered, and only 20 were off work due to Covid-19 as of early July, the prosecutor said.

The virus outbreak is intensifying in Mexico, where President Andres Manuel Lopez Obrador has prioritized reactivating the economy over enforcing strict lockdowns, a strategy that has drawn criticism.

Like other Latin American countries, Mexico has a high proportion of vulnerable people who must work to meet their basic needs and who live in crowded quarters, adding to the challenge of enforcing social distancing. Mexico has the second-lowest hospital bed count per inhabitant of any country in the Organization for Economic Co-operation and Development, just after India.

Lopez Obrador's home state of Tabasco, which contains the bulk of Mexico's onshore crude production and is a transit hub for oil platform workers, has the second-highest rate of confirmed Covid-19 cases per 100,000 inhabitants, just behind the capital Mexico City, according to government data.

"For Pemex workers, it matters if people are going out to the rigs or working in close proximity at oil fields onshore," said the Woodrow Wilson Center's Wood. "Then you really do have to take some preventative measures."