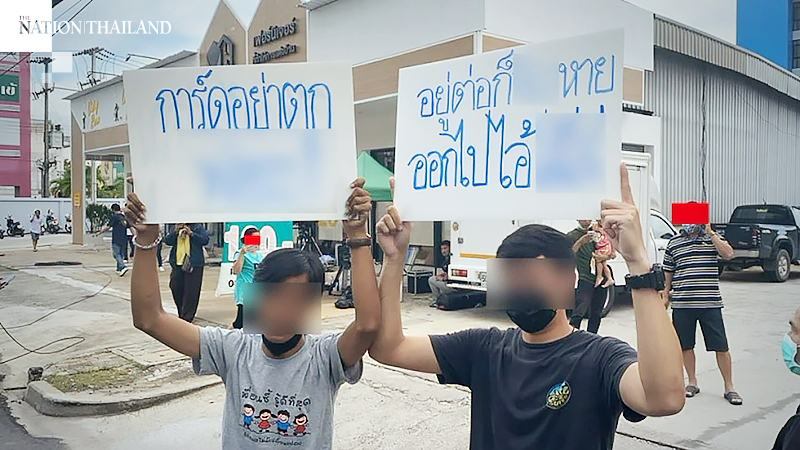 A man who was one of those holding up signs slamming Prime Minister Prayut Chan-o-cha for allowing “privileged” foreigners to enter Thailand and skip quarantine claims Rayong police pressed him with three charges and also injured him.

The footage of two men being arrested for holding signs with aggressive political messages near the D Varee Diva Central Hotel in Rayong province on Wednesday (July 15) while the premier was visiting has gone viral and prompted criticism online.

One of the men said on Facebook that he was charged for violating the emergency decree, interfering with security and trying to escape arrest, and also posted photographs of injuries caused to him by policemen.

The two men, reportedly members of a political network in the province, had previously put up a sign slamming the government sign near the Passione Shopping Destination, where an infected Egyptian soldier had roamed freely last week.

However, police took the sign down within 30 minutes, resulting in more frustration among those fighting the military’s prolonged hold on power.

The decision to allow Egyptian soldiers to get around freely without the mandatory 14-day isolation, and then finding one infected has brought hotels and other businesses in Rayong back to zero customers.

On Wednesday, visiting General Prayut promised the people of Rayong that his government will do its best to rebuild people’s confidence in safety at the province.

Meanwhile, some are defending the government and commending it for effectively controlling the Covid-19 outbreak.