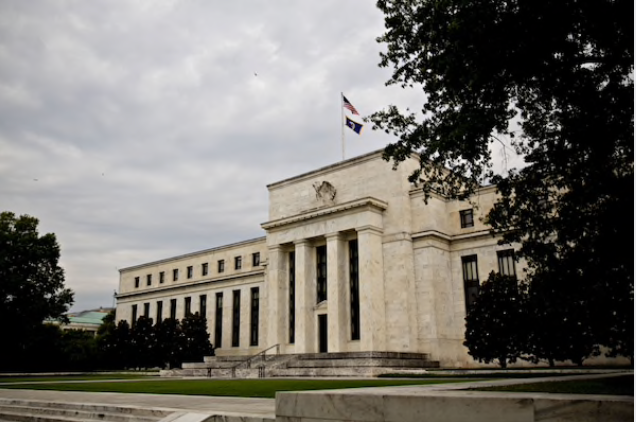 A top Federal Reserve official is calling on Americans to wear masks, saying the practice can have crucial benefits for the future of the economic recovery, even as masks fan political flames normally avoided by the central bank at all costs.

"We're confident that masks work, and if you want to reopen the economy faster, you want to get people back on planes and in stores," Robert Kaplan, president of the Federal Reserve Bank of Dallas, said in an interview with The Washington Post. "Part of my job, I believe, is to call it out."

Kaplan's comments are more forward-leaning than those of his central bank colleagues and come as masks have emerged as a hot-button political issue ranging from state to state - or in some cases, city to city - about how to stop the spread of the novel coronavirus pandemic.

The White House's message on mask-wearing has been inconsistent, and there is no firm federal policy on it. That confusion has left businesses large and small to take matters into their own hands and mandate their own policies.

Kaplan's mask-wearing call is significant, because Fed officials tend to avoid political or controversial issues that aren't immediately tied to employment, interest rates or financial markets. Yet his emphasis on masks further reveals how, for some members within the central bank, public health tools for controlling the pandemic are viewed in tandem with safeguarding the economy. Other Fed leaders, including Chair Jerome Powell, have said more generally that the virus will dictate the pace of the recovery.

Still, few have stepped forward to advocate mask-wearing so pointedly, for fear of inflaming political tensions, even as early signs of the recovery appear to be fizzling.

"Unless we get the virus under control, we see that growth is slowing and the rebound is less pronounced," Kaplan told The Post.

A growing number of academic and private-sector economists echo the idea that more people wearing masks will help fuel the recovery. Goldman Sachs economists concluded that a national mask mandate could save the economy from a 5% loss in gross domestic product and offset fears that persistent shutdowns would be drags on economic activity.

"The three most important policies for creating an economic recovery are public health, public health and public health," said Justin Wolfers, a professor of public policy and economics at the University of Michigan. "And the fourth and fifth are monetary and fiscal policy."

Masks are among the most efficient ways of containing the virus, Wolfers said, and a low-cost alternative to closing schools and public spaces. He pointed to the basic economic concept of opportunity costs, which would show that the economic and health consequences of not wearing a mask are extremely high - and far more expensive than the cost of wearing them.

Not all Americans are sold on the public health or economic benefits of wearing masks. Deep into the pandemic, President Donald Trump said wearing a mask should be voluntary, while raising doubts about whether face coverings limit the virus's spread. Especially in more conservative states, masks have been criticized as government overreach or an infringement on personal liberty. The sharp partisan divide is playing out within states, with conservative governors clashing with mayors in left-leaning cities over mask requirements.

This week, the governors of Alabama, Montana, Arkansas and Colorado issued statewide mask orders, meaning about half of all states now have a mandate in place. Meanwhile, Georgia Republican Gov. Brian Kemp signed an executive order on Wednesday banning cities from adopting their own mandates.

Masks may be among "the cheapest forms of stimulus ever designed by humans," said Austan Goolsbee, former chairman of the Council of Economic Advisers and a professor at the University of Chicago Booth School of Business. But widespread mask usage would also make it easier for the Fed's unprecedented emergency response to take root. Goolsbee recently co-wrote research on how peoples' basic fear of catching the virus is an ominous sign for the recovery.

"There's a fence around the effectiveness of monetary policy," Goolsbee said. "For the policy to be effective, people have to buy into it."

The reason mask-wearing can heal the economy is twofold, economists say: Public health officials say they contain the virus's spread and that masks are necessary to give people the confidence to safely go back to work, their favorite restaurant or the neighborhood mall. Strong consumer confidence fuels consumer spending, which typically drives about 70% of the U.S. economy.

There's also evidence that other countries with strong mask mandates are seeing a turnaround. For example, China's second-quarter GDP grew by 3.2% compared with a year ago, marking a rebound from earlier in the year when the pandemic tore through its economy.

When it comes to calling on Americans to wear masks, no other Fed leader has been as blunt as Kaplan. That includes Powell, who has declined to weigh in with specific advice for public health experts or lawmakers debating additional government support.

Instead, Powell talks about the recovery as dependent on the country's ability to contain the virus. In congressional hearings and public appearances, Powell insists that the cloud of uncertainty hanging over the economy is inextricably linked with the pandemic. He has also said that "a full recovery is unlikely until people are confident that it is safe to reengage in a broad range of activities."

"As the lockdown ends and the economy reopens, the first thing is that, you know, we need to do it in a sustainable way," Powell said in a June 17 hearing before the House Financial Services Committee. "Keep a distance, wash your hands, you know, wear a mask, that kind of thing. That's really going to help. That goes with faster reopening of the economy. That goes with a successful reopening."

Regional Fed chiefs and Fed board members have talked about mask-wearing, along with extensive coronavirus testing, as necessary to contain the virus and get the economy back on track.

"The more we can practice our great mitigation strategies - wearing masks, social distancing - you know, the more likely we are to be able to sustain our economic activity," said San Francisco Federal Reserve President Mary Daly during a Washington Post Live interview earlier this month.

And in mid-June, Cleveland Fed President Loretta Mester said that "better adherence to the guidelines on social distancing, mask wearing, and hygiene would help to control the virus's spread."

Fed leaders have led by example and worn masks in public, too. Powell wore one when he testified before the House Financial Services Committee on June 30. But beyond Kaplan, Fed leaders have not gone so far as to call on Americans to wear masks for the sake of the economy.

There are plenty of reasons for Powell to be cautious in his public statements. No recession in the modern era has been so entrenched within a public health crisis, and the Fed prefers to leave mask advocacy to epidemiologists and public health experts.

Plus, the Fed wants to preserve and protect its role as the government's top economic authority by avoiding the political fray and not telling other parts of government how to do their jobs. Masks, in particular, have become a partisan flash point within the country's response to the pandemic and the economic fallout.

As a surge in cases forced states such as Florida, California, Texas and Arizona to roll back their reopening plans, masks gained traction beyond the large coastal cities where they have been commonplace for months. Walmart, the world's biggest retailer, announced Wednesday that it will require masks in all stores, joining a list that now includes Target, CVS, Costco, Best Buy and Apple. The National Retail Federation also called upon all retailers this week to require customers to cover their faces.

The chaotic debate extends up to the White House, where Trump long refused to encourage Americans to wear masks and changed his tune only this week, telling CBS News that: "If it's necessary, I would urge [Americans] to wear a mask."

Administration officials insist the economy is back on track. White House forecasts for a rebound this year are often at odds with more measured expectations from the Fed.

As the Fed doubles down on its crisis response, Powell is not looking to raise tensions with the White House. Before the pandemic, Trump routinely attacked Powell for not doing enough to juice the economy. More recently, the president has dubbed the Fed chair his "most improved player."

"As this continues, the American people will use what they have learned about covid-19 and take the appropriate precautions, such as social distancing, facial coverings, and good hygiene, to protect the public health and return us to a growing economy," said White House spokesman Judd Deere.

That leaves Powell and the Fed in a fraught position, even if masks are increasingly viewed as key to ushering in a stronger economic recovery.

"At the time of peak 'Trump v. Powell,' people asked, 'does this threaten the Fed's independence?' " Goolsbee said. "The biggest problem with this is that when there comes a crisis, which hopefully there won't be, the Fed's credibility is tremendously important."

Scott Sumner, an expert on monetary policy at the Mercatus Center at George Mason University, said the Fed is skilled at talking around issues that don't fall squarely within its lane. Fed leaders wouldn't "go on a crusade for mask-wearing," Sumner said. But if there's agreement that the pandemic is driving the recession, "it's hard [for the Fed] to refrain from at least indirectly speaking out on that."

"There is the perception that policy is very dysfunctional right now, there's mixed messages coming out about whether people should wear masks, whether there's enough testing," Sumner said. "And that does spill over into the economy, which is the Fed's territory."

Kaplan agrees. He pointed to data from the Dallas Fed's Mobility and Engagement Index, which tracks the pandemic's impact on behavior through mobile data showing how much time people spend at home, how far they go when they leave the house, and so on. The index plummeted in mid-March as the country stayed home to avoid becoming infected, then began improving in late April.

More mobility means more economic activity - but it also means a higher risk of spreading the virus. Kaplan said he is convinced that masks could help keep people engaged in the economy without spurring such spikes in case counts.

That's a message he says falls directly under his job description.

"I think it's very critical, in the middle of a pandemic, that we are seen as apolitical," Kaplan said. "But on the other hand, we're willing to call out what we're seeing. . . . That also means I've got to be willing to call out drivers that may not have a lot to do with monetary policy."