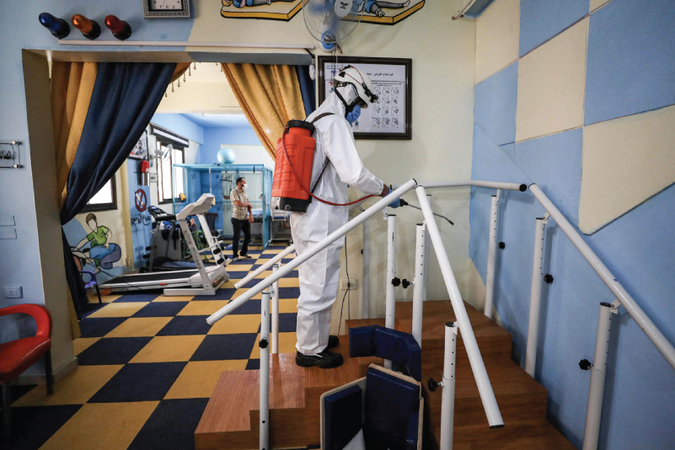 BEIRUT -The Syrian government is stepping up efforts to track the novel coronavirus and promote public health measures that have been in place elsewhere for months, after the number of daily reported cases began increasing in recent weeks.

The tally of reported infections in government-held areas of Syria remains very low, with fewer than 500 registered cases and at least 25 deaths, mostly in the capital, Damascus, and surrounding countryside. But a recent uptick in cases has prompted alarm among citizens and officials alike, especially as small clusters have started appearing among medical workers.

Since the start of the pandemic, Syria has reported far fewer cases than other Middle Eastern countries, prompting widespread skepticism about whether the notoriously opaque government was being candid. Reports that health-care workers have contracted the virus have further increased suspicions that the disease is more prevalent in the general population than officially acknowledged.

On Thursday, state-run media announced that the director of Al-Mujtahid Hospital, one of Syria's largest, had tested positive for the virus. In the past week, the Syrian Arab Red Crescent reported that seven of its volunteers had contracted the virus.

When three coronavirus cases were found in June among health-care staff in southwest Syria, medical students complained on the National Union of Syrian Students' Facebook page. "I think it's time for us medical students to stop our clinical rounds and being exposed to danger daily," one student commented. "I mean, our shifts are at the hospitals that have cases and the students are [stacked] atop each other and there are no preventive measures being applied, is that not enough?"

Government efforts to spread awareness about the virus and track its spread have picked up recently. There are now four testing laboratories in areas under government control, and a website has been set up to monitor cases across the country. Facebook pages and groups run by government agencies and private organizations have started updating the population.

Meanwhile, official voices such as the industry minister and public universities are now calling on citizens to take precautions. After two judges tested positive for the virus Monday, Justice Minister Hisham al-Shaar emphasized the importance of social distancing and wearing face masks and gloves. That type of official messaging had been absent in the past few months.

Syria adopted preventive measures later than most other countries in the region and began lifting them early. The government imposed a lockdown for two months until late May, banning intercity travel and announcing a night curfew. But footage from that period showed large crowds in Damascus's famous Souq al-Hamidiyah market, crowding its covered streets, not a mask in sight. "There is no corona in Syria," many joked dismissively.

Even now, media reports continue to show people out in public without masks or practicing social distancing. According to one Damascus resident, masks are too expensive, with 100 masks costing a month's salary for an average government employee.

"They have significant economic problems in the country, and there's a limit to how much they can enforce the lockdown," said Doctor Rana Hajjeh, the World Health Organization's director of program management, who led a mission this past week to Syria in support of its response to the outbreak. "What we have seen at this point, for example, is that now they've started lifting the restrictions, even though the restrictions were not very strict, the people have just gone out and there's complete disregard of any prevention measures, masks, social distancing, all of that."

Getting the public to take the threat more seriously is one of the biggest difficulties, Hajjeh said.

For the most part, concerns about the coronavirus have taken a back seat in Syria, where people are overwhelmingly focused on a severe economic crisis that has seen the currency, in the span of a few days last month, drastically decline to record lows against the dollar. A fresh set of U.S. sanctions, aimed at squeezing President Bashar Assad and targeting anyone who helps his government, have dealt another blow to an economy already decimated by years of war and financial problems in neighboring Lebanon.

Fares Shehabi, a chairman of the Syrian Federation of Industry, warned in April about the additional economic damage a lockdown could cause. He wrote in a social media post: "We hope that the isolation and shutting down of low-income sector procedures do not lead to choosing between risking death by corona or death by hunger! That's when things will get out of control!"

He noted that clothing stores are plentiful in Syria and have no lines outside, meaning social distancing could be maintained. Closing them, he said, led to the shuttering of workshops and factories, leaving thousands out of jobs and forcing businesses to accrue losses.

The country has been in crisis for so long that it is difficult for most to remember a time of normalcy. So when the coronavirus hit the world, many Syrians took it in stride. Some even took it too lightly.

In a television interview in March, Syrian Health Minister Nizar Yazigi said there were no cases yet and that the government was taking precautions. Asked what reassuring message he would like to give Syrians, he responded, "I would like to say that, thanks to Allah, the Syrian Arab Army has cleansed a lot of the germs on Syria's lands."

After nine years of war, Syria has been left with devastated medical facilities and depleted ranks of health-care workers. Nearly half of the health facilities are out of service, medical equipment is in short supply and much of the medical workforce has left the country.

The country has been unable to rely on some of its traditional allies for help. Iran and China have been preoccupied with their own outbreaks, though China did send some aid. An unintentionally comical report showed two small boxes of aid from China being offloaded from a plane in April. In a news conference, two dozen Syrian and Chinese officials and airport workers stood over the shipment.

Russia, one of Assad's most important backers, sent aid that included 50 respirators, 10,000 testing kits and 1,000 protective suits. An anticipated second batch has yet to be sent.

Meanwhile, humanitarian groups have had to get extensive approvals to provide assistance, which aid workers say has limited supplies.

"Bureaucracy is absolutely one of the most significant challenges in Syria when it comes to delivering aid," said one humanitarian worker who spoke on the condition of anonymity because of the delicate relationship with the government. "This has always been problematic, but right now with covid-19, when time is of the essence, too much aid gets stuck in an enormous bureaucratic quagmire and is not reaching people fast enough."