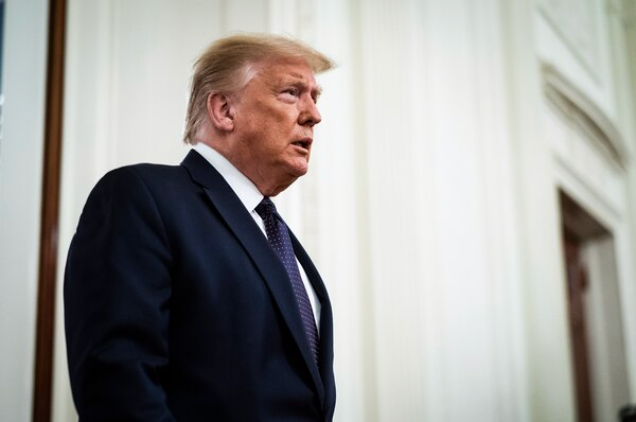 President Donald Trump declined to say whether he will accept the results of the November election, claiming without evidence that mail-in voting due to the coronavirus pandemic could "rig" the outcome.

In a wide-ranging interview with "Fox News Sunday" host Chris Wallace, the president also continued to play down the severity of the coronavirus crisis in the country, declined to say whether he is offended by the Confederate flag and dismissed polls showing him trailing former vice president Joe Biden by a significant margin.

The interview comes as the 2020 campaign has been upended by the pandemic, which has claimed more than 137,000 lives in the United States. Most in-person events have been canceled, and both political parties are planning to hold smaller-scale conventions to limit the spread of the virus.

Several states switched to primarily vote-by-mail primaries earlier this year, and the U.S. Postal Service is bracing for an onslaught of mail-in ballots this fall as states and cities seek alternatives to in-person voting.

In the "Fox News Sunday" interview, Wallace asked Trump whether he considers himself a "gracious" loser.

Trump replied that he doesn't like to lose, then added: "It depends. I think mail-in voting is going to rig the election. I really do." Trump's comment echoed unfounded claims he has made in recent weeks that mail-in voting is susceptible to widespread fraud.

"Are you suggesting that you might not accept the results of the election?" Wallace asked.

Trump responded, "No. I have to see."

Later in the interview, pressed on whether he will accept the results of the November election, Trump again declined to say.

During the final presidential debate of the 2016 campaign - which was moderated by Wallace - Trump similarly suggested that he might consider the November election results illegitimate because the process is rigged.

"I will keep you in suspense," Trump said at the time. Democratic presidential nominee Hillary Clinton described Trump's answer as "horrifying," saying he was "talking down our democracy."

Elections officials are anticipating a high turnout in November, along with a dramatic increase in voters who choose to mail their ballots instead of risking exposure to the coronavirus at polling places.

Biden's campaign responded to Trump's remarks in a statement Sunday morning."The American people will decide this election," Biden spokesman Andrew Bates said. "And the United States government is perfectly capable of escorting trespassers out of the White House."

On "Fox News Sunday," Trump played down the recent spike in U.S. coronavirus cases, arguing that "many of those cases shouldn't even be cases."

"Many of those cases are young people that would heal in a day," he claimed. "They have the sniffles and we put it down as a test."

More than 20 states are reporting seven-day averages in coronavirus-related deaths higher than at the end of June, underscoring the turnaround since May and June, when deaths declined nationally.

Wallace pressed Trump on the issue, noting that there are currently about 6,000 cases in the entire European Union. "Is it possible that they don't have the virus as badly as we do?" he asked.

"It's possible that they don't test, that's what's possible," Trump replied. "We find cases, and many of those cases heal automatically."

The president also defended his oft-made prediction that the virus will "disappear" one day.

On the issue of the Confederate flag, a symbol that for many represents the country's racist past and history of slavery, the president declined to offer his own feelings.

Amid a nationwide debate over Confederate monuments and symbols, Trump has previously said he views the flag a matter of freedom of speech. He went further in the "Fox News Sunday" interview, appearing to equate the flying of the Confederate flag to the Black Lives Matter movement against systemic racism and police brutality.

"So you're not offended by it?" Wallace asked Trump of the flag.

Amid a raft of polls showing him trailing Biden, Trump has remained defiant, and in the interview with Wallace, he again dismissed the survey results.

"I'm not losing, because those are fake polls," he said.