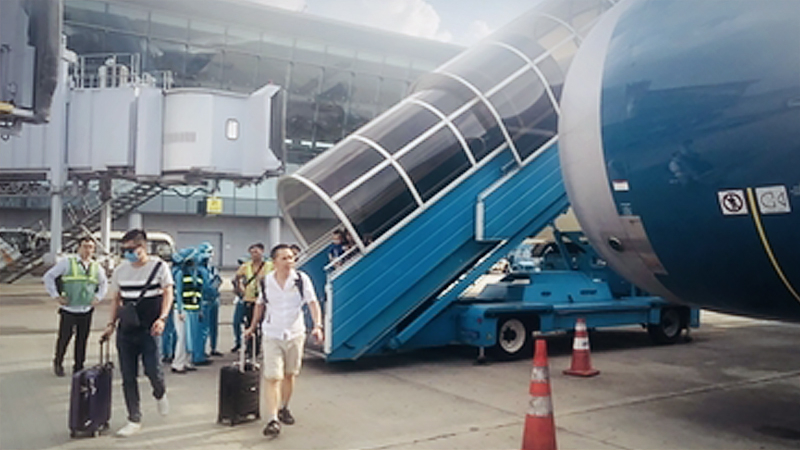 Passengers arrive at Tan Son Nhat Airport in HCM City. Due to the current difficulties of local aviation industry, no new airline is allowed to open until 2022 .— Photo VNS Thu Giang

No new airlines will be allowed to open in Viet Nam until 2022 at the earliest, Deputy Prime Minister Trinh Dinh Dung has announced.

The Deputy PM says until the aviation industry has fully recovered from the fall-out of the COVID-19 pandemic, no new airlines will be considered.

His ruling conforms proposals submitted by the Ministry of Transport (MoT) in May.

The announcement will come as a blow to a number of new airlines that were hoping to take to the skies soon.

With the ministry’s decision, these airlines must continue to wait for permits.

Minister of Transport Nguyen Van The said: "In the most optimistic scenario, only in 2022, the local aviation market could reach the result it did in 2019."

According to the ministry, Viet Nam has 214 aircraft, but right now less than half are being used.

To ensure the State management of aviation to develop sustainably in the future, the MoT suggested focusing on restoring the domestic air travel and solve the difficulties for the local airlines.

According to the Government Office, Dung assigned the MoT to take responsibility in ensuring the sustainable development of the aviation industry. He also assigned the Ministry of Planning and Investment with the function of appraising investment policy of the Kite Air project to report to the Prime Minister in the future.

Earlier this year, Vietravel Airlines was granted the license to become the 6th commercial airline of Viet Nam. It is applying for a flight permit. — VNS