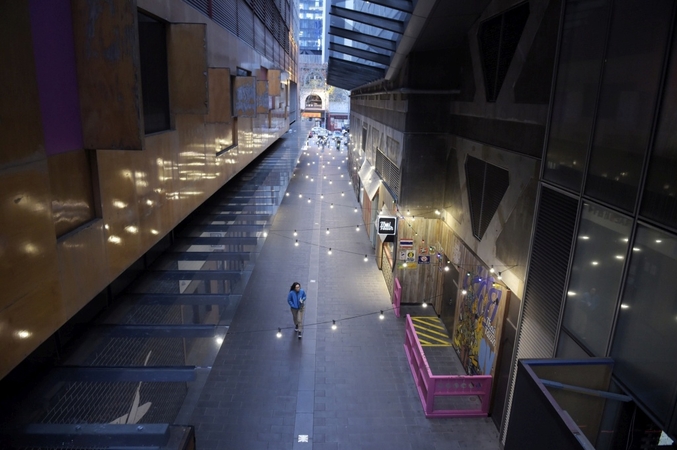 A woman walks along a deserted lane in the Queen Victoria Village precinct in Melbourne on July 16, 2020. MUST CREDIT: Bloomberg photo by Carla Gottgens. Photo by: Carla Gottgens — Bloomberg Location: Melbourne, Australia

Australia will pump a further AU$20 billion ($14 billion) into supporting jobs, as central bank chief Philip Lowe warned of a drawn out recovery while the health crisis remains.

The government's signature wage subsidy program, which is currently supporting about 3.5 million workers, will be extended by six months until the end of March, albeit at a lower rate, Prime Minister Scott Morrison said Tuesday. A supplement to unemployment benefits will also be extended, again at a lower rate.

"I welcome the extension and the tailoring of both those measures," Lowe said in response to a question after a speech Tuesday. "They're both providing important support to households and businesses and they're both playing an important role in reducing the costly scarring to the economy."

After initial success in containing the virus, Australia is battling a second wave in the state of Victoria that has forced around 5 million people back into lockdown. The shutdown of the nation's second-biggest city, which contributes about one-quarter of GDP, threatens to derail the economic recovery.

Governor Lowe described the situation of Victoria as "very concerning" and said the Reserve Bank of Australia is watching it "very carefully." The fluidity of the situation means the RBA hasn't worked through the effect on the forecasts, he said, but that the full set of updated numbers are due in August.

The treasurer will deliver a broader economic and fiscal update Thursday, where it is expected to unveil the biggest budget blowout since World War II. The extension of the wage subsidies and unemployment payments will allay fears of a fiscal cliff emerging whereby struggling firms and households are suddenly left without cash.

Lowe warned about the risks of a prolonged crisis from the Covid-19 pandemic, noting that "the longer it lasts and the more uncertain things are, the harder it is to smooth out."

"The path ahead is expected to be bumpy and there are some major cross-currents in the labor market at the moment," he said. The only way that it will be ameliorated will be if global scientists can come up with a vaccine.

Lowe pushed back against negative interest rates and currency intervention in the speech, echoing points made in minutes from the RBA's July policy meeting released earlier Tuesday. The governor also argued against monetary financing of government debt Down Under.

"There is no free lunch," Lowe said of central bank financing in the text of the speech, referring to proposals from economists including ex-Federal Reserve No. 2 Stanley Fischer. "This proposal is only relevant to the situation where high government debt constrains the ability of the government to provide necessary fiscal stimulus financed through the normal channels. Clearly, it is not relevant to the situation we face in Australia."

The central bank in March cut interest rates to near zero, set a target for the three-year yield of 0.25% and began buying government bonds to soothe dislocated markets; it hasn't had to purchase securities since early May.

Asked about the level at which the RBA might return to bond buying, Lowe declined to put an exact figure on it.

"I hope the credibility of that target means that we can continue to achieve it without further purchases of bonds, but if we need to, we will," he said. "We're not going to set a specific number, if it goes above 30 or 32 then we will jump into the market. It's really a judgment about what market conditions are."

The minutes said that the board reviewed the emergency measures and decided there was no need to adjust them in the current environment. Yet, members agreed "to continue to assess the evolving situation in Australia and did not rule out adjusting the current package if circumstances warranted," it said.

The bank remains wary about the nature and speed of the economic recovery, saying it "remained highly uncertain" and, as in other countries, would depend in large part upon the containment of the virus.

Lowe, in responding to a question, cited the International Monetary Fund and said, "the biggest policy mistake to make at the moment would be to withdraw the support too early."

The JobKeeper has seen the government pay wage subsidies of AU$1,500 every two weeks per employee to help struggling firms keep people in work.

The program will have two tiers from the end of September to better reflect the hours people work. The payment will initially fall to AU$1,200 for full-time workers, and AU$750 for those working less than 20 hours per week. From January to the end of March, it will be cut again to AU$1,000 and AU$650.

By the March quarter of 2021, about 1 million people will still be on the JobKeeper program, according to Australia's Treasurer, Josh Frydenberg.

The supplement to the JobSeeker unemployment benefit will be cut to AU$250 from AU$550 in September and will run until the end of the year.