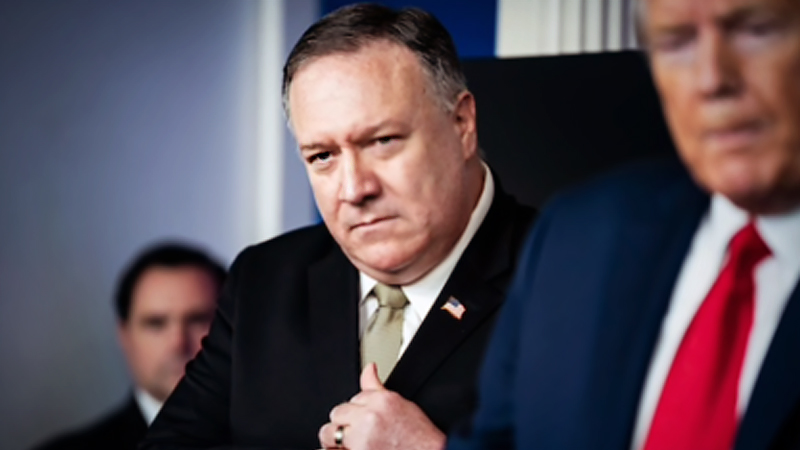 LONDON - Secretary of State Mike Pompeo showered Britain with praise Tuesday for taking a harder line on a "disgraceful" China, a notably warmer tone toward his hosts than he struck during a visit in January.

"I wanted to take this opportunity to congratulate the British government for its principled responses to these challenges," Pompeo told reporters. Britain announced Monday it would end an extradition treaty with Hong Kong and extend an arms embargo to the territory, and last week reversed its position toward the Chinese telecommunications giant Huawei.

Pompeo's January visit was far chillier. The top U.S. diplomat effectively accused the British government of jeopardizing a long-standing intelligence agreement by allowing Huawei, seen as close to the Chinese state, to be a part of Britain's 5G network.

But much has changed in half a year. Britain, like the United States, has been one of the countries hit hardest by the coronavirus pandemic that began in China. It finds itself increasingly at odds with Beijing on several fronts, including not only Huawei and the new national security law that tightens Beijing's grip on Hong Kong but also growing public outrage about human rights.

British leaders were a receptive audience for the secretary of state, who chastises the Chinese Communist Party almost daily and plans to give a speech Friday on "Communist China and the future of the free world."

Pompeo met privately with Prime Minister Boris Johnson and Foreign Secretary Dominic Raab and spoke to hawkish members of the governing Conservative Party at a roundtable hosted by the Henry Jackson Society, a London-based think tank that's critical of China.

He was scheduled later to meet with Chris Patten, the last British governor of Hong Kong, and Nathan Law, a pro-democracy politician from Hong Kong.

Pompeo and Raab spoke to reporters at Lancaster House, a dazzling neoclassical mansion in London's West End. When Raab was asked if the United States had pressured Britain to reject Huawei, Pompeo responded.

Raab said he didn't "think there is any question of strong-arming." He and Pompeo "always have constructive conversations," he said.

Johnson, whose government hopes to secure a trade deal with the United States that could shape its post-European Union economic future, told reporters Monday that he did not want to be "a knee-jerk Sinophobe on every issue, somebody who is automatically anti-China."

But the British leader also said there were real concerns about China, and his government had to respond. Britain announced the suspension of the extradition treaty and the extensions of the arms embargo Monday. The week before, Britain announced it would suspend new deployments of Huawei equipment to its high-speed 5G network, in line with long-standing U.S. requests that allies isolate the Chinese company.

China has repeatedly reprimanded Britain for its actions. In a statement Tuesday, an unnamed spokesman for the Chinese Embassy in London warned Britain "will bear the consequences if it insists on going down the wrong road."

"China has never interfered in UK's internal affairs," Liu Xiaoming, the Chinese ambassador to Britain, wrote on Twitter. "The UK should do the same to China. Otherwise it must bear the consequences."

But the moves enjoyed broad support among British politicians. Conservative Party lawmaker Tobias Ellwood, who met with Pompeo on Tuesday, told the House of Commons on Monday that Britain needed a "strategic overhaul of our foreign policy in relation to China."

At the Henry Jackson Society, Pompeo described success against China as a long game that would stretch beyond the Trump administration, according to a person in the room. That outlook is necessary, the person said, because Xi sees it as a multigenerational effort. There was a general sense of anxiety about the need for an international coalition to confront China, the person said.

Lawmakers also asked Pompeo about Africa and how the United States and Britain can "beat" the Chinese there. China has cultivated bilateral relationships in Africa to secure its energy needs.

Some U.S. officials appeared relieved by the new stance in Britain. A pair of conservative-leaning British newspapers reported that the Henry Jackson Society meeting was intended to ensure Johnson keeps a hard line on China.