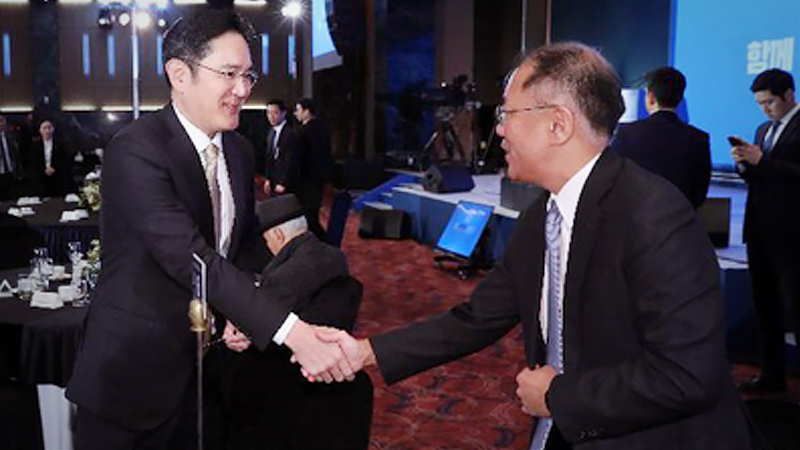 The company’s de facto leaders, Lee Jae-yong of Samsung and Chung Euisun of Hyundai Motor, met officially on Tuesday for the second time this year to discuss future mobility technologies at Hyundai and Kia Motors’ research and development center located in Namyang, Gyeonggi Province, according to the firms.

Built in 1995, the center is the largest R&D facility for automobile technologies in the country, and employs about 14,000 engineers.

The executives of Samsung were briefed on Hyundai Motor’s future technologies and products related to urban air mobility and robotics, according to the companies. The Samsung executives also test-drove an autonomous car and a hydrogen electric vehicle under development by Hyundai during a tour of the R&D facility.

Lee has been preparing for Samsung’s expansion into the automotive parts sector as vehicles are increasingly going electric and smart. The acquisition of US-based infotainment business Harman International in 2016 was part of Samsung’s plan for the auto parts business.

“Including the Harman acquisition, Lee has been making efforts to strengthen Samsung’s automotive parts business, which has a portfolio ranging from automotive semiconductors, image sensors, displays to audio systems,” a Samsung official said.

Samsung is also enhancing 5G and 6G telecommunications technologies as well as artificial intelligence capabilities that will be applied to autonomous driving, the official explained.

An industry insider said, “The latest meeting between Samsung and Hyundai Motor indicates that the two groups’ cooperation wouldn’t be limited to electric car batteries.

“It could mean more than that, probably on building future cars and developing mobility solutions.”

Hyundai’s Chung has been active in meeting the chiefs of other conglomerates recently, including SK Group Chairman Chey Tae-won and LG Corp. Chairman Koo Kwang-mo. This was seen as evidence of a strong push by Hyundai to roll out 1 million electric cars in 2025 as part of its “New Deal” plan.