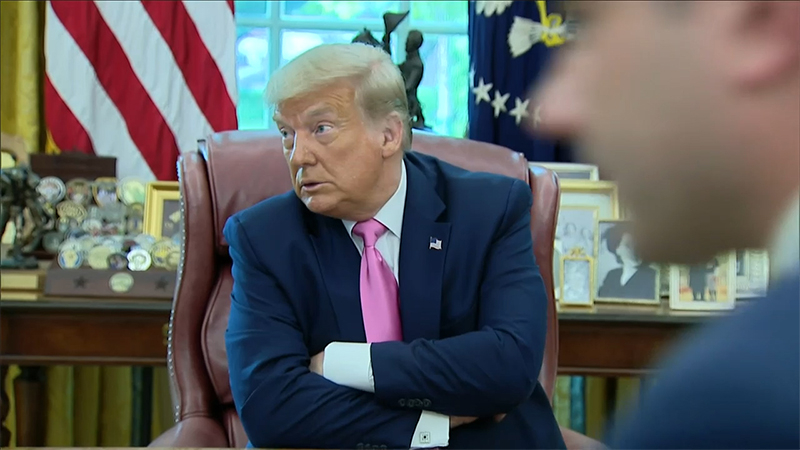 Several lawmakers speculated openly that they might be unable to make any deal with Democrats at all, suggesting the possible need for a stand-alone extension of unemployment benefits that expire at the end of this month.

Lawmakers and aides emphasized that their intention was to negotiate and pass a deal with Democrats in the next several weeks. Senate Majority Leader Mitch McConnell, R-Ky., is readying a bill as a starting point for talks that he had hoped to release as early as Wednesday, though that timeline slipped to Thursday as internal negotiations bogged down.

In one sign of progress, Treasury Secretary Steven Mnuchin and White House Chief of Staff Mark Meadows announced an agreement with key senators late Wednesday on certain spending priorities in the bill. As part of this, senators agreed to $16 billion for testing and tracing - down from $25 billion they had initially sought - after administration officials argued that $9 billion remained unspent in a federal fund. Administration officials had initially sought to zero out the testing funding.

But the internal divisions over multiple other issues, from the payroll tax cut to whether a new bill is even necessary, led to pessimistic forecasts from some.

"I'd say it's gonna be tough," said Sen. Kevin Cramer, R-N.D. "There are some over here that think we benefit from doing nothing because people don't want to spend any more money."

Cramer said he thought it was possible that even if they succeed in overcoming their internal differences, Republicans would be unable to bridge the "pretty big gap" with Democrats, who've embraced a $3 trillion bill containing multiple priorities Republicans oppose, such as a large package of aid for cities and states, among other things.

Treasury Secretary Steven Mnuchin and other administration officials insist they must act by the end of next week because enhanced unemployment benefits are set to expire for millions of Americans. McConnell has dismissed that timeline as unrealistic but is working to unveil his bill so that negotiations with Democrats can commence.

Sen. Rob Portman, R-Ohio, said lawmakers may consider a two-month extension in emergency unemployment benefits at a level below the current $600-per-week subsidy if they are unable to come to an agreement on the broader $1 trillion stimulus package. Portman suggested the extension could be used to give lawmakers time to create an unemployment system more closely tied to a worker's prior earnings.

"I think we should do the whole thing, but if we can't get it all done by next week we cannot allow there to be a cliff in unemployment insurance given that we're still at about 11 percent unemployment," Portman said. "I think we need to do something and the interim period we can have a compromise."

The enhanced benefits were passed as part of the Cares Act in March, one of four pieces of legislation Congress approved nearly unanimously at the outset of the pandemic. Those laws injected nearly $3 trillion into the economy but many of their benefits, such as stimulus checks and small business loans, have been spent. For some, that spirit of urgency has waned, while others are simply divided on what are the best steps to take next.

"There's not going to be unanimity," said Sen. John Cornyn, R-Texas. "So, as you know it doesn't take unanimity pass a bill."

Senate Republicans have a 53-47 majority in the Senate, and there's little chance the legislation they are currently crafting would be able to secure the 60 votes needed to proceed to a final vote. But emerging from the discussions with a formal plan would give them a starting point to begin negotiations with House Democrats.

Whether to include a payroll tax cut remained a critical outstanding question Wednesday, a day after Mnuchin and White House Chief of Staff Mark Meadows encountered a barrage of criticism on the issue during a private lunch with GOP senators on Capitol Hill. A handful of other items remained unsettled, too, but the contours of much of the legislation has come into focus over the past several days.

McConnell has said it would include $105 billion for education. Of that money, $70 billion will go to elementary and secondary schools, according to Sen. Roy Blunt, R-Mo., a senior member of the Appropriations Committee. The $70 billion will be split into two pots, with half of it going to all schools through grants, and the other half reserved for schools that submit a reopening plan and can then use the funds for costs associated with reopening, according to a person familiar with the proposal who spoke on condition of anonymity to describe it.

Reopening schools has become a major focus for President Donald Trump that's sparked a heated debate nationwide with coronavirus cases spiking and some major school districts announcing plans to start the fall with virtual learning only. In Florida, the teachers' union sued the governor over his plans to reopen schools.

The GOP plan is not expected to include much if any new state and local aid, but will allow state and local leaders flexibility with how they spend the $150 billion already allocated in the Cares Act in March. It will include around $100 billion in additional funding for the small-business Paycheck Protection Program, targeted for businesses that can demonstrate need.

The GOP legislation will also include about $25 billion for states to conduct coronavirus testing and tracing, and billions more for the Centers for Disease Control and Prevention and the National Institutes of Health. The Trump administration had initially sought to block this spending, but backed down under pressure from Blunt and other key senators.

Republicans also want to include new legal protections for businesses that would make it harder for employees to sue their employers if they become sick.

"If the parameters stayed the same, we could do it really quickly," Thune said, although aides said the issue remained unsettled.

A major area dividing lawmakers was the question of what to do with the expiring unemployment benefits. Some Republicans want to cut the $600-per-week benefit approved by Congress in March to around $200-per-week.

Those benefits are set to expire for between 20 million and 30 million people by the end of the month.

At a closed-door lunch on Wednesday, GOP senators were shown polling from a group called the Foundation for Government Accountability, invited by Sen. Mike Lee, R-Utah, suggesting public opposition to extending the enhanced unemployment benefit at its current level.

At a White House press briefing on Tuesday, Trump floated changing the unemployment benefits so they amount to about 70% of a typical worker's income while he or she was employed - which translates into cutting the extra benefit to about $175-per-week, according to Ernie Tedeschi, who served as an economist in the Treasury Department under the Obama administration. The federal unemployment benefit comes on top of existing state unemployment benefits that vary widely.

"If they lowered it to $200 a week, 30 million workers would wake up with a pay cut from a third to a half overnight," Tedeschi said. "While $200 is marginally better than full expiration, the U.S. would still take a major economic hit from this summer and this fall as a result from it."

U.S. Gross Domestic Product would be 1.33 percentage points smaller at the end of the year under Trump's proposal than if extended at $600-per-week for the rest of the year, Tedeschi said, as well as more than 1 million fewer jobs because of the contraction in spending.

Republican lawmakers have also looked at a short-term unemployment extension as part of the broader package, rather than a separate measure, according to one person aware of internal planning granted anonymity to discuss private conversations. If included in the broader stimulus package, that measure could include a two-month extension of unemployment only slightly below current rates before fading out over time.

If the payroll tax cut is included, it is expected to defer rather than eliminate the 7.65 percent tax employees pay, which goes to support the Social Security and Medicare programs. That would allow the proposal to technically not add to the cost of the bill. Workers might have to repay the money at a later date, but Congress could also decide to waive that entirely.

Trump views the payroll tax cut as a good way to stimulate the economy and help workers, but GOP senators have raised multiple objections, including that it only benefits those with jobs, the benefit will not be immediately felt, and it will drain the already shaky Medicare and Social Security trust funds.