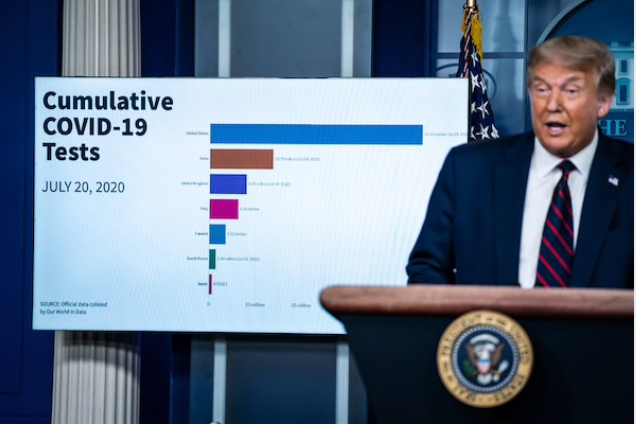 President Donald Trump speaks during a coronavirus briefing in the James S. Brady Briefing Room at the White House on Tuesday. MUST CREDIT: Washington Post photo by Jabin Botsford

As part of his annual physical two years earlier, the president had taken the Montreal Cognitive Assessment - a 10-minute test designed to detect mild cognitive impairment such as the onset of dementia - and he believed he could weaponize his performance against Biden, the presumptive Democratic presidential nominee.

During a private campaign meeting in the Cabinet Room in early June, Trump brought up the test unprompted. In an extended riff, he talked about how well he had done - boasting that he'd been able to remember five different words, in order - and suggested challenging Biden to take the assessment, saying he was certain the former vice president would not fare as well.

Since then, the president has been speaking about the test publicly, telling Fox News's Sean Hannity in a July 9 phone interview that he'd "aced it," and again on Sunday, when he told the network's Chris Wallace that he doubts Biden could answer all of the questions. On Wednesday evening, in another Fox News interview, Trump couldn't resist revisiting what he said was the hardest part of the test - repeating the five words, in order.

Trump said he was first asked to repeat a set of words - "person," "woman," "man," "camera," "TV," he said, offering a hypothetical example - and then, later in the assessment after some time had elapsed, he was again asked whether he remembered those same words, in order.

"And they say. . . 'Go back to that question, and repeat them. Can you do it?' " Trump said, mimicking the doctors administering the exam. "And you go, 'Person, woman, man, camera, TV.' They say, 'That's amazing. How did you do that?' I do it because I have, like, a good memory, because I'm cognitively there."

But medical and public health experts stress that the cognitive exam is not what Trump seems to think it is - an indicator of IQ or a cudgel to be wielded against a political opponent like a debate challenge.

Experts say the president's fixation on the Montreal Cognitive Assessment - or MoCA, as it is sometimes called - is particularly puzzling because the test is normally administered only if someone is concerned that they or their loved ones may be experiencing dementia or other cognitive decline. Getting a perfect score - as Trump has repeatedly claimed he did - merely signifies that the test-taker probably does not have a cognitive impairment as measured by the exam.

"It's not meant to measure IQ or intellectual skill in anyway," said Ziad Nasreddine, the neurologist who created the test. "If someone performs well, what it means is they can be ruled out for cognitive impairment that comes with diseases like Alzheimer's, stroke or multiple sclerosis. That's it."

Nasreddine continued: "The reason most people take the test is they or others start noticing mental decline. They forgot where they parked the car, can't remember what groceries to buy by the time they get to the store. They keep forgetting to take their medication."

The MoCA is often administered at memory clinics or by primary care physicians or geriatricians. Trump's was administered at Walter Reed National Military Medical Center in early 2018 by Navy Rear Adm. Ronny Jackson, then the White House's top physician, who is now a Republican candidate for Congress in Texas.

At a news conference that year discussing Trump's physical, Jackson described Trump as "mentally very, very sharp" and "very intact" and said he would not have given Trump the cognitive assessment but that the president himself requested it. At the time, Trump was reeling from the fallout of Michael Wolff's book, "Fire and Fury" - a best-selling account of life inside the White House that depicted a maelstrom of chaos and incompetence - and was eager to demonstrate that he was, as he had claimed on Twitter, "a very stable genius."

Though Trump this month said he had taken the test "very recently," it was unclear whether he was referring to his 2018 physical or has taken the MoCA a second time. The White House declined to comment.

The questions are designed to evaluate short-term memory, visuospatial abilities, executive functions, language and orientation. They often include being able to draw a clock with the hands set at a certain time, to recall a list of words and to repeat phrases such as, "The cat always hid under the couch when dogs were in the room," according to one sample test.

Frequently, patients are asked to look at three drawings of animals and identify them - a lion, camel and rhinoceros, for instance. "We don't use cats and dogs because they're too common and easy," Nasreddine said.

Patients receive a score of zero to 30 points. A score of 26 or higher is considered normal, and the average score is 27, Nasreddine said, with about 10 percent of patients receiving 30 out of 30 - as Trump has bragged he did.

But because many people who take the test are suspected to have mild dementia, the sample pool is dominated by people with cognitive problems, making a perfect score less likely, experts said.

Health experts also say that the MoCA focuses on cognitive impairment and is not a psychological exam, so scoring well on it does not automatically rule out other mental health problems, such depression, mania, narcissistic personality disorder, schizophrenia and other disorders.

In the "Fox News Sunday" interview, Wallace, who said he had taken the test online, was notably skeptical that Trump's alleged top-notch performance on the MoCA was particularly meaningful.

"Well, it's not the hardest test," Wallace said. "They have a picture and it says, 'What's that?' And it's an elephant."

"Well, one of them was count back from 100 by seven," Wallace quipped, before deadpanning the answer: "Ninety-three."

The exchange wound down when Trump declared: "I'll guarantee you that Joe Biden could not answer those questions."

Though Trump and his team have labored to raise questions about Biden's fitness for office, in recent weeks those attacks have boomeranged on Trump. After he struggled with a glass of water - using two hands to lift it to his mouth - and walked haltingly down a ramp at the U.S. Military Academy at West Point, where delivered the commencement address in June, Trump's own fitness became part of the cable news narrative.

The Lincoln Project, an anti-Trump group, launched a 45-second ad echoing those themes. "The most powerful office in the world needs more than a weak, unfit, shaky president," the ad's narrator intones.

Recent surveys show that voters believe Biden's mental acuity either matches or exceeds Trump's. In a Fox News poll released Sunday, registered voters said by an eight-point margin that Biden has the mental soundness to serve effectively as president, while voters doubted Trump's mental soundness by eight points. And a Washington Post-ABC News poll conducted at the end of May found that 46 percent of voters thought Trump had the "mental sharpness" necessary to serve effectively as president, compared with 49 percent who thought Biden did.

T.J. Ducklo, a Biden campaign spokesman, dismissed Trump's challenge, saying, "The only testing Donald Trump should be focused on is the kind we need to get the covid-19 crisis under control."

"The thousands of Americans who are contracting this virus each day don't care whether or not the president can identify a photo of an elephant - they care their federal government is doing everything possible to keep them safe and right now, under this president, that is not happening," Ducklo said in a statement.

Concerns about the health of America's leaders are a long-standing phenomenon, said Jeffrey Engel, director of Southern Methodist University's Center for Presidential History and author of "When Life Strikes the President: Scandal, Death, and Illness in the White House."

Franklin D. Roosevelt, for instance, was physically impaired by polio, which he kept largely hidden from public view. In the final days of Richard M. Nixon's presidency, Defense Secretary James Schlesinger was so concerned about the president's mental state that he told military commanders that if the president gave any nuclear orders, to first check with him or Henry Kissinger, Nixon's national security adviser and secretary of state, before executing them.

And during his last years in the White House, Ronald Reagan's aides also grew concerned about his cognitive abilities. Reagan was officially diagnosed with Alzheimer's five years after leaving office.

But a sitting president bragging about his test results for cognitive impairment, and taunting his political opponent to take a similar exam, is unprecedented, Engel said.

"Among presidential historians, we all trained in graduate school to never to use the word 'unprecedented' because we're told that there's always a precedent," Engel said. "But the truth is Trump does any number of things every week that are unprecedented, including the boasting of things that have no basis in fact. This boast that a cognitive test somehow is a sign of his intelligence? You can chalk this up as one of them."

He added that Trump's entire obsession with the MoCA is "incredibly bizarre."

"This is a basic cognition test that any reasonable adult should be able to pass," Engel said. "I don't understand why he's bragging about it, but there are many things this president does that are hard to understand."