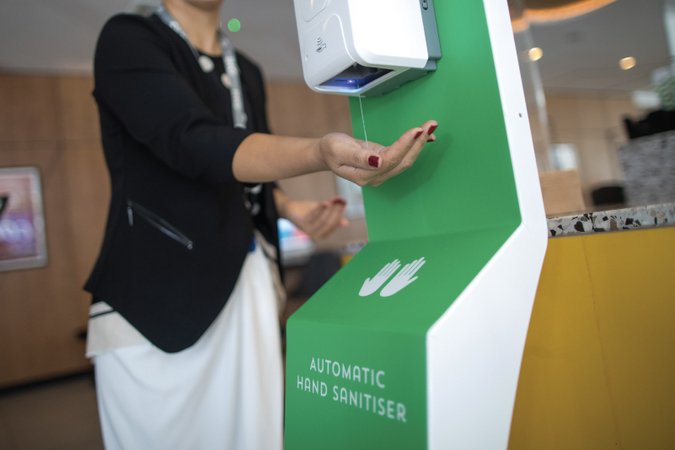 Public health professionals have recommended frequent hand-washing to guard against covid-19. If soap and water are not readily available, the Centers for Disease Control and Prevention recommends using an alcohol-based hand sanitizer with at least 60 percent ethanol. (Chris Ratcliffe/Bloomberg)

WASHINGTON - Federal regulators have recalled dozens of hand sanitizers - many widely available through Walmart and other national retailers - because they contain dangerous and potentially fatal levels of wood alcohol.

Hand sanitizer demand has skyrocketed during the pandemic as Americans were urged to wash their hands often to guard against the coronavirus. That's sparked a slew of new brands to rush into the market. But the Food and Drug Administration has identified at least 77 brands that say they contain ethanol (also known as ethyl alcohol) on their labels but later shown to contain methanol, or wood alcohol.

Methanol can be toxic when absorbed through the skin, the agency said in an advisory, and can cause blindness. It can be lethal if ingested.

Because the products are mislabeled, consumers wouldn't be able to tell which hand sanitizers actually contain methanol. The FDA keeps a running tally of the recalled products on its website.

The recalled products are manufactured by various companies, all in Mexico, and have been carried by such retailers as BJ's Wholesale Club, Costco and Walmart. The FDA included several types of Blumen brand hand sanitizer on the recall list and said an import alert was attached to them earlier this month to prevent them from entering the country.

At the onset of the U.S. outbreak, Americans loaded up on hand sanitizers, disinfectants and other household cleaning supplies to combat the virus. In turn, many companies shifted their production efforts to meet the heightened demand, including distilleries that pivoted to making hand sanitizer instead of alcoholic beverages. But the run on hand sanitizer also attracted new manufacturers that failed to ensure rigorous product quality.

Since May, at least seven people have died and dozens have been hospitalized in Arizona and New Mexico after ingesting hand sanitizer containing methanol, according to state health officials. At least some of the cases were related to alcoholism, officials have said. Though hand sanitizer should not be consumed, some people have been drawn to its high alcohol content.

The FDA also advises Americans to be wary of products that claim to be "FDA-approved," as none exist, or say they provide protection for "up to 24 hours."

The agency encourages health professionals and consumers to report adverse affects or product quality issues with hand sanitizers on its website.

Public health professionals have called frequent hand-washing as a key defense against covid-19. If soap and water are not readily available, the Centers for Disease Control and Prevention recommends people use an alcohol-based hand sanitizer with at least 60 percent ethanol.