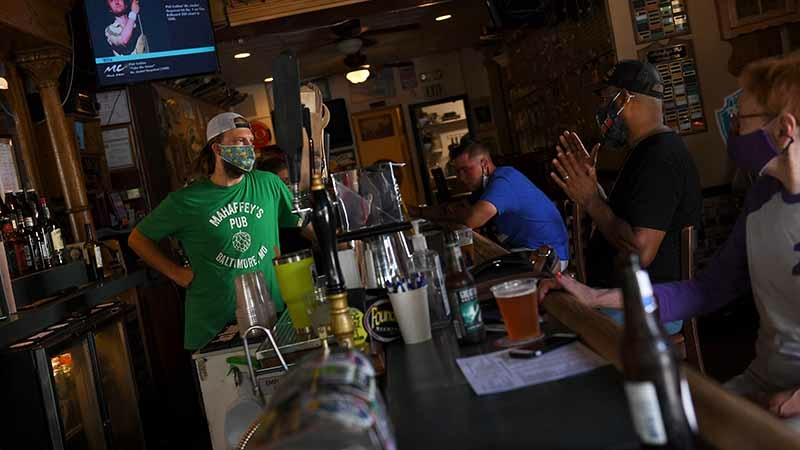 Dennis Kistner, owner of Mahaffey's Pub in Baltimore's Canton neighborhood, chats with customers from behind the bar on Thursday. With spikes in coronavirus infections, restaurants and bars in Baltimore have to close down indoor seating on Friday. MUST CREDIT: Washington Post photo by Katherine Frey

The line graphs are climbing again.

Coronavirus cases have surged in Maryland, the District of Columbia and Virginia after more than a month of declines and plateaus, prompting fears of a spike similar to what is happening elsewhere in the country.

Washington-area officials are concerned and taking action: The District of Columbia expanded its mask mandate and ordered people coming from hot spots to quarantine, Virginia ramped up enforcement, Baltimore suspended indoor dining and Anne Arundel reimposed caps on the sizes of social gatherings.

Experts agree that the numbers are alarming, and they say governments would be wise to shut down bars and indoor dining, and require face-coverings, in most parts of the region. But they say it is too early to tell whether the three jurisdictions are headed toward a deadly resurgence of the virus - driven mostly by localities outside the immediate Washington area - that would warrant more drastic measures.

Part of the uptick is the result of more testing, which is why the real metric to watch is test positivity, said Tom Inglesby, the director of the Johns Hopkins Center for Health Security and an adviser on the pandemic to Maryland Gov. Larry Hogan, R.

So far, Maryland's positivity rate has stayed below the 5% mark that the World Health Organization considers safe for resuming some normal activities. But it is higher in certain counties and for specific demographics: Test positivity for people younger than 35 was above 6.5% in Maryland this week, officials say.

The surge in both Maryland and Virginia appears to have leveled off in recent days, although Maryland reported 930 new cases on Friday, the most in a day since early June. Virginia's positivity rate has crept from a low of 5.8% in late June to 7.7% this week.

If rates continue to accelerate, officials should act swiftly to pull back on the reopening, Inglesby said, noting that governments in the South were slow to do so.

The bulk of recent infections have been located in specific places - the Baltimore metropolitan area and along the coasts of both Maryland and Virginia - and among younger adults who are less likely to experience severe symptoms.

In Maryland, infections for those under 35 are surging as contact tracers find clusters of cases linked to parties, bars and restaurants. In Virginia, the Hampton Roads area has emerged as a hot spot, led in large part by vacationers and younger adults ignoring requirements for masks and physical distancing. And in D.C., while the positivity rate has bounced downward, hitting 4 percent this week, a growing number of cases are linked to young residents traveling to other parts of the country that are spiking.

Hospitalization and mortality rates have not increased along with infections, which could be in part because it usually takes weeks for the virus to seriously sicken and kill people. In addition, young people generally tolerate the virus better than older people. But if those young people infect their parents, grandparents and neighbors, hospitalization rates could spike too.

Some rise in cases was not unexpected, given the loosening of restrictions after a prolonged economic shutdown, experts say. But how the region will react - and be impacted - still hangs in the balance.

"What we're trying to avoid is the situation where cases shoot up uncontrollably," said Anne Arundel health officer Nilesh Kalyanaraman. "The challenge is we can only really tell in retrospect where that tipping point is."

Business owners say the infections are driven by out-of-state vacationers and young adults drawn to the beach by warm weather and social activity.

After Delaware ordered beachside bars to close ahead of July Fourth weekend, Ocean City saw thousands of visitors descend onto its boardwalk. Soon, dozens of restaurants - about 8 percent, said the local chamber of commerce - closed because employees had contracted the virus.

"A lot of people are coming to Ocean City because it's more open than other resort areas," said David Schroder, a manager at Ocean Gallery, a framing business on the boardwalk. "To me, it's more people than should safely be here."

On busy days, social distancing "does not exist," on the boardwalk, said Timur Unal, manager of pizza restaurant Piezano's, which chose not to allow dine-in services even when the restriction was lifted in June.

As the weather warms, families are joining younger revelers on the beach, Unal said. Many are in "vacation mode," he added, reluctant to wear masks or keep their distance.

According to research from the Maryland Transportation Institute, which tracks human traffic based on cellular phone data, out-of-state travel in and out of Worcester County was about 18 percent of the total trips logged in April, during the shutdown, but 41 percent of total trips in July.

As states reopened, researchers have seen the number of trips, frequency of out-of-state travel and miles traveled per person trend upward, sometimes exceeding what they were in the weeks preceding the pandemic, said Aref Darzi, a project researcher with the Institute.

In Virginia and Maryland, the percentages of out-of-state travel in July have surpassed what they were in the first two weeks of March, before coronavirus restrictions were put in place.

But it is not just outside visitors driving new cases, experts say. Struck by quarantine fatigue, local residents are traveling more frequently and spending more time at bars, restaurants and parties.

In Carroll County, the site of one of the region's worst nursing home outbreaks, the caseload had consisted primarily of infections in congregate settings. That changed last week, when all 37 new cases were reported within the community, said health officer Ed Singer. The median age of infected individuals this month has dropped from 63 to 57.

"People are going out of state and bringing it back here," Singer said, adding that those testing positive often report having recently attended weddings, parties, or other social gatherings outside Carroll.

In Washington, people under 40 make up 66% of new cases since July 1, up from 41% in the months prior. Health director LaQuandra Nesbitt said a growing share of infections seem to be linked to young residents engaging in nonessential travel.

"They are going to places like Florida, Texas, North Carolina . . . and then participating in some of those things that are part of our phase 2 reopening, such as activities in restaurants, and more of the family gatherings," Nesbitt said.

"It's the nature of being 20-something," said Maura J. Rossman, health officer for Howard County, Md., where cases are rising dramatically for people under the age of 35. "They socialize differently. They enjoy going outside, going to restaurants and bars, hanging with their friends."

At the same time, younger adults are more likely to work jobs considered essential, which makes it harder for them to avoid community spread of the virus, Rossman said.

At the Magruder's grocery and wine store in northwest Washington on Thursday, a steady stream of customers walked out with shopping carts filled with beer and other beverages, some with watch-party plans for the National's opening game that evening.

Daniel Crystal, 22, carried a case of Bud Light and a few other beverages - enough for the gathering he'd attend in a friend's backyard, where a giant screen projector would be set up for the game.

Crystal -- who is living with his parents in Maryland after graduating from the University of Virginia last month -- said he expected everyone would keep their distance from one another. But he admitted that, until recently, he has not been very vigilant about wearing a mask or limiting his exposure in other ways.

"I think D.C. is still doing pretty well," he said about the recent uptick in infections. "We're a little bit better than some other areas. But I'm also not being super reckless."

Washington resident Dani Hupper, 25, said she has not been to any bars or parties since the pandemic began, but went camping at Pohick Bay with her boyfriend over July Fourth weekend, which is where she suspects she contracted the virus.

The campsite was "packed," she said. Even though she did not speak to other people, she used a public restroom where other campers were unmasked.

After she tested positive, two of her roommates in a Dupont Circle group home left to quarantine elsewhere. Hupper informed everyone she had come into contact with that she had gotten the virus, then scheduled their test dates into her calendar so she could track their results. Some of her friends had to cancel travel plans; others got into fights with partners over the possible exposure.

It has been a period of high anxiety, she said, even though her symptoms have been minor and no one she knows has tested positive yet.

"I truly lived in fear these past couple weeks that I was going to get a text message that my friends or their parents were feeling symptomatic," Hupper said. "There's a social toll."

The spikes in specific places and populations have triggered calls for more sweeping action.

Virginia Gov. Ralph Northam, D, has restricted bar areas inside restaurants and pubs to small groups who are eating and plans to make the cutoff time for alcohol sales earlier than midnight, while D.C. Mayor Muriel Bowser, D, imposed one of the strictest mask mandates in the country and, on Friday, issued her quarantine order for those coming to the city for nonessential travel from places where the virus is spiking.

Hogan so far has left it up to individual counties and cities whether to tighten restrictions. But officials in Howard, Anne Arundel and Baltimore counties and Baltimore City questioned that approach, saying a state-led strategy was necessary given the degree of travel within Maryland.

"The reality is we're not an island," said Rossman, the Howard County health officer. "It's not going to be effective if we all take different actions."

Michael Ennis, assistant general manager at Kelsey's Restaurant, Irish Pub & Banquet Room in Howard County, said most restaurants in the county close by 10 p.m., but younger residents often travel to nearby Baltimore City for bars that stay open into the early morning.

The Baltimore metropolitan area recently overtook Maryland's most populous counties -- Montgomery and Prince George's -- in new daily infections. The city's positivity rate has jumped to 6.8%, from 5.2% earlier this month. Some neighborhoods, including trendy Canton and Patterson Park, have positivity rates as high as 22%.

Health Commissioner Letitia Dzirasa said the city has seen a "dramatic rise" in cases of people under the age of 40, a "disproportionately high" positivity rate in the southeast section of the city and a doubling of its caseload in the last month.

The city on Thursday said it would suspend indoor dining staring this weekend.

Charlie Gjerde, whose five restaurants in the city includes Huck's American Craft in the hard-hit Brewer's Hill area, said he will have to let go at least 15 of his employees with fewer tables to fill and less meals to cook. "We had just started getting the momentum going," Gjerde said. "Now, all that goes away."

If infections continue to trend upward, more restrictions could be on the horizon - a fate that public health experts hope to avoid by sounding alarm bells early.

Dennis Kistner, who co-owns Mahaffey's Pub in Canton, said when restrictions were first lifted, locals were bar hopping, and people held barbecues and went to house parties. Some of his pub's patrons were "standoffish" about wearing masks or keeping distant from one another, he said.

"Epidemiologically, we knew we were going to see another peak," said Singer, the Carroll health officer. "Right now, we don't know where that peak is going to end. A lot of that depends on what people do next."