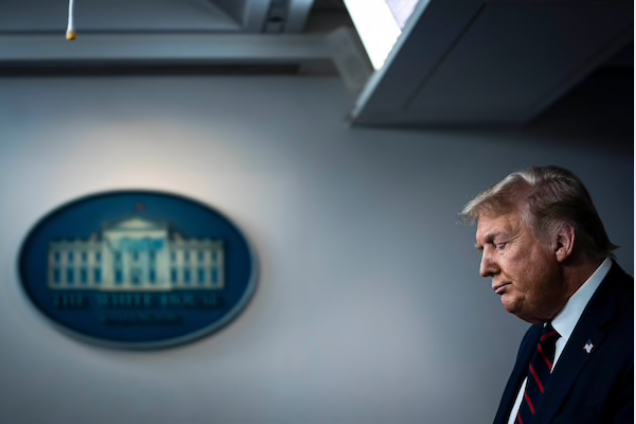 The United States edged closer to a single-day coronavirus infection record with more than 74,000 new cases Friday, approaching the mark set just one week ago, as the pandemic that has burned through the country for months shows no sign of easing.

More than 1,000 Americans have died in each of the past four days, the worst tally of human loss since late May.

Even as President Donald Trump insists that children must return to school in a matter of weeks, the nation appears no closer to controlling this worst-in-a-century medical emergency than it was months ago.

The number of patients hospitalized with covid-19 has roughly doubled over the past month as the disease caused by the novel coronavirus tightened its grip on states such as California, Florida, Texas and Arizona. U.S. hospitals treated 59,670 people on Friday, just shy of the mid-April record of 59,940, according to the Covid Tracking Project.

At least 143,000 Americans have died of covid-19 and more than 4.1 million have been infected, according to data tracked by The Washington Post. As of Saturday afternoon, the seven-day averages for new cases hit fresh highs in California, Mississippi and Indiana and tied for the highest figures in Montana and North Dakota, according to The Post's tracking. South Carolina posted its worst daily death toll.

The galloping outbreak appears to have bested efforts to return the economy to normal functioning, at least for now. After regaining almost one-third of the nearly 21 million jobs lost when most nonessential businesses closed this spring, the U.S. economy appears to be losing momentum.

"The labor market recovery is stalling due to the worsening virus situation," Goldman Sachs warned in a note to clients.

Workplace activity has slumped in the hardest-hit states and is plateauing elsewhere, leaving the number of Americans working "roughly unchanged" over the past month, the bank said.

A new Census Bureau survey of U.S. households was even more downbeat. It found 5 million fewer Americans saying they were employed than in a similar survey two weeks earlier.

"The July employment report may well show a net loss of jobs for the month," wrote economist Bob Schwartz of Oxford Economics.

The economy is set to suffer a further blow within days as funding for enhanced unemployment benefits and a federal moratorium on evictions both expire. The Senate recessed for the weekend, with Republicans unable to unite behind an alternative to House Democrats' proposed $3 trillion economic rescue legislation.

Lawmakers had spoken of reaching a deal before the end of the month, when millions of jobless Americans will see their additional $600-per-week benefits vanish. But Senate Majority Leader Mitch McConnell, R-Ky., said Friday he hoped for a compromise, including funding for schools and health programs, "in the next few weeks."

Any measure is likely to be the last legislative remedy for the pandemic-inspired recession before the November election.

Allowing the enhanced jobless aid to expire would carve a $1.2 trillion hole in the economy, according to Oxford Economics. Employment would fall by an additional 1 million workers compared with the situation if the benefits were extended.

Notes of caution were also sounded on the medical front. Anthony S. Fauci, the nation's top infectious-disease expert, said states hit hard by the virus in recent weeks need to halt or reverse their reopenings while they grapple with infection surges. During a live interview with The Post, Fauci said a coronavirus vaccine would probably not be "widely available" until "several months in" to 2021.

Many patients with milder coronavirus symptoms continue to report health issues two to three weeks after testing, according to a report from the Centers for Disease Control and Prevention. In a telephone survey, 35 percent told researchers they had not returned to their previous state of health. Even among those aged 18-34 with no underlying health issues, 1 in 5 said they continued to feel subpar.

The Food and Drug Administration is warning consumers that at least 77 hand-sanitizer products may contain methanol, a toxic compound that can cause blindness or even death.

In states where cases have ballooned, officials are weighing additional public health measures to slow the spread of the virus, even as they battle resistance from some quarters.

In Washington state, a federal judged rejected a legal challenge to Gov. Jay Inslee's coronavirus edicts. While Republican state lawmakers argued for a preliminary injunction against the Democratic chief executive's use of emergency powers, which they called unconstitutional, U.S. District Court Judge Benjamin Settle ruled that other state officials, not Inslee, were responsible for enforcing the orders.

The Supreme Court denied a Nevada church's plea that coronavirus-related restrictions on houses of worship unlawfully treat them worse than the state's famous casinos.

In Michigan, the entire football team for Michigan State University will quarantine after a second staff member and one athlete tested positive for the coronavirus on Thursday, the university announced Friday.

As measures to protect public health have been flouted by some who say they infringe upon individual liberties, nearly 800 bar owners in Texas said they would participate in "Freedom Fest" on Saturday, and openly defy a June 26 order by Gov. Greg Abbott, a Republican, to shut down. Hundreds of bars will reopen, serving alcohol and offering live entertainment, the Fort Worth Star-Telegram reported.

Even as the pandemic rages, an information battle to define it continues.

A conservative television network on Saturday canceled a planned program advancing a baseless conspiracy theory that Fauci was responsible for the creation of the coronavirus. The allegation originated with the former medical researcher behind the debunked "Plandemic" documentary.

Amid fierce criticism, Sinclair Broadcast Group on Saturday said it had decided to postpone the program to bring together "other viewpoints and provide additional context."

The "America This Week" program would have featured host Eric Bolling interviewing former researcher Judy Mikovits, who claims that Fauci "manufactured" the coronavirus and shipped it to Wuhan, China, where the outbreak began. A chyron during the segment reads: "DID DR. FAUCI CREATE COVID-19?"

The segment was first reported on by Media Matters, a liberal media watchdog.

In a statement on its Twitter account, Sinclair, which has 191 stations, insisted it was not "aligning with or endorsing" Mikovits's views and insisted it supported Fauci "valiantly."

Bolling later told The Post that "this segment does need to be reworked to provide better context, and as such we are delaying the airing of the episode for one week."

"Let me also add that I have immense respect for Dr. Fauci and recognize him as the leading expert on this topic," he said in a statement. "For the past two months, I have consistently pursued the opportunity to bring Dr. Fauci on air so that he may provide critical information to the public about the virus. The invitation stands."

A Sinclair spokesperson and Mikovits did not immediately respond to The Post's requests for comment.

Also Saturday, Hurricane Hanna, the first hurricane of the 2020 Atlantic season, threatened to complicate efforts to social distance as coastal communities in Texas prepared to shelter in place. Hidalgo County Judge Richard F. Cortez told residents to bring soap and hand sanitizer with them if they are forced to evacuate their homes.