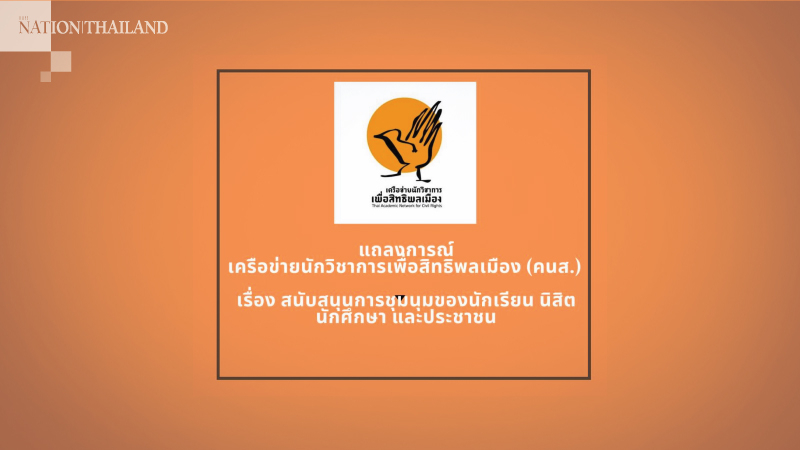 The Thai Academic Network for Civil Rights issued a statement on July 25 asking authorities not to prohibit youth-led protests.

Thai academics have thrown their support behind youth-led protests against the government, citing freedom of expression.

The Thai Academic Network for Civil Rights issued on Saturday a public statement supporting student-led nationwide protests against the government.

The academic group said protesters have exercised their rights in line with democratic politics, so authorities could not prohibit them from participating in such protest activities.

The academics have stated four points about the ongoing protests, which have intensified in recent days in many provinces across the country. They said:

▪︎Authorities must not prohibit peaceful demonstration by citing the emergency decree or using force against protesters. They must not intimidate students directly or indirectly via school or university administrators.

▪︎School and university administrators must have moral courage and ensure students' safety for their freedom of expression activities held in educational compounds.

▪︎State authorities must not  take legal action against students and people joining the protests. And previous legal actions against protesters must be dropped.

▪︎Students' parents have to promote freedom of expression and protect their political rights. Given that school students are now targeted for intimidation by state authorities, parents must not become a tool of the authoritarian regime using schools’ regulations to suppress their freedom of expression.