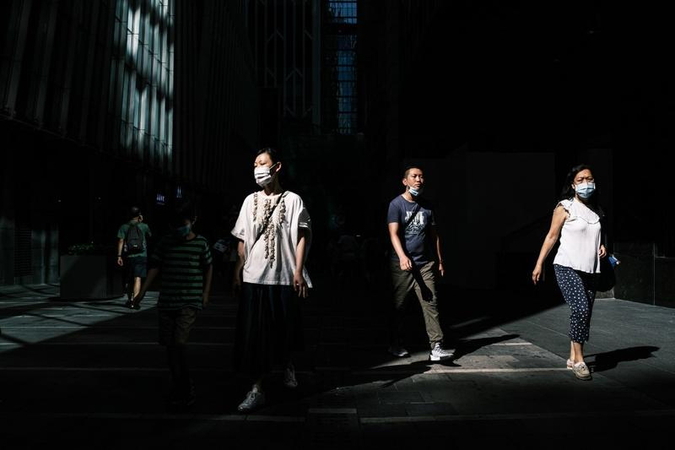 Pedestrians walk in an alleyway between commercial buildings in Hong Kong on July 22, 2020. (ANTHONY WALLACE / AFP)

Permanent residents of the Hong Kong and Macao special administrative regions holding no foreign passports will be permitted to apply for jobs at government institutions in nine cities in Guangdong province, said a provincial human resources authority.

The move is aimed at promoting talent exchanges between Guangdong, Hong Kong and Macao, and provides more job opportunities for young people from the two SARs.

According to administrative measures promoting public recruitment of Hong Kong and Macao residents recently issued by the Guangdong Human Resources and Social Security Bureau, permanent residents of Hong Kong and Macao are allowed to apply for jobs at government institutions in Guangzhou, Shenzhen, Zhuhai, Foshan, Huizhou, Dongguan, Zhongshan, Jiangmen and Zhaoqing, all of which are included in the Guangdong-Hong Kong-Macao Greater Bay Area.

Government institutions are institutional organizations set up by governments and State-owned assets providing public services such as education, science and technology, culture and healthcare.

According to the measures, Hong Kong and Macao residents, once they are recruited, will be treated on equal terms with their counterparts from the Chinese mainland with regard to salaries, pension plans and healthcare.

A growing number of young people from Hong Kong and Macao have been looking for opportunities to work on the Chinese mainland following the unveiling of the outline development plan for the Greater Bay Area in February last year.

"The Greater Bay Area has developed rapidly, offering a precious chance for us to gain experience before graduation," said Mak Chiyeung, a Hong Kong participant and senior at Jinan University in Guangzhou.

"I applied last year but failed to attend because of a timing problem. I signed up again this year despite the pandemic because I am looking for a job in Guangzhou after graduation," Mak said.

Since 2016, Nansha district, located in the heart of the Greater Bay Area, has organized the internship program for five consecutive years, involving more than 1,500 Hong Kong and Macao students.

In addition, Guangzhou Metro Group Co Ltd and Hong Kong University of Science of Technology have recently signed a cooperation agreement to jointly nurture the university's postgraduate students into experts on intelligent transportation.

The program is set to groom all-around talent with special training in innovation and professional skills involved in intelligent transportation－a new field which combines transportation, artificial intelligence and data science.

The students will be provided with internships and research opportunities at Guangzhou Metro, with the company sponsoring the students' training and living expenses during their study period.